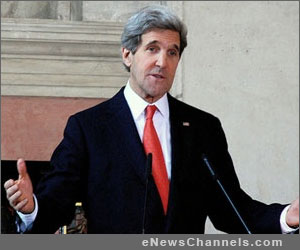 WASHINGTON, D.C. /eNewsChannels/ — As the United States celebrates the 23rd anniversary of the Americans with Disabilities Act this week, Secretary of State John Kerry met today with senior representatives of veterans, religious, business, and disability rights organizations, all of whom are advocates for the Disabilities Treaty.

Secretary Kerry noted that yesterday was the 90th birthday of one of the foremost advocates for the Treaty, former Republican Senate Majority Leader Bob Dole, and thanked Senator Dole for his leadership.

Over 50 million Americans have a disability, including 5.5 million of America’s veterans. Treaty advocates renewed their commitment to make the world more accessible for Americans with disabilities when they leave our shores.

An increasing number of Americans, including veterans and service members, want to serve, study, work, and travel overseas. Many Americans with disabilities, and families with a disabled child, do not have this opportunity because other countries often lack legal protections and standards as effective as those in the United States.

Secretary Kerry noted that ratification is the single-most important step the United States can take to promote our accessibility standards internationally.

It will help ensure that American with disabilities can serve, study, work, and travel abroad with the same dignity and respect that they enjoy here at home.

It will create new markets for U.S. businesses to export accessible products, technologies, and expertise.

And it will reinforce America’s global leadership and improve our ability to advance disability rights worldwide without requiring any changes at home.

Specifically, the Treaty will not affect the balance of power between the Federal Government and the states, nor will it infringe upon parental authorities for educating their children.

Ratification will protect the authority of parents in the United States to raise their children as they see fit, including making their own decisions about education, home schooling, and parental discipline.

Secretary Kerry, who last year as Chairman of the Senate Foreign Relations Committee worked to secure a big bipartisan vote in the Committee before the Treaty fell just a few votes shy of approval on the Senate floor, emphasized his personal commitment to raise awareness of the Treaty’s benefits for the United States and Americans with disabilities.