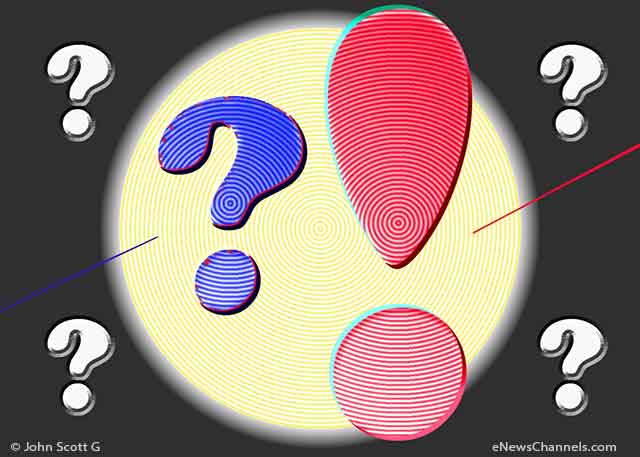 What’s the difference between polling and propaganda? Legitimate poll-taking is a research activity in which the current knowledge of the electorate is revealed. Propaganda polling from rightwing organizations emphasizes the mental aberrations of frightened, stunted, and racist simpletons.

There appear to be approximately 3,457,862 polling organizations in America today. Even as you read this, opinion research is being conducted by phone, by mail, and in-person. You may be the next person they contact. (Sorry to be fear-mongering like that, but when writing a political column that’s kinda-sorta my job.)

The idea behind most legitimate polling is to get answers from a large enough number of people to reveal statistically relevant data about the mood of the electorate.

However, the idea behind most rightwing nutjob polling is to ignore context, twist reality, and just generally make shit up.

Poll responses reflect the ideas of the pollsters as well as those who are contacted. Let’s take the target audience first. If you reach out to decent Americans and ask questions, you get one result; if you reach out to the morons, crazies, and racists in the GOP, you get very different results from those same questions. Allow me to illustrate:

“Most people favor giving I.Q. tests to political candidates” might be the response from a poll that contacted a cross-section of Democrats and Independents. But if the same questions were directed to Republicans, the top answers might be “Ah don’t like no tests nohow” and “Whut the hell’s an eye-cue test?”

If you extend your polling to contact GOP auxiliary organizations such as Libertarians and Ku Klux Klan members, the response might be “Some voting groups favor mentally-challenged candidates.”

It’s not just a matter of a skewed target audience. Poll results change because of the way pollsters phrase their questions. What follows is an extended illustration of the situation in which we compare legitimate poll questions, better poll questions, and rightwing nutjob poll questions:

Legit Poll Question: How do you rate the Republican Party’s actions regarding the nation’s fiscal crisis?

Better Poll Question: How angry are you with the Republican Party for causing the nation’s fiscal crisis?

Legit Poll Question: Do you believe the Republicans in Congress will ever try to work with Democrats, Progressives, and Independents for the common good?

Better Poll Question: Do you believe that Republicans are even capable of working for the common good?

Legit Poll Question: How important is a Democratic majority in the House of Representatives to achieve a better country?

Better Poll Question: How important is it to marginalize or eradicate conservatives and the goons in the Republican Party in order to realize a better America?

Legit Poll Question: How important is it to get money out of the political process?

Better Poll Question: How important is it to undo the Supreme Court’s irresponsible Citizens United decision?

RWNJ Poll Question: Allow me to introduce you to the vitally important political action committee called American Citizens for Patriotic Liberty and Freedom Enterprise Heritage Institute for the Americanization of the United States of America Freedom Foundation (formerly the Eternal Vigilance In Leadership Global Outreach Project until someone noticed the acronym).  How much are you able to contribute today? Can you give $5? Or $50? Or $889,000,000?

Legit Poll Question: Do you think everyone should pay their fair share of taxes?

Better Poll Question: Do you think corporations, billionaires, and millionaires should be made to pay their fair share of taxes?

RWNJ Poll Question: When you become rich, do you think it will be important that Republicans let you pay a lower tax rate than any of your workers?

Legit Poll Question: Should George W. Bush, Dick Cheney, and Donald Rumsfeld be sent to The Hague to be prosecuted for war crimes?

Better Poll Question: How soon should George W. Bush, Dick Cheney, and Donald Rumsfeld be sent to The Hague to be prosecuted for war crimes?

RWNJ Poll Question: Should more airports and schools be named after Ronald Reagan?

Legit Poll Question: Do you support Hillary Clinton or Bernie Sanders for President?

Better Poll Question: Who will move America forward the most: a centrist like Hillary Clinton or a true progressive like Bernie Sanders?

RWNJ Poll Question: Notice that “Hill-ah-ree” is very close to “Ben-gah-zee.” Is that a coincidence or very suspicious?

Similar examples could be written for other important topics, such as equal pay for equal work, improving education, achieving energy independence, and common sense immigration reform. In addition, here are some of the questions I want to see on a nationwide poll:

* Do you think the GOP should be held accountable for not authorizing requested security for our post in Benghazi?

* If you had to vote for a member of the American Taliban, would it be Jeb, Ted, Marco, Scott, or Rand?

* Should the bankers who caused the most recent Republican Recession be put on trial?

* Should convicted fraudster Angelo Mozillo (former head of Countrywide who bears a great deal of responsibility for the housing market crash) be put in front of a firing squad?

* Should Bernie Madoff be raped in prison on a pay-per-view special?

All of those questions should be put to the citizenry on a daily basis. Meanwhile, let me conclude with this:

Legit Poll Question: Should we work towards eliminating gun violence?

Better Poll Question: How important is it to have background checks on all sales or transfers of guns?