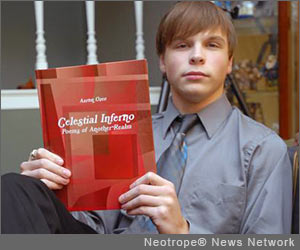 ADDISON, Ill. /eNewsChannels/ — Published at age 16, poet Aaron Ozee has written and self-published four poetry books through the self-publishing company, Lulu. “Celestial Inferno: Poems of Another Realm,” initially released in hardcover, now will be available as an eBook and Kindle Edition through major retailers such as Amazon, Barnes and Noble, Kobo Books, and more.

The transition into the virtual world will hopefully prove to be successful upon the book’s re-release into the eMarket and will truly mold Ozee’s future for the better.

Newspapers like My Suburban Life, The Lombardian, Lemont Report, and The Addison Press, have already featured this poet in multiple issues, but Ozee is still seeking that one golden moment of fame.

Beginning to write so young, Ozee always found converting his inner thoughts and feelings into the written word was the best way to show others his intelligence. At the simple age of 5, Ozee had begun to develop a series of children stories, dealing with fictitious characters such as “Arro” and “The Hungry Grab.” Later on, Ozee would alter his direction from children’s books and into short stories, and within just a short year, between the ages of 9 and 10, he handwrote over 35 short stories, each ranging between 10-30 pages in length.

Ozee’s parents immediately noticed that this wasn’t just another hobby for him, that it was something more than an average skill, but a creative gift that would forever remain within his grasps for years to come.

“Never did I think that he would actually make something out of all this, I mean, it astounds me just to see him achieving so much within such a short amount of time,” said Ozee’s mother.

Challenging himself, Ozee tested his skill on all ends, attempting to construct both fictional and non-fictional novels at the steady ages of 12 and 13, but never published them due to lack in grammatical efficiency and financial contributions. Though Ozee was compelled to overcome many obstacles along the way, it didn’t stop him one bit from discovering, in the early months of his 14th year, that poetry was his true calling in the written world.

Teachers from both his eighth grade and freshman classes took strong interests in Ozee’s work and requested if he would reward their ears with fresh and youthful words of poetic beauty. Eventually, Ozee’s desire to one day become one of the youngest published authors in the world at last came true in February 2012, halfway through his sophomore year, by self-publishing his first titles with world-leading online self-publishing company, Lulu.

Since then, Ozee has continued to be recognized around the world for his inspirational success and consistent creativity in the poetry-publishing industry. If you should wish to contact Aaron Ozee directly, you may email him at Lumidrone@yahoo.com, for any further questions or requests for interviews or television appearances.

The Kindle Edition of “Celestial Inferno: Poems of Another Realm,” is available on Amazon at: http://amzn.com/B00C9PEW3U .