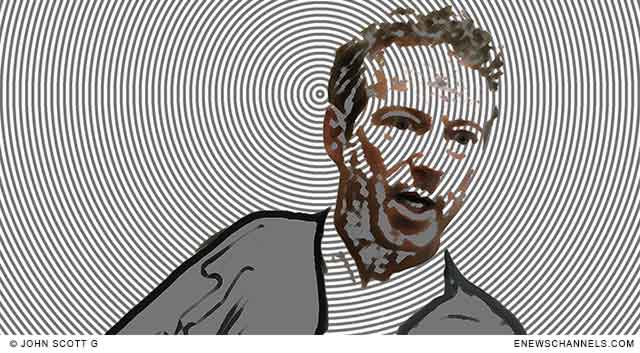 Rand Paul is too small to be President of the United States. It has nothing to do with his height. He is tiny in spirit, diminutive in humanity, and lacking in morality. In short, he is a twisted, stunted, sorry husk of an excuse for a human being.

That being said, he will make a wonderful Republican presidential candidate.

Consider the humorous aspects of such a thing:

(1) Rand Paul is a racist who is now pretending to reach out to black and Hispanic voters.

(2) Rand Paul is a plagiarist who is now pretending to have original policy positions.

(3) Rand Paul is an isolationist who wants war with Iran.

Rand Paul has a speaking style that combines the whininess of George W. Bush with the shoot-your-own-foot approach of his father, perennial joke candidate Ron Paul. The elder Paul is a Libertarian, which translates roughly as “A rightwing nutjob with an unwarranted superiority complex.”

With much diligence and no small amount of brib– um, incentives — we have obtained a copy of a portion of a Comprehensive Cognitive Assessment performed on Rand Paul during the last six months. We are pleased to present it for your edification:

Subject is a 52-year-old Caucasian male, raised in privilege and insulated from many aspects of real-world activities usually found in normal human existence. As a result, there is significant cognitive dissonance in his behavior. Following in his father’s footsteps, he has embraced abhorrent views of race, allowing a sub-human creature calling itself the Southern Avenger to write biographical materials and position papers which he utilized to promote his political career in one of the states of the Old Confederacy.

Subject regularly displays an inability to confront the irrationality of his many conflicting positions. For example, subject alternately claims to oppose and support aspects of the Civil Rights Act. In a comparable matter, subject speaks out on the Voting Rights Act and various state efforts to suppress voting rights, again both supporting and opposing the laws. Similarly, subject has consecutively favored and rejected positions on marriage equality and abortion rights.

In 2011, Paul proposed a budget without foreign aid for any nation, including Israel. When asked about that by ABC News, he defended his position and asked, “Should we be giving free money or welfare to a rich nation? I don’t think so.” Many months later, when asked about his idea of cutting aid to Israel, he stated, “I haven’t really proposed that in the past.”

When confronted with proof of his recurrent contradictions, subject adamantly and sometimes petulantly denies such inconsistences exist. Some elements of a persecution complex or even nascent paranoia are evident — these manifest themselves whenever subject claims that those who point out his conflicting statements are part of a “liberal media conspiracy.”

Similarly, subject vehemently denied reports of his plagiarizing speeches and position papers until confronted with the proof, whereupon subject continued attempting to deny his actions while seeking to shift blame.

Possible incidence of psychosis is readily apparent in patient’s grandiose delusion of becoming President of the United States, or, as he described the position in a private conversation, “Head of a Government I Intend to Destroy.” While some of the subject’s mental aberrations may be congenital, others were assuredly instilled and therefore familial interaction should be avoided. Subject negates any symptoms of depression or anxiety. He also denies any hallucinations or delusions. There is little evidence of psychomotor agitation or retardation. Overall, his judgment seems limited.

The patient demonstrated variable cooperation during the interview sessions and required frequent redirection to respond to questions. Subject’s thought processes can be markedly tangential. Some mental retardation is suspected but there is no psychomotor agitation. He denies experiencing auditory or visual hallucinations although, as noted above, paranoid delusions are frequently in evidence.

Subject often appears alert and oriented to person and year. Memory seems intact as to names of his peers and, especially, donors. Insight of the subject is not strong as evidenced by his repeated vacillation regarding political positions. Subject’s judgment is poor as evidenced by his longstanding pattern of advocating radical, impractical, and anti-humane political “solutions” not in the public interest.

This office is in receipt of written and verbal statements from a number of individuals who interacted with the subject in the state of Kentucky, in the United States Senate, or on the campaign trail. A representative sample follows:

* Another staffer in a different peer’s office, put it slightly differently: “Rand Paul is a f#@king twit.”

* A political consultant summed up the subject’s character thusly: “Considering that Rand Paul worked with the ‘Southern Avenger,’ he’s just an LSS.” When asked about that acronym, “Little Stool Sample” was the reply.

* A Kentucky voter, assessing the positions of Rand Paul and his father, Ron, stated that “The noose doesn’t fall far from the tree.”