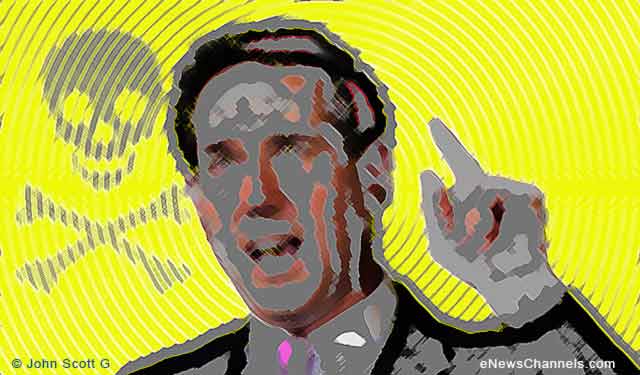 With a deficit of intellect and a surfeit of bile, Rick Santorum is scrambling to find enough numbskulls to bankroll another failed run for the presidential nomination of the American Taliban Party. If it weren’t for the entertainment value of his snide and sniggering superciliousness, Santorum’s main qualification would be that he’s a killjoy.

When the conversation turns to disgusting political candidates, Republicans naturally top the list. Good and bad people are found in all other parties (among Democrats, the name Rod Blagojevich comes to mind), but as a matter of structure and standards there are no good people in the Republican Party.

The truth of that conclusion stems from the basic goals of the GOP, including their homophobia, misogyny, xenophobia, plutocracy, theocracy, war mongering, and all manner of inequality from race to voting to finance. If you align yourself with a party that is anti-women, anti-students, anti-children, anti-education, anti-veterans, anti-poor, anti-ill, anti-elderly, anti-non-whites, and anti-non-Christians, you are slime. You are scum. You are human detritus.

So, speaking of slimy Republican candidates, here comes Rick Santorum, a man who takes scummy to new heights of depths.

At one point earlier this year I was able to speak with a couple of for-hire political operatives who speculated about Santorum’s campaign for the presidential nomination of the American Taliban Party, otherwise known as the GOP. The two of them had hoped to be hired to work on that doomed cause but apparently they didn’t get the gig because the two guys now have nothing good to say about Righteously Ridiculous Rick (R3), as they sometimes refer to him.

“Hey, we also call him RSBS,” one of them told me.

“And don’t forget how well he fits the wonderful summary of GOP candidates from Mark Twain,” the other one said.

Professionalism of a Sort

In the speeches and position papers of Rick Santorum, a distorted portrait emerges, one that defines the man as:

– horrified by the human body

– a worrywart in matters of triviality

– excessively concerned about others’ propriety

This is a person who is a pedant, a prude, and a busybody. In other words, Rick Santorum is a professional prig.

Everybody’s Good at Something

Having been educated far beyond his ability to reason, Santorum is little more than an unfunny buffoon. It is embarrassing to watch as he devotes his mind to an intricate series of minutia. If one were to peruse his college transcripts, he undoubtedly received high marks in such courses as “How Many Imaginary Angels Can Dance on a Pinhead 101” and “Hypocritical Religiosity 301.”

* Santorum inexplicably railed against John F. Kennedy for his classic speech on separation of church and state

* Santorum displayed one aspect of GOP racism when he said he didn’t want to “make black people’s lives better by giving them somebody else’s money.”

* Santorum revealed ignorance combined with prejudice when he compared homosexuality with what he called “man on child” and “man on dog” sexual relations.

* In attempting to explain why he opposed same-sex marriage, Santorum equated marriage equality with polygamy: “So, everybody has the right to be happy?” he said. “So, if you’re not happy unless you’re married to five other people, is that OK?”

* Santorum wants to defile the U.S. practice of the separation of church and state

What Does “Santorum” Mean?

If you perform an Internet search on Rick Santorum’s last name, you get a surprising definition. A fitting definition, true enough, and one that amuses educated people while appalling republitards.

But the name “Santorum” shouldn’t just be conflated with lube and fecal matter; instead, think of his name as meaning something like “The American Al Qaeda is Here!” or “GOP Anti-Americanism Rules!” or “Watch Out for GOP Douchebags!” or “GOP Sharia Law Now!” or the like.

Americans Get What They Deserve

When running campaigns in gerrymandered districts and moron-majority states, Santorum and other Republicans can openly court their base of racists and Christian cult members. But in a nationwide contest, they not only have to appeal to the racists and religiosity freaks but also gather in the entire Stupid Party of war mongers and greedwhores.

The GOP must somehow accomplish all that while not alarming too many voters who are sentient, kind and compassionate — which means Republicans can only be elected when decent people stay home.