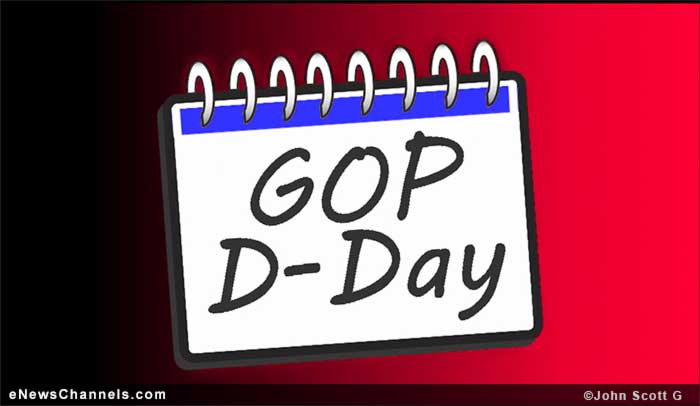 Walk a mile in someone else’s shoes, the proverb states. In other words, have some empathy. All righty then, I will try spending a day as a RWNJDB (rightwing nutjob douchebag) and see how it feels.

My alarm is a clock-radio. It blares every morning at the same time, seven days a week. The device is situated atop a bureau away from the bed, thus forcing me to actually get up to turn it off, an action that occurs remarkably soon after it breaks its daily twenty-three-hour-and-fifty-nine minute silence.

I say “remarkably soon” because of an old trick: the clock-radio is tuned to a station that broadcasts vacuous commentary and insipid pop music (Contemporary Hit Radio I believe they call it). This ensures that I will emerge from under the covers rapidly in order to silence it. Gotta get up to turn off that crap and get moving on my morning exercise routine.

NOTE: so far, this schedule reflects my own sensibilities and proclivities, but from this point forward I will attempt to do something so onerous, so vile, and so frightening that you will marvel at my courage and valor. As painful as it may be, I will endeavor to: Live One Day as a Conservative.

To accompany the pushups, sit-ups, and so forth, I put on some appropriately moronic music. Hank Williams, Jr., Kid Rock, Ted Nugent, etc. “Take that, people with taste!” I yell in between whisper-grunts of “one-two, one-two.”

Next, it’s on to breakfast where I thank sweet little baby Jesus that we are all able to consume food that is chock full of GMOs (genetically modified organisms) courtesy of Monsanto, DuPont, Syngenta, Dow, Land O’Lakes, and other corporate entities that put profits ahead of people’s lives. I offer up a prayer that one day soon we will all be able to chow down on meat, fruit, vegetables, bread, and dairy brought to market without any pesky health inspection nonsense. I know it can happen once we rightwingers get rid of intrusive government regulation of the food industry. “Eat up and take yer chances like a man!”

If an errand needs to be run and it’s nearby, I would normally take my bike, but the conservative view is “Screw the environment!” so today, I use the car even for a short trip. But no matter the mode of travel, streets are used. Yes, streets. You know, since we still have them. As a conservative-for-a-day, I once again give thanks to republicans for ensuring that our roadways and bridges are in such disrepair that they are literally crumbling. “Look out below ya damn liberal hippies!”

Next, it’s off to work where once again I thank God for helping republicans allow corporate entities to arbitrarily raise rates for electricity, water, gas, Internet connections, phones, mobile communications, and so much more. “Praise Jesus as we try removing regulations on these industries so they can cut service and raise rates even further!”

Speaking of jobs, hosannas are spoken aloud several times a day to the good people of Washington, DC who have enabled our fine upstanding multi-national corporations to send million of jobs offshore. “All of you (formerly) working Americans can drop dead — it’s your own damn fault for being born without trust funds!”

Praises are also sung to the conservative congressmen who so courageously accepted campaign contributions while allowing US-based corporations to evade paying their fair share of taxes. “Screw all of you citizens who were too stupid to not be corporations!”

Later in the morning, after a glance at the crazed and confused diatribes of World Net Daily and Drudge, it’s time to send out another prayer of thanks for the brave conservative pundits who disseminate fake stories that call for attacking the homeless, the poor, seniors, children, students, women, and veterans. “Up yours to everybody who is not me because I’ve got mine, ya commie pigs!”

Getting dizzy. Head spinning. Must be the GMOs in the food. And having so many malicious thoughts in my head is certainly causing oodles of brain cells to dissolve into dust.

Feeling exhausted! There are so many bits of logic and decency that must be ignored in order to be a conservative. “We must cut taxes on the rich” we shout, just after yelling “The country can’t afford funds for education, seniors, healthcare, veterans, and infrastructure.”

And let us not forget the racism, homophobia, and religiosity. “Fuck the Muslims, niggers, atheists, fags, and Jews!” I scream. “Go Rand Paul!” I shout. Having blurted out the hate speech at the top of my lungs I nervously check to see if the window is shut so nobody hears me because they might not understand the concept of pretending to be an asshole for a day.

Oh Sweet Lord Baby Jesus, Slayer Of Our Enemies, we sing the praises of our brave republicans who defeated an infrastructure jobs bill, blocked a veterans bill, blocked an increase in the minimum wage, blocked the paycheck fairness act, blocked unemployment benefits, and prevented millions of uninsured people from receiving healthcare. Amen.

Conservatives have a completely different world-view from respectable people and to maintain your perfidy you have to keep yourself in a constant simmering stew of rage and paranoia. You have to succumb to the continual stream of phony stories, many of which contradict each other.

Plus, a dispiriting feeling often smacks you upside the head and inside the heart. Several times each hour it occurred to me that a terrorist aiming to destroy democracy does the same kind of harm as the conservative conspirators in the three main sects of traitors: the GOP, the Tea Baggers, and the Libertarians.

And yet, I have a confession to make: it sometimes seems quite liberating to undermine the basic tenets of the United States of America. “Oooooooh, it feels so rebellious!”

Was it possible my mind was atrophying into a conservative point of view? Was the syphilitic monster that is conservatism eating away at my very core?

Yes! The change has come! I totally get the attraction of being without a moral compass. Wow, once you cast aside all vestiges of civility, it’s easy and fun to be a rightwing nutjob douchebag (RWNJDB).

Spend a day in rightwingnut world and you’ll see three big reasons why being a conservative is so very attractive to some people. (1) You can openly hate women, children, veterans, minorities, teachers, scientists — in fact, you will be free to mock every decent human being on the planet. (2) You can attempt to force your religious cult beliefs on everyone while screeching about the Constitution (which ironically prohibits the conflation of church and state). And most importantly, (3) you never have to let an original thought enter your, uh, whatchamacallit, that thing inside your noggin, um… brain! Yeah, that’s it.