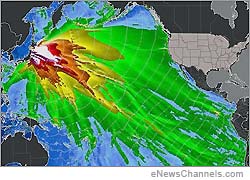 eNewsChannels COLUMN: Since love is the greatest force on Earth, here is a Tsunami of Love Prayer by Indigenous Elders that can phenomenally neutralize the destruction of the “500 mph wave in open seas from their biggest earthquake in history,” reported CNN. The tsunami not only is having devastating effects on millions of people and property, but Elders say the waves cause destruction of Marine life, from our fish, whales and dolphins all the way down to the bottom of the ocean. And right now there is unparalleled seismic activity, a shaking of Mother Earth, verifiable by seismic data centers, which is affecting all life on Earth.

Since we are aware of the laws of cause and effect, a gifted Native female Earth Healer who was warned about the Japanese disaster three days ago, told me that this catastrophe is a wake up call to help heal the shared evil or negative karma that humanity has done on Mother Earth throughout history. Whether or not you are in harm’s way, here is what you can do to help protect all life on Earth:

The Earth Healer says we can do phenomenal good right now with a simple, powerful prayer from the heart to transmute or transform ALL those dark deeds from the cellular and atomic levels of all life forms on Mother Earth, to the light with love. And then request that it be balanced and harmonized with the law of Dominating Good: That God is good, God is in all things and is in charge. And give thanks to Creator.

We also need to prevent the causes: The Elders warn that we cannot keep taking the oil out of Mother Earth without this kind of effects, since the oil, which the tribes call “Her blood,” is necessary to lubricate the tectonic plates, including under the sea, to prevent more earthquakes. The Gulf oil spill was another horrific lesson of the effects of using oil for energy, instead of renewables, added to Japan’s toxic oil refinery explosion and massive on going fires just depicted on CNN.

CNN also reported that despite Japan having the highest nuclear safety standards, including in case of earthquakes, it necessitated Secretary Clinton sending military planes bringing coolants to prevent meltdowns, like Chernobyl, of two of Japan’s nuclear reactors whose quake and fires destroyed their command centrals and two backup cooling systems, including electricity.

Researchers in 11 countries and a Nobel Prize winner in the YouTube video, “Water: The Great Mystery,” found that radiation is the greatest threat to water and since we are mainly water, humanity. They found it blocks our drive to survive. That is why the Elders say it is against the Laws of Nature and the Universe, and why Pope Benedict said in 2008, “It is a sin to poison the water,”

The Indigenous Elders, Union of Concerned Scientists and the 5 Nobel Prize winners agree that to live in more integrity and harmony with Mother Earth, as Earth Guardians, we must shift to clean renewable energy, which has now become as cheap as dirty high risk energy. “Wind Energy now costs One Cent per Kilowatt hour,” according to the President of the Institute of Energy, Dr. Arjun Makhijani. His studies found that “The US could have low-carbon energy without nuclear power, and that wind and solar energy would be cheaper and safer than nuclear since there is no risk of catastrophic downside and phenomenal cleanup costs.”

We can NOW create good collective karma by together ensuring that our leaders finally learn from these lessons and shift budgets to renewable energy to prevent these catastrophes. In so doing we are creating, with the grace of God, a joyful harmonious New Earth.

Article is Copr. © Suzy Chaffee. All rights reserved. Opinions expressed by author do not necessarily reflect opinions or position of this magazine on any topic presented.