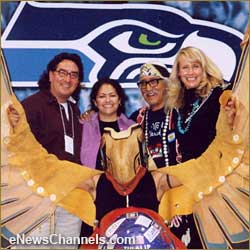 Ski Legends like Billy Kidd, as well as this weekend, Donna Weinbrecht at the Boston Expo, and Wayne Wong at Sacramento, are honoring the tribes and getting the word out that underserved American Indian kids are warmly welcomed, along with all youth, to participate in the virtually free ski and snowboard “Passport” programs for kids between 4-7 grades. There are also special “Learn a SnowSport” Programs in most snow states.

SNOWDANCE OFFERING
In appreciation for this outreach and Seattle Show producer Dan Schendler honoring Gene Tagaban (Tlingit-Cherokee) on behalf of the tribes, Gene is performing the stunning “Ravendance” he did for the Dalai Lama, to open the Seattle Ski Show at 1PM Friday, at the Washington State Convention Center.

“My Ravendance is an honoring of Spirit and acknowlegement of gifts we receive from Nature: The water, air, wind and snow. Mother Nature, like people, responds generously to appreciation,” says Tagaban, a founding member of the Native American Snowboard Team.

HAIL TO THE REAL PIONEERS OF SKIING!
The Apache and Dine/Navajo who came over the Bering Straight are related to the Chinese-Mongolian ski pioneers in the Four Corners of Asia. Skiing helped them chase down big game in the mountains to survive, according to Spokane-based Nils Larsen’s documentary, “Skiing in the Shadow of Genghis Khan,” which was honored at Mammoth’s 2009 World Ski Congress. These founding cousins have the same linguistics and ceremonies and can understand each other.

Wong, the Chinese “Forefather of Freestyle Skiing” said, “Wow,” when I told him his ancestors were ski pioneers, for which he will also be honored by Ski Dazzle owner Judy Grey, at Sacramento. The matching DNA markers also unknowingly inspired the Apaches to start two ski areas in our Four Corners.

In appreciation for the tribal Elders saving ski areas from (priceless) droughts since Vail, in desperation, asked the Utes to do the first snowdance in 1963, the ski areas having been inviting nearby tribal youth to ski and snowboard. These winter sports ops are doing wonders to turn around Indian youth having twice the obesity, diabetes, school dropout, and suicide rates of any race, but the recession has reduced these ops.

Because only one Native has competed in the Olympics in this Millennium, and only one girl ever, Billy Kidd (Vt Abenaki), of the Native American Olympic Team Foundation (NAOTF), has put three talented Natives under his wing at Steamboat’s WinterSports Club. Six yr old Delaney Tyon, a Lakota-Sioux from Pine Ridge, the poorest rez in America, then won the 2008 National Nastar Ski Championships. 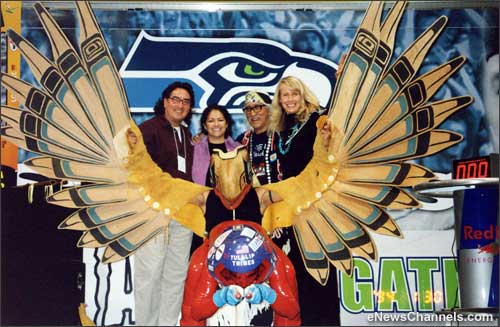 PHOTO (above): “Ravendancer” Gene Tagaban (Tlingit-Cherokee) will open Seattle’s Ski Fever Show on Friday, November 20 at 1PM, at the Washington State Convention Center in appreciation for US tribes being honored for pioneering skiing, this outreach to kids, and in gratitude for Nature’s snowblessings. (R) Olympian Suzy Chaffee and Speed skier Stew Young (Tulalip in tuck), and the tribes welcome all to join in celebrating Nature’s gifts. (photo courtesy of Seattle Ski Show).

Passport programs usually gives two kids in the designated grades free skiing or boarding tickets, along with discounted rental coupons, if one responsible adult buys a ticket. The website of each state’s ski resorts/areas association, which brilliantly runs it to create generations of new skiers, has more details. They sometimes have catchty names like I SKI NY. There is a minimal charge for Passport applications and booklets that allow you to explore many wonderful ski areas.

Because it is rare that many Native adults have been able to afford to learn to ski or snowboard, I encourage Indian kids to search for a relative, teacher, or adult friend (of any culture), who needs to have fun too, to take them, or vice verse. Lift tickets are often discounted early and late season. Tribal teachers say, “Our kids live to snowboard and ski.” A smiling 4yr old took my hand at a pow wow and asked, “When can we go skiing again, Suzy?”

AFFORDABLE “LEARN TO SNOWSPORT MONTH” (JANUARY)
Everyone is invited to come out and play in January’s “Learn a SnowSport Month” (LSSM) where resorts offer total learning packages of around: $20. to X-C, $30. to ski, and $40. to snowboard on LearnASnowSport .org. SkiWashtington .com and SkiOregon.org have a 3 X Learn to Ski Package for $99.”

Plus check out your local areas and state ski resorts associations for other Special Discounts. “www.californiasnow .com includes all their resort websites, so it is one stop deal shopping,” said director Bob Roberts.

Compassion is in Fashion in the Ski Industry!

For more info or donations to be able to continue this vital ski bridge between the cultures see WWW.SNOW-RIDERS.ORG.