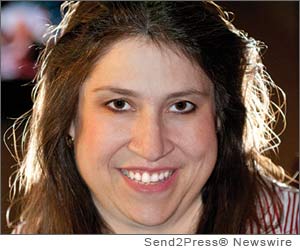 LOS ANGELES, Calif. (SEND2PRESS NEWSWIRE) — Countering the rapid turnover of 21st century radio personalities, a four-year on-air run is a milestone, especially when it keeps on running. Veteran radio host and personality Sheena Metal recently celebrated her 1,000th broadcast by interviewing LA Talk Radio station owner/founder Sam Hasson. The celebration was a ramp-up to the anniversary of her daily program “The Sheena Metal Experience” which turned four on January 7th. The show is one of the station’s top-rated programs.

“We are delighted to be celebrating Sheena’s four-year-anniversary with LA Talk Radio,” says Hasson. “Since she launched her daily radio show ‘The Sheena Metal Experience’ in January 2009, Sheena has grown tremendously in every way and built a respectable audience that is loyal and devoted. We anticipate more great entertainment and intriguing guests in the coming year. LA Talk Radio is proud to call Sheena Metal one of our own.”

The admiration is returned by listeners and guests. More than 1,350 different guests have contributed to the addictive landscape of “The Sheena Metal Experience” including Margaret Cho, Howard Jones, Marc Colombo, Stacy Keach, Barbara Eden, Carol Channing, and Joanna Angel.

Metal kicked off her 18-year radio career by lighting up the Los Angeles towers on KIEV 870 AM, co-hosted by actor/musician Robbie Rist of “The Brady Bunch.” The show became “Sheena Metal After Midnight” on the FM dial. Later, she co-hosted with Nastyman on KLSX, where the shock jock dubbed her “The Queen of Observation.” Next came a stint on CBS anchoring evenings on the then-Howard Stern affiliate, 97.1 The FM Talk Station (KLSX).

“This has been a dream come true for me,” comments Metal. “The Sheena Metal Experience is the show I’ve always wanted to do and I’m thrilled with its success. It’s amazing to work with a radio visionary like Sam Hasson at LA Talk Radio. I couldn’t ask for better guests and I love my listeners.”

Metal’s impact on the talk radio world has been referenced in many periodicals including the Los Angeles Times. She was included in the talk radio expose “Sounds in the Dark,” the book by Michael C. Keith, with a forward by radio legend Larry King.