COLUMN: Native Americans can take pride that Tennis icon Billie Jean King, a Cherokee, and Ted Kennedy, descendant of an honorary Iroquois Chief, did wonders to create equal opportunities for girls/women in sports and education in America and abroad. By enforcing the 1972 Title 1X Education Amendments Act, they actually helped restore those equitable traditional ways of the First Americans, which were interrupted in the last 150 years.

We all have Indigenous ancestors. And according to a tapestry of ancient oral traditions, “Native American moms, and other Indigenous females, have been “sports role models for their children since Pre-Atlantean times.” It was part of their balanced body, mind and spirit tribal family philosophy.

Sports also got American Indian women in shape to defend themselves, like whooping General Custer, who first attacked them and their children as easy marks, before limping on to the fateful Little Big Horn field, revealed forensic scientists. Sports and education also gave tribal women powers to heal and preserve what is good: Polly Cooper (Oneida) is honored in a sculpture at DC’s Smithsonian National Museum of the American Indian with General Washingtion for saving his troops from freezing and starving to death at Valley Forge. Mariah Cooper, one of our XC Native American Olympic Hopefuls, is a direct descendant.

In education, Iroquois Clan mothers have for centuries been teaching, training, choosing, and if necessary removing their chiefs, which resulted in earth’s shining model of egalitarian democracy. They are revered by their resulting well-balanced men for this. Ben Franklin copied parts of their democratic formula, but since mainstream women were left out of it, the Seneca Clan mothers graciously adopted Susan B. Anthony and others, who became the Suffragettes.

The legal team of the WomenSports Foundation, founded by Billie Jean, with Olympic Gold medal swimmer Donna De Varona as President, pricelessly helped restore those tools of dignified humane equality by providing the legal muscle behind Title 1X enforcement. Since the mid 70’s, it has benefited girls in all federally funded schools, including reservations. Plus Donna got the critical message out as a pioneer ABC Sports commentator. 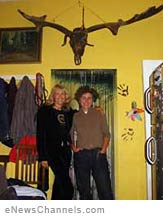 I learned about the Kennedy tribal connection as a result of being a guest of author Lord Moyne Guinness, after Athens in 2002, thanks to his late wife Shoe, who wanted him to collaborate with our foundation on a “Healing of the Continents” in Dublin, starting with Native Americans, whom they love for also saving them in potato famine. His niece, Marina Guinness, a history buff, amazed me first by sharing that “our family is the most ancient DNA tribe of Ireland, the Pre-Celtic Milesians, and our name means God of Love.”

Thanks to getting to know the Kennedy kids who summered down the road from her, she then shared their 18th Century tribal ties, in giving me the book, Citizen Lord: The Life of Edward Fitzgerald, Irish Revolutionary by Stella Tillyard. It told how this charming witty man of the people was made an honorary chief by the Iroquois for his many good deeds. That would make Ted’s mom, Rose Fitzgerald Kennedy, and her tribe, Chief Fitzgerald’s descendants.

“Seems that these traits, also a forte of our tribes, run in the Fitzgerald/Kennedy genes,” I told Marina, after mentioning Ted’s Title 1X leadership. Plus how he was inspired by the sporty women in his family, especially sister Eunice, founder of the Special Olympics.

Not realizing this tribal connection, environmentalist Bobby Kennedy Sr. had coincidentally said after visiting Wounded knee, “I wish I was born a Native American.” His son Bobby Jr, then became a tribal supporter and the greatest guardian, next to the 500+ Indian Nations, of America’s waterways through his “RiverKeepers” network. The Iroquois prophesy warns humanity that our sacred water could one day be priceless.

Also unaware, JFK wrote an introduction to Terry White’s The American Indian, which brought me to tears since we could also have prevented our eco crisis if, like the moon landing, we also focused on this final sentiment:

“Before we can set out on the road to success, we have to know where we are going, and before we can know that we must determine where we have been in the past. It seems a basic requirement to study the history of the Indian people America has much to learn about the heritage of our American Indians. And only through this study can we as a nation do what must be done if our treatment of the American Indian is not to be marked down for all time as a national disgrace.”

My Olympic mother Stevia, who told me I could do anything I put my mind to, introduced me to JFK at his Rutland, Vermont campaign ralley, as “Our next President.”

HAIL TO PE TEACHERS OF AMERICA

Speaking of vital education, I also honor the PE Teachers of America, headed by Carol Oglesby for asking me to lead the Title 1X March in DC, out of concern that girls/women still having 1% of the total athletic budgets three years after Title 1X became law in 1972. That 1% translated into my not being able to get a ski scholarship in 1964 at Denver University, and needing to hitchhike 30 miles to get the on-snow training promised me there, because I couldn’t pass the “male equipment” physical for NCAA Insurance. So I happily took the Title !X torch.

So in 1975, mom joined me in marching, along with over a hundred others with high hopes, down Pennsylvania Avenue. The televised march gave me the chutzpah to call Vice President Mondale, a jock, who seemed glad to set up the White House meeting for Billie, Donna, Carol and their lawyers to finally get the law enforced.

God also bless Senator Birch Bayh, author of the visionary Title 1X, (as well as the Equal Rights Amendment Bills, and President and First Lady Obama for finally getting Equal Pay for Equal Work passed in 2009.) Bayh had wisely suggested that I also get his fellow skier, Ted Kennedy, chairman of the Senate Health Committee, behind it. Totally agreeing that, “The right to sport is the right to health, and girls/moms are key to getting the whole family healthy,” Kennedy heroicly put Title 1X under his wing for 35 years, ensuring it survived two attacks by the Supreme Court. 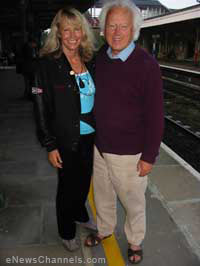 While serving on President Regan’s and then George Bush’s Fitness Councils, I cleared up some misinformation that Bush was harboring about Title 1X, and he surprisingly apologized, and went to bat for women. Together this visionary tribe has since the mid 70’s saved Americans over a trillion in healthcare and welfare, given the Surgeon General found that sports delay teen pregnancy.

Our Dream Team has been empowering generations of stunning girls/women/moms, who also get their kids, like Michael Phelps, to the Olympics. Today’s girls need to know how we fought for them, and they need to tell their daughters to keep enlightening and pushing their leaders, ideally while sharing bonding sports. Ted and a few other Kennedy’s I raced against at their family reunions in Aspen could have been Olympic contenders, proven by Ted Jr, a Paralympic record holder! Thank God most chose to heroically serve humanity. That is why Senator Ted’s honoring my Title 1X service during his ‘Kennedy kids only’ luncheon in the mid 80’s, was higher than an Olympic high.

MUST KEEP ON PUSHING

With women having a total of 1/3 of the total athletic budgets – programs and scholarships – which mainly (74%) goes toward handfulls of male football and basetball players, females need to keep pushing. So say women leaders of Sweden, of my heritage, who enjoy the most equality in sports and education, resulting in Earth’s most advanced, peaceful, society, which gives out Nobel Prizes.

Given that the first 100 U.S. women in business and politics, like Gloria Steinem, were tomboys athletes/dancers in their youth, a more equitable distribution of athletic funds to minor sports would further cut billions in America’s healthcare costs by giving millions of more boys and girls opportunities in minor sports. Plus it could empower them, like the Kennedy’s, to better protect Nature’s magnificent playgrounds and our way of life.

With only one Native American woman ever in the Modern Olympics, assisting underserved Native youth, especially girls, go for their Olympic Dreams, could do the most to restore their vibrant health, spirit and productivity. It could prevent their health epidemics, like obesity and diabetes, which are twice those of any other race, so they could better show us how to live in more harmony with Nature. Billie Jean wants to give clinics.

By going back to green, all natural “Earth, Human and Snow Friendly”products,” everyone can make a huge difference in preserving our Nature Kingdoms (life supports) and weather. That is what the North American Elders advised our National Forest Service leaders, who are supposed to be America’s Guardians of Nature, corroborated by California scientists.

These solutions are good ways to show appreciation to the tribes for their immense gifts, which mainstream Americans, led by the skiers and ski areas thanks to their snowdances, are beginning to remember. In so doing future generations may continue to make every day, “A good day to live.” (coined by a Cherokee woman Chief). Wouldn’t that make JFK, Bobby, Ted, Shoe and the Tribal Ancestors smile?

The Native American Olympic Team Foundation (NAOTF) is a cross-cultural 501(c)3, whose mission is to “create joyful unity through sports and education, to help heal Mother Earth for all our children, including through the Olympics.”

Photo Caption (first photo above): Olympian Suzy “Chapstick” Chaffee, learning from Dublin’s Marina Guinness that their Kennedy friends, are related to an honorary Iroquois Chief, after meeting with Lord Moyne Guinness, as a dying wish by his wife. Photo courtesy Guiness Family.