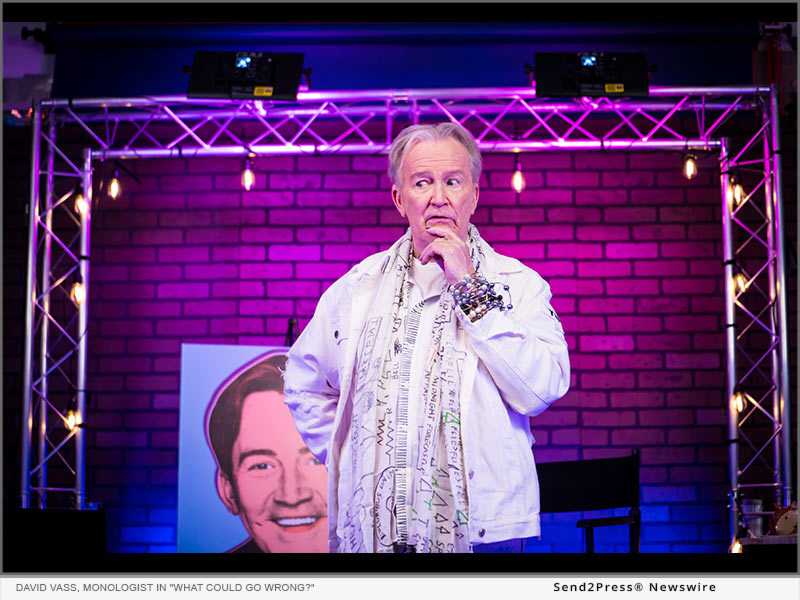 (INDIANAPOLIS, Ind.) — NEWS: 71-year-old gay elder David Vass, who participated in the birthing of the gay liberation movement from seedlings, performs his long-awaited one-man show, “What Could Go Wrong?” – a series of monologues based on over 70 diaries kept since Vass was seven years old, at IndyFringe.

A minimalist set reflects the intimate ambiance for his brutally honest, dramatic, funny, disturbing and at times cringe-worthy series of monologues culled from the diaries that he has kept for over 60 years, creating the bones of this extraordinary ‘evening with’, slightly condensed performance.

His one-man show, just prior to the onset of the pandemic, traveled to New York City, London, San Francisco and Australia. As the realities of the travel restrictions because of COVID were realized, David used that two-year period to rewrite the live version material and create the movie script. He also redesigned the play website, created his YouTube Television Channel, and legalized the production company (‘I’m Afraid Knot LLC’) into a non-profit 501(c) organization.

Fervently believing, given the content and candid honesty of this adults-only production, that “audience members should feel free to walk out, no offense taken by me,” he also reminds the audiences of seeing the performances remembering his strong belief that our collective freedom of speech is under attack during these ‘woke’ times. This first half of his life can be brutal and repugnant, as life can be. There are performances where the coarse language used can come under attack, which he brushes off with “this is how white trash talked in those days.”

For a flavor of the content and intensity of the production, he suggests having a free look at the four-minute sizzle/teaser reel found on the play’s website: https://www.whatcouldgowrong-theplay.com/.

David says, “My young brothers and sisters, Cis or Gay or however you identify from the current 14-pronoun, one adjective non-binary tribe of which I am a member, you’ve been handed rights, gay and straight and a large degree of equality and variety on a silver platter this past decade, and off the backs of us elders who remember how we got from the early 50’s to now. With RvW overturned (making way for gay marriage and other human rights to be overturned as well), get ready to put your/our bodies on the streets again, blocking the streets again, making noise on the streets again and taking over the streets again.”

He recalls at seven years of age (1957 and the year he outed himself) being asked if he was a ‘butch or a fem’, a few years later a ‘top or a bottom’, skip forward to ‘are you bi’. These questions all asked in the 50’s and with no resources for Vass to reference – he didn’t know any of those words. He learned at 14 what fellatio meant when a uniformed policeman pulled him into an alley and demanded just that. His first sexual encounter was not warm and fuzzy but makes for a sad but fascinating monologue segment about that time in gay history when the police and the Mafia pulled the strings on what the gay tribe could or could not do, and the prices paid for that suppression.

Vass reflects, “This history, this collection of real stories needs to be told, to be kept alive in the first-person for generations of our tribe who follow. Please be clear, this is not a gay play, it is a series of experiences told in monologues with the details refreshed by my beloved diaries – a series of encounters and life-changing events I have lived. Yes, I happen to be gay, and I use this theatrical forum to tell the absolute truth as I know it, and it is from a gay perspective. How could it not be? This was all seen through my eyes. I believe the monologues are relatable to everyone, and this condensed ‘evening with’ also features stories about my time working with strippers, Broadway stars, movie legends, Grammy winning singers, assorted celebrities and so much more. We are all humans first, and then members of whatever ‘tribe’ we resonate to.”

The performances are the last three weekends of August and the Labor Day weekend, in Indianapolis, with the specific dates and times available, and also ticket sales on the IndyFringe website https://indyfringe.org/.

Vass asks the Indianapolis / Indiana community to support local artists and see his show by purchasing tickets now and reading additional information about IndyFringe on their website.

Snippets of what some others (reviewers, bloggists, interviewers, audience members) have to say about ‘What Could Go Wrong?’…

Hugh M. Langford, Cultural and Theatre Critic-At-Large, London Review: “One story was considered by some attendees to be so offensive they walked out (4 to be exact). He is not pornographic or rude, but he is unabashedly rough, blue, and unafraid to present adult material without the ribbon and bow. At last, a show for grown-ups – imagine! A hero’s medal to David Vass, diarist and storyteller, for wringing humanity out of part one of his life and sharing it with us without a hint of embarrassment or shame. His is a skilled and fully realized performance. If you can find this show, see it. You may not like it but see it.” (2021)

Joshua Ringwald, Lifestyle Blog Cultural Writer, NYC Review: “I was mesmerized throughout – at times shocked, embarrassed, angry, doubtful – is this for real, is this a play in disguise, am I watching a brilliant actor or one of the most honest and adept liars I’ve ever listened to? And laughter, so much laughter, and a dose of weeping too. Currently he self-produces, which he can ill afford. Calling all agents, bookers and producers; this is a gold mine in waiting. This needs to be seen by a lot of people. This is worthy of a long Off-Broadway run! See it. A brilliant evening – honest!”

Rita Kohn, Arts Writer, Nuvo, Indianapolis Review: “We cry, laugh, sigh, smile, cheer, groan – we come away uplifted by your honesty, lifeforce. Story is at the center and we love a good story. David Vass imbues the ‘epitome of urbane,’ which he brushes off with an airwave. One of my favorite monologues is him literally pooping himself at Lincoln Center having Montezuma’s revenge during a concert doing sound and lights for a two-time Grammy winner. It’s all in this show. Really it is not a play so much as an ‘evening with’, in the tradition of Quintin Crisp, David Sedaris and Augusten Burroughs – all cringe memoirists.”

Audience Member After Performance in San Francisco: “Oh my God, I hope he has a good lawyer because I can’t believe what came out of his mouth about those celebrities he worked with!”

The “What Could Go Wrong?” website – https://www.whatcouldgowrong-theplay.com/ – bio information, the history of the stage production and links to watch a full-length PPV movie version of the play, filmed in June of this year.