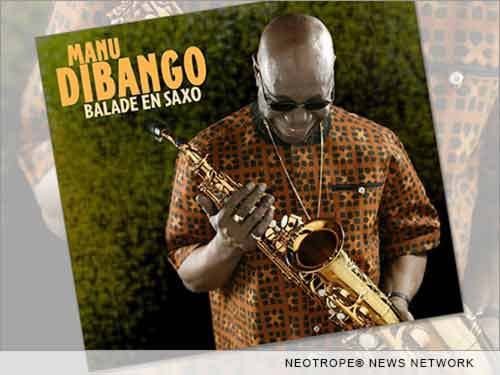 WASHINGTON, D.C. /eNewsChannels/ — NEWS: The Oracle Group International debuts its Publishing Division with the acquisition of the memoir of Cameroonian born international jazz legend Manu Dibango to be released on December 1, 2015. To support the publication of this endeavor, Manu Dibango will embark on a U.S. Tour scheduled to coincide with the release of this book.

He will participate in a series of “An Evening with Manu Dibango” events in New York, Washington D.C. and Chicago, Ill., during the period from November 2015 to December 2015.

“The Oracle Group International is excited to expand into the realm of book publishing, and what an honor it is to begin this journey with a world renowned jazz pioneer and trailblazer as the great Manu Dibango,” says CEO Mocha Ochoa Nana. “We are applying our proven expertise in the field of marketing and public relations to service a unique group of authors, linking them with audiences around the world.”

Coming from a protestant environment, Manu Dibango came to France to continue his studies with only 3 kilos of coffee to pay for his education. As a student at the beginning of the 1950’s, he discovers jazz music and learns to play the piano. While he is preparing for the French Baccalaureate, he developed an affinity with the saxophone and as a result, began to produce himself in “clubs.”

A long musical trip will take him to Belgium and principally in the Tabou of Brussels. This book depicts the self-portrait of a musician, whose talent finally forces him to move in a life changing direction that he calls “luck.” However, the life changing process for this artist remains a permanent paradox. In Africa, toward which he continues to devote himself, he was never recognized for what he’s worth; in France he remains an African first, before being recognized as a musician of African descent; yet, in the rest of the world he’s seen and accepted as a star musician and performer.

In this book, the patriarch takes an introspective look at his achievements as a pioneer in the Afro Jazz genre and recalls those individuals who were instrumental in shaping his career, as well as those unplanned and unexpected places where his amazing and innovative talent opened doors for him. Beyond his story, Africa, France, and America are written about with an unreserved passion.

The Oracle Group International is a globally recognized literary public relations and marketing agency that specializes in producing events that promote literacy. Our primary focus is to connect authors with events that engage and uplift the local, national and global community.

Bernadette Jeudy to Read from Her Debut Memoir 'Tested Innocence' at Embassy of Haiti in DC Oct 3, 2019