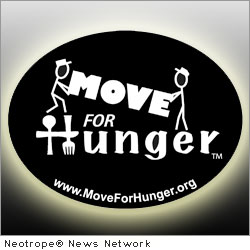 NEPTUNE, N.J. /eNewsChannels/ — Move For Hunger, a non-profit that works with moving companies to collect food for local food banks, is nominated as one of just five finalists for the American Giving Awards presented by Chase, putting the charity in the running for a $1,000,000 grant. The American Giving Awards allows fans of Chase to choose which organizations receive funding through the Chase Community Giving platform on Facebook.

The presentation of the American Giving Awards grants will air on NBC on December 10, 2011 and will be hosted by 22-time Emmy Award Winner Bob Costas.

Voting for the awards runs from Dec. 1 through Dec. 8, 2011 and directly determines the size of the grant each charity will receive. Fans of Move For Hunger can vote for the charity by visiting – http://facebook.com/ChaseCommunityGiving – and clicking the “American Giving Awards” link in the left side of the screen. Then clicking the “Vote” button under the “Move For Hunger” section.

“This is the biggest thing that has ever happened for Move For Hunger,” says Adam Lowy, executive director of Move For Hunger. “To receive national recognition on this scale is truly amazing for an organization as young as ours. The money will go a long way towards expanding our network of movers to reach our goal of delivering one million pounds a year to our nation’s food banks.”

About Move For Hunger:

Move For Hunger is a 501(c)3 non-profit organization that works with moving companies across the country to pick up unwanted, unopened food from those who are relocating and deliver it to local food banks across the country. To date, Move For Hunger is working with over 200 movers in 37 states and has collected more than 365,000 pounds of food. With the support of its partners, Move For Hunger is turning the average food drive into one of the nation’s largest, year-round service programs. For more information or to find out how you can help support Move For Hunger, visit http://www.MoveForHunger.org and make an online donation to help our hunger relief efforts.

As the Cost of Food Soars, North American Van Lines and Move For Hunger Renew their Partnership in 2022 to Provide Hunger Relief Jun 13, 2022