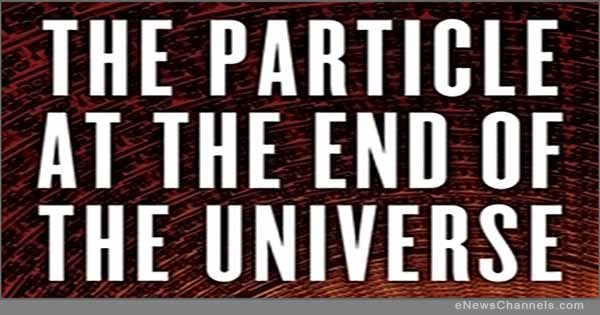 BOOK REVIEW: As science reveals more about our place in the universe, sentient beings are ecstatic about Sean Carroll’s “The Particle at the End of the Universe” and its view of what might be called the blueprints of reality.

I am about to write a review of a book which I do not fully comprehend. Sure, we all did that when we were in school. Like you, my book report on “Romeo and Juliet” was based on the movie. But here I am doing it again as an adult (chronologically) of moderate intelligence (all things being relative) and so I hereby apologize in advance for everything that’s incorrect in this screed except the opinions, for which no apology is possible (or given). 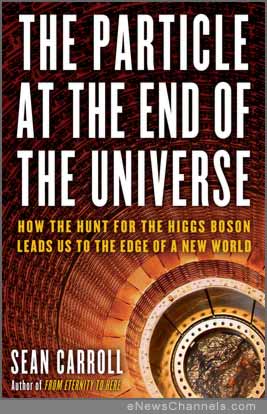 Fortunately, author Sean Carroll is so enthusiastic about science that his upbeat attitude is infectious. He makes you want to continue reading even when everything in your brain is saying WhoaI’mNotGettingAllOfThis! Perhaps the author and publisher will consider offering a simplified version of the book in the same manner as Nate Silver’s excellent “The Signal and the Noise,” which is called “The Signal and the Noise…in 30 minutes.” (So allow me to suggest a title for Carroll’s work: “The Particle at the End of the Universe…in 1.8e+12 nanoseconds.” No need to thank me.)

First, some historical perspective. (Yup, it’s not just science, math and physics; history is also involved with Carroll’s book — are you still reading this review?) Just for a moment, we need to go all the way back to about 400 years B.C. “Democritus, a Greek philosopher who predated Aristotle, originally suggested that everything we know is made of certain tiny indivisible pieces, which he called ‘Atoms.'” Which was the right basic idea even if atoms turned out not to be indivisible — an atom has a nucleus that is made of protons and neutrons with orbiting electrons. And those protons and electrons are also not indivisible since they are made up of one of two kinds of quarks: up quarks and down quarks.

Okay, you’ve got your atoms, protons, electrons, up quarks and down quarks, so we’re all set now, right? Nope, ’cause there are also gluons, photons, gravitons, fermions, leptons, neutrinos, other types of quarks (top, charm, bottom, and strange), and, of course, bosons. Plus:

There are actually twelve different kinds of matter particles: six quarks that interact strongly and get confined inside larger collections like protons and neutrons, and six ‘leptons’ that can travel individually through space. We also have force-carrying particles that hold them together in the different combinations we see.

You can see why reading this book is a bit of a chore for us regular folk but fortunately, Carroll uses lots of nifty-keen analogies and stories. At various points, he enlists the help of the following: Where’s Waldo; Bruce Willis and Milla Jovovich from the Luc Besson film, “The Fifth Element;” and Violent J and Shaggy 2 Dope (who we all know and love as recording artists Insane Clown Posse) with their wonderful ode to magnets, “Miracles.”

But then we have to consider particle physics (Aww, do we have to? I hear you ask. Yes, and stop your whining.)

The 1970s saw the finishing touches put on our best theory of particle physics, which goes by the fantastically uninspiring name of the “Standard Model.” It’s the Standard Model that describes quarks, gluons, neutrinos, and all the other elementary particles you may have heard of.

The Standard Model explains almost everything: “Quarks, neutrinos, and photons; heat, light, and radioactivity; tables, elevators, and airplanes; televisions, computer, and cell phones; bacteria, elephants, and people; asteroids, planets, and stars — all simply applications of the Standard Model in different circumstances. It’s the full theory of immediately discernible reality,” as long as there is a Higgs boson. Which leads to some pretty impressive scientific sleuthing. However:

So the always-questioning scientists poked and prodded and explored and theorized and came to realize that nothing in reality is real. Wait, that’s not quite right. But look, when we describe that desk over there as being solid, it is actually a series of fields that appear to us as a desk.

Everything is really fields in space with vibrating thingys in them, one of which is the Higgs, which, as it turns out, allows all the other thingys to combine and form stuff. (Sorry to get so technical but hey, that’s science.)

Where Are We Heading Here?

All right, if the main point was the search for the Higgs boson, then we’re drifting a bit. What is the Higgs, anyway, and why should we care about it? Well, we couldn’t have our world without the Higgs. Oh, we’d still be here but we wouldn’t look like us, nor would the world look as wonderful and varied.

The whole idea of the Higgs boson is difficult to grasp if you don’t think about the world in terms of those damn fields. Not amber waves of grain fields, but “substances spread through all of space that we notice through their vibrations, which appear to us as particles.” For, you see, there are no particles in the world. You think of particles because of what you “see.” But you are not seeing things correctly. The fields are complex and form what we perceive as matter, and, and, and already I’m lost.

But, and this was a really really big but (no Kardashian jokes, please), the Higgs was just a theory and hadn’t been discovered. So the scientific community got together, raised nine billion dollars, built the Large Hadron Collider underneath a couple of countries in Europe, crashed a lot of protons together, analyzed the data and proved the existence of Dr. Peter Higgs, a scientist who appears to be made of particles just like you and me except he’s really just a series of fields that look like particles. Just like you and me. Must be nice to have something important named after you. It would make me jealous if I didn’t already have the G-spot. Sure, I’m poking fun, and I am truly ashamed of myself for doing so. No, really! But hey, my mind is not ready to handle a lot of these concepts. Consider:

The Higgs is a field that permeates space, giving heft to particles like electrons, allowing them to form atoms, which bind into molecules. Without the Higgs, there wouldn’t be atoms, there would just be a bunch of particles zooming separately through the universe.

Lurking in the universe, either Out There or right under you nose, there are unexplained entities such as dark matter and dark energy. There’s supersymmetry and superstring theory. There’s the intriguing idea of “compactification” of extra dimensions. And while that last one sounds like a new weight-loss program, the fact is that there are many more mysteries to be investigated in every corner of the universe and the Large Hadron Collider can help us achieve new insight and new knowledge. It’s a search for the ultimate laws of physics and not only is the search not over, it may never be competed. We keep finding answers that lead to more questions.

Carroll provides some insight into the type of person who enters into the quest for these answers:

Doing an analysis is not by any means the only duty of an experimentalist; there is also hardware work, taking “shifts” overseeing the experiment as it’s running, teaching (or taking) classes, giving talks, applying for grant money, and of course serving on committees and the thousand other bits of academic nonsense that are an inescapable part of university life. Occasionally the experimentalists are allowed to visit with their families or see the sun, but such frivolities are kept to a minimum.

Higgs is The Dog Particle

A word or two on popular media’s love of nicknames. The Higgs boson was unfortunately tagged with the moniker “supreme being subdivision.” Wait, that’s not right. I meant the “Almighty atom.” Wait, wrong on several counts. The “Ecclesiastical element.” Wrong again. The “Universal unit.” Nope. The “Unity unit.” No, and stop it! Oh, you know what I’m trying to say: the Dog Particle, if dog is spelled the other way ’round. Physicists hate that term and try to avoid using it, usually in a much more elegant manner than what’s going on here.

Is the Book for You?

It its attempt to explain the down-to-earth realities of this science of the unseen, the book is a magnificent failure, at least for poor dumb lil’ ol’ me, but the fact that Carroll came oh-so-very close to getting all this across is a triumph of infinitesimal proportions. And the writing is just plain fun. Here’s an example from page 101:

We often say, “A proton is made up of three quarks,” but that’s a bit sloppy. The two up quarks and one down quark that make a proton a proton are called the “valence quarks.” In addition to those valence quarks, quantum mechanics predicts that there are a large number of “virtual particles” constantly popping in and out of existence: gluons as well as quark-antiquark pairs. It’s the energy contained in these virtual particles that explains why protons are so much heavier than the valence quarks that give them their identity. It’s hard to give a precise count of how many virtual particles there are, as the number depends on how closely we look. (That’s quantum mechanics for you.)

Einstein’s paper on the photoelectric effect was the work for which he ultimately won the Nobel Prize. It was published in 1905, and Einstein had another paper in the very same issue of the journal where it appeared — his other paper was the one that formulated the special theory of relativity. That’s what it was like to be Einstein in 1905: You publish a groundbreaking paper that helps lay the foundations of quantum mechanics, and for which you later win the Nobel Prize, but it’s only the second-most important paper that you publish in that issue of the journal.

Reading Carroll’s book can often be baffling, but it can also be uplifting, making you feel in awe of the mind of human kind, leading you to feel reverence for whatever spirit or force set the universe in motion, and letting you appreciate the wonder of peeking at the ongoing events that are changing forever our ability to comprehend the miracle of existence.

VIDEO of Sean Carroll speech at the Royal Institution:

This article is Copr. © 2013 by John Scott G and originally appeared on eNewsChannels.com – all commercial and reprint rights reserved. Disclosure: No fee or other consideration was paid for composition of this un-biased review by the book’s author, publisher, or any other agency.