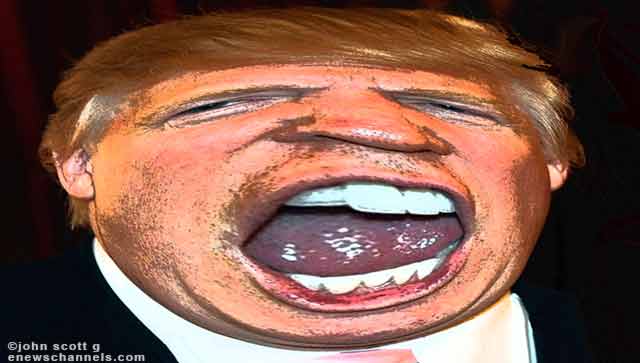 Ten leading contenders for the republican presidential nomination took part in a Fox Faux News Channel debate that provided a disturbing view of the turmoil within the party of stupid. Once again, we enlisted the help of two former GOP flacks to comment on the creepy statements of the rightwing nutjob clowns.

Inebriated and disheveled after playing a drinking game during the boring VP debate held earlier in the day, the two GOP operatives Wetpalms and Skunkbreath (not their real names) were now slumped in their chairs.

“Look at that parade of douche-nozzles,” Wetpalms said as the ten candidates were forced to endure an awkward line-up across the front of the stage. “Trump’s right — they’re all losers.”

Pouring themselves a couple more drinks, Wetpalms and Skunkbreath were still commiserating with each other about recently losing or quitting jobs with the RNC and the Koch brothers, respectively. “Goddam GOP hypocrites,” one said. “Goddam GOP scum suckers,” said the other.

“Thinking of changing party affiliation?” I asked them.

“No way!” they replied. “The rightwing nutjobs always pay more.”

“Plus, they always have way more hookers and blow.”

“I see,” I said. “Good to know you’re standing by your ideology and ideals.”

The debate itself got off to a nice start when Donald Trump refused to say he wouldn’t run as a third-party candidate if he did not get the treason party nomination.

“Sticks to his guns at least,” Skunkbreath said.

Rand Paul, senator from Kentucky, interrupted to shout something about Trump buying politicians.

“Aw shut up, Rand, ya little ponce,” Wetpalms barked back at the TV screen. “Everybody with money tries to buy politicians. Citizens United just makes it easier,” he added, referring to the Supreme Court decision that has unleashed a shipload of cash into the political process.

“And besides, Trump can now buy himself,” Skunkbreath pointed out. They both chortled and attempted a high five but missed. “Think I need another drinkie to get my aim back.”

Megyn Kelly, one of three Fox Fake News moderators for the debate, again went after Trump, attacking him for his foul comments about women. “You’ve called women you don’t like ‘fat pigs,’ ‘dogs,’ ‘slobs,’ and ‘disgusting animals’–” but Trump displayed a comic’s great timing by deftly interjecting, “Only Rosie O’Donnell.” The audience erupted in laughter.

“That’s tellin’ off that blonde bitch,” Wetpalms said. “Jesus Christ, look at her face. You could bounce a brick off of that expression.”

“Are we still doing the drinking deal-e-o?” Skunkbreath asked. “‘Cause that load of crap calls for another belt.”

Scott Walker, paid flunky of the billionaire Kochs and current governor of Wisconsin, tried to justify his disgusting views on controlling the reproductive rights of women. There was no reaction from the guys because they were not paying attention. That was my fault. I had put out some chips and ranch dressing and they were shoveling it down like hungry sharks swimming through a pod of seals.

Former Arkansas governor Mike Huckabee was also asked about how he would negate women’s reproductive choices. He recommended invoking the 5th and 14th Amendments to declare fertilized eggs “persons” so the GOP could then deny them the right to food, shelter, healthcare, and voting. Or something like that. (I confess to sipping a little of Wetpalms’ raspberry vodka as an antidote to the rethuglican distortions and lies, so I might be a bit hazy on the Huckster’s prevarications in this particular case.)

Rand Paul continued his descent into weirdness by suggesting we can defeat ISIS by not funding them and not arming them.

“We might have to do more than that,” Skunkbreath muttered ominously.

Ohio governor John Kasich was forced to justify his sane choice to accept Medicaid expansion in his state. The crowd in the Cleveland venue applauded because they have experienced the wisdom of this approach even if most conservatards in general want to cause as much pain and suffering as possible.

Former Florida governor Jeb Bush felt he could justify his support for immigrants to earn legal status by quickly blaming President Obama and adding some bromide about controlling the border.

Sure enough, Trump was next and he was his own belligerent self as he– Well, let the two GOP operatives tell it: “Gotta love this guy!” Skunkbreath gushed. “Look how he takes credit for bringing up the topic, blames reporters for distorting the issue, and fear-mongers about immigrants committing murder and spreading drugs.”

“Plus, he suggests he has some secret information about the Mexican government,” Wetpalms added. “What a guy!”

“Sounds like you want to work for him,” I said.

“Hell yeah,” said the other.

Meanwhile, John Kasich was extolling his fiduciary successes, all of which have so far remained unknown to everyone, but if there’s one thing conservatives know how to do, it’s lie convincingly. I brought this up to the GOP operatives.

“Yeah, well, the whole conservative schtick is built on lies,” Wetpalms told me, “so ya gotta be good at slinging the crapola if you’re gonna go Con instead of Pro.”

“Progressives have it so easy,” Skunkbreath said. “They can use actual facts that people can go look up and verify. Conservatives don’t get that advantage. That’s why people like us get jobs from the GOP.”

“I see,” I said sadly. Turning to the screen, I saw that Florida senator Marco Rubio was attempting to appear as if he belonged on stage with the adults. As usual, he was failing. But I might be prejudiced because I despise rightwing nutjob douchebag racists. It turned out that I wasn’t alone in my view of Rubio.

“Look at that little putz,” Wetpalms said. “It would be funny if it wasn’t so sad.”

“I dunno,” Skunkbreath said. “I think Rand Paul is a bigger putz than Rubio.”

“Guys, guys — settle down,” I said. “We can all agree that Marco Rubio and Rand Paul are each a really big little putz.”

The guys looked at each other, shrugged, and went back to their drinks as the circus continued on the TV screen.

There was finger-pointing at the President about the immigration situation, with no mention of how the Obama administration has increased resources to guard the border to the highest in history and that undocumented migration is currently at zero.

There was more finger-pointing at the President over the Affordable Care Act despite the great success of the program, with more people than ever insured and with healthcare costs rising slower than anyone predicted.

Sadly, the ten capons continually spouted anti-American bombast and anti-humanity concepts. It was as if each of these crooked courtiers had been bribed or hypnotized to ejaculate bad ideas onto that stage. It was dispiriting. It was disappointing. It was disgusting. And it must have been sticky up there.

Let me give one last insight into the mindset of the typical republican: at 17 minutes into the event, Ben Carson was asked about his gaffes and mistakes and it was almost an hour into the broadcast before a second question was directed to him. The two GOP operatives didn’t listen to any of Carson’s answers. I inquired why.

“Why? I’ll tell you why: nobody in the GOP cares what a crazy Uncle Tom has to say about anything.”

The guys didn’t even pay attention late in the program when Carson seemed to embrace torture as a legitimate part of our nation’s war efforts, something that should immediately disqualify him from the contest.

The whole sordid affair ground to a horrifying conclusion with several of the candidates committing blasphemy by merging their religiosity with their troglodyte political views. But that’s just one of many problems decent people face when coping with the conservative hordes.