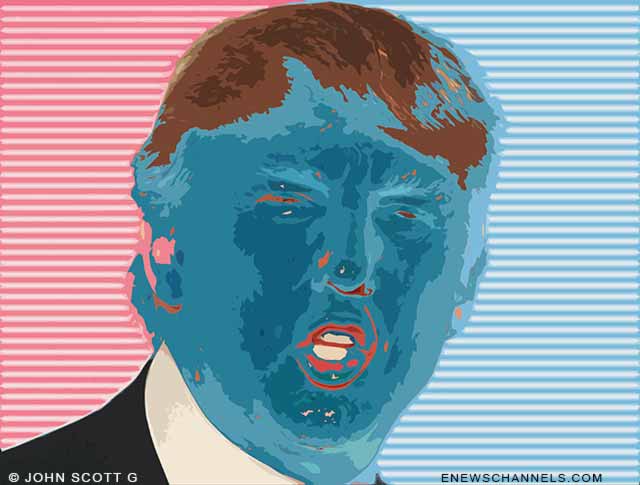 Donald Trump is a living, breathing paradox: he is a smart and savvy performance artist who’s also a moronic and offensive racist. But being a bigoted buffoon is highly prized among Conservatives so he will lead the polls until the GOP splits into two parties, GOPdumb and GOPdumber.

Unless you’ve been in a coma, you know that real estate developer Donald Trump has been topping all the polls for the Republican Party presidential nomination.

Trump’s combination of racism, misogyny, xenophobia, braggadocio, and nastiness has tremendous appeal to Conservative cretins. Hey, this cabal isn’t called the Party of Stupid for nothing.

To ensure favorable treatment by the GOP and their propaganda outlet known as the Fox Fake News Channel, Trump has been teasing them with the threat of running as a third-party candidate.

Such an eventuality would pull votes away from both of the mainstream Republican and Democratic candidates: it would take ten or fifteen percent of the votes away from Jeb or Marco or whichever of the dumbcluck RWNJs wins it. And it would easily pull ten or even fifteen votes away from Hillary.

There was talk that some states holding Republican presidential primaries were going to force Trump to sign a pledge to support the party nominee and not run as an independent. As I’m writing this, Trump is on TV admitting he has given in to this demand.

Traditionally, the path to the nomination has run through the primary elections and caucuses. By competing, candidates amass delegates to the nominating convention. So, if you don’t compete in the primaries, then you don’t win delegates. Right? Wrong.

For the moment, Trump can safely hide behind the “pledge,” a non-legally-binding document that could be ignored. As long as he feels the Know-Nothing Party is “being fair” to him, he simply stays in the race. But if circumstances dictate that he changes his mind before the GOP’s odious Klown Kar Konvention in July of 2016, he can simply ask Republican voters to write-in his name for any primary that doesn’t place his name on the ballot.

Trump’s racist followers will back him on this all the way, especially when it’s pointed out to them that this will be an even bigger F#@k You to the Republican Party establishment than simply telling a pollster that you’re leaning toward the Trumpster.

If he gets even close to his current poll numbers in a write-in candidacy, imagine the power this would give The Donald. If this happened, then the Gnarled Ofay Party would no longer have any control of the process. It would be “All Trump All The Time.” They would have to split into two groups, GOPdumb and GOPdumber, with each side competing for the anti-American voting block.

Either way, we are witnessing the beginning of the new Trumpublican Party. And we all get to enjoy front row seats as Trump tells the GOP they can take their damn ballot boxes and go get stuffed.