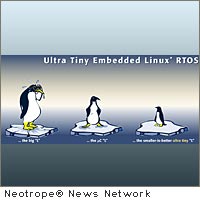 “Our ability to offer a Linux-compliant OS opens the door for a whole new range of RX designers,” said Peter Carbone, senior director, Consumer & Industrial Business Unit, Renesas Electronics America Inc. “Because of the RowBots Unison OS, designers now have access not only to a Linux operating system but an OS that has modular memory so they can further reduce the memory footprint.”

Unison consists of a set of modular software components, which, like Linux, are either FREE or commercially licensed. Full Linux implementations require a CPU with a memory management unit (MMU), embedded Linux does not require an MMU but has a large memory footprint. In contrast, Unison offers POSIX and Linux compatibility with hard real-time performance, complete I/O modules, small memory footprint and an easily understood environment for device driver programming. Seamless integration with applications using POSIX APIs are fast and easy.

Unison comes with 40+ demonstration programs that work out of the box in 10 minutes with HEW.

In addition, join Renesas Electronics America and RoweBots for a live webinar introducing RoweBots Ultra Tiny Linux OS with RX microcontrollers. Attendees will learn how the Unison ultra-tiny Linux operating system, with an ultra-tiny modular memory footprint, supports the RX MCUs with as little as 1K of RAM and 6K of flash.

Unison 4 is FREE and downloadable from RoweBots or Renesas Electronics America for commercial use and includes basic features, documentation, a serial I/O package and a file system. Various upgrades for source code, documentation and networking are available for Unison 4. Unison 5 may be purchased from RoweBots and provides a fully supported commercial version with an extensive feature set, numerous add-on modules, royalty-free licenses, source code, extensive documentation, maintenance, consulting support and 40 plus demos that run out of the box in 10 minutes.

Data sheets and an evaluation version can be downloaded from www.rowebots.com .

RoweBots is developing the next generation of modular ultra-tiny embedded Linux software for embedded OEM applications in the areas of consumer goods, clean technology, portable products, communications and robotics electronics using system on chip. The company is based in Waterloo, Canada. For more information, visit the RoweBots Web site www.rowebots.com .

Roosevelt Lake Cottages: Desert lovers will have the opportunity to own a tiny home in new development south of Payson Jul 21, 2021

Energy Electronics announced that it has entered into a distribution agreement with Sonim Technologies May 26, 2021