The FBI regularly puts out the Ten Most Wanted list. And it is a fun read, let me tell you! You can find it here (http://www.fbi.gov/wanted/topten/ ) if you’re interested in killing some time. Or whatever you’re into killing. I don’t know who composes the entries but in some of the descriptions of the guys on the lam, it often seems you can sense just a hint of a chatty tone creeping into the write-ups:

“Mosilevick possibly has bisexual tendencies and often frequents the nightclub scene,” is one example.

“Owen is a high-functioning mentally-challenged individual who enjoys knife and gun shows,” is another.

It’s a lot like a dating site. Except, y’know, for the descriptions of heinous crimes and assorted atrocities. Oh, and the list of the suspect’s favorite weapons.

Okay, I know what you’re thinking, but no; you won’t find a description of me there. Not yet, anyway. Although I recommend you keep checking from time to time. But we’ve got something for you here that is kinda-sorta like that litany of larceny and mayhem. It’s called the Ten Dreaded Diseases list.

Entries on the TDD list have changed from time to time over the years as cures were developed. However, encephalitis used to be one of the world’s ten dreaded diseases. I like to keep using that phrase, “one of the world’s ten dreaded diseases,” because it sometimes bothers doctors, nurses, scientists, pharmacists, etc., some of whom are upset that I’m still alive. I spoiled their predictions of my demise, you see. 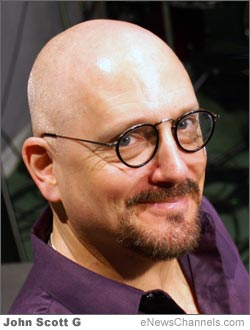 Science never did find a cure for encephalitis. But they found a lot of ways to prevent mosquitoes from spreading it, which is the next best thing. And while most people manage to avoid the malady, I got the damn disease anyway. “So, what is it, exactly,” I hear some of you ask. Here you go:

Encephalitis assaults the central nervous system. If you’re lucky, the effect can be mild, like having the flu. Fever, headache, sore throat, and so on. No big deal, right? But the disease can also create inflammation of the brain. All right, let’s get technical about this. Inflammation of the brain: it means the size of your skull bone is too small for your noggin organ. At that point, you start to have a few teeny tiny issues. Like seizures and coma. And then those are followed by death and pain. Well, I may have the order wrong there, but I have an excuse for getting things mixed up: you see, there’s this strange pressure on my brain….

As everyone knows, healthcare costs money. Sometimes very large gobs of it. So my middle-class parents would be really put through the wringer from a big, bad, dreaded disease, wouldn’t you think? Normally, yes. Except for something that happened just after I was born.

“That’s a mighty fine looking little girl you got there, ma’am.”

“Of course he is, and mighty fine looking. Congrats to you, new mom! Way to go there, new dad!”

“Oh, sorry. Lindstrom’s the name. Hank Lindstrom. And I’m here to tell ya it’s a good thing you good folks have given your newborn the protection he needs.”

“Now there’s no need to worry about the name.”

“I know, I know. It spells SLIMEBUTT. It’s a corporate error. The Board of Directors kind of goofed when they picked it. Committees, huh, whatareyagonna do, am I right? They’re gonna be changing the name. But let’s not concentrate on that right now. Let’s look at how this mighty fine organization has exactly the policy you need for the miracle of lifelong protection.”

“Now this soo-perb policy will protect little Junior here while it builds up funds for him to use to go to college. Or buy a hot rod! Just kidding, folks. Just…kidding. Uh, I’m sure that people like you, living like you do, must be very, uh, moral. Which is why I’m going to throw in the Ten Dreaded Diseases Clause.”

“Oh, it’s a wonnerful rider to your basic policy. If the little guy gets any of the world’s ten most dreaded diseases, absolutely everything is paid for. Specialists, consultants, assistants, radiologists, an’ private nurses ’round the clock. The absolute best of everything. Why, he’ll get so much care you’ll think about getting the plague right along with him!”

“Or Rocky Mountain Spotted Fever. Or any of eight other examples of horrific malady, affliction, contagion or life-absorbing disorder.”

“You know,” my dad said to Mr. Insurance Guy, “you hardly ever hear about the plague nowadays. Unless you read Camus.”

“Oh now why not go ahead and take the Ten Dreaded Diseases Clause. It’s absolutely free.”

A few years and numerous diaper changes later, when I single-handedly shattered the neighborhood record for non-stop screaming, the parental units began a seemingly never-ending succession of trips to see doctors. Wise old doctors, fresh-faced younger doctors, specialists, generalists, and so forth. “Mumps” was one of their findings. “And, um, encephalitis,” they said with that hushed tone doctors use when they would really rather be playing golf. (BTW, it’s pronounced en-seff-uh-LITE-iss in case you want to annoy your friends by telling them about all this.)

Nobody was happy about the diagnosis. Not me. Not my family. And certainly not the insurance company. “The little bugger has WHAT?” exclaimed Mr. Lindstrom, master insurance salesman. “Awwww, now I’ll bet I’m not gonna get my damn bonus!”

Let’s not overlook the advice my parents received. Quite a few people had some very helpful things to say. Like my little Cousin Betty, whose parents brought her to what could only be called a “pre-wake” gathering at my parent’s house. Holding a book that was almost as big as she was, Cousin Betty marched to the center of the living room with a determined look on her face.

“This is a doctor book that my daddy has,” she said solemnly. She poked a dirty fingernail into the book pages where she had placed a piece of lovely pink ribbon, and managed to open the book without having it knock her over. She began reading as if the words were truly important to her, like instructions on the care and feeding of a Barbie Doll.

“Encephalitis,” she intoned with an air of dreadful foreshadowing (which was somewhat undercut by the high and slightly squeaky tone of her voice). “Inflammation of the brain,” she read. “May be a virus carried by an insect. Or a condition of influenza, measles, mumps, smallpox or other diseases. Frequently affecting horses and wild animals, and capable of transmission to man by mosquitoes.”

She paused and sent her wide-eyed sweet-cute little girl gaze around the room. Returning her eyes to the book, she read some more: “Almost always fatal.”

She paused again, bowed, and shut the book with a surprising amount of force. Blam! went the book. “Oooh!” said my grandmother. “Uhhhn,” said Uncle Henry. Those are sounds you might consider the WASP equivalent of “Oy.”

A Silence so Thick

What followed was an uncomfortable silence. Actually, “uncomfortable” doesn’t really go far enough. In the history of the family, this must have been one of the top ten awkward pauses, with the air full of unresolved issues and the atmosphere dense with unrequited hope. A silence so thick you could scoop up sections of it with a gravy ladle.

On and on it went. . . Silence. Tension. Helplessness. Everyone just sitting there, motionless, as if posing for the annual Christmas card photo, with the pressure building up on everyone’s psyche until it began making people sweat. Little beads of perspiration were popping out here and there around the room . . . on this or that forehead . . . on this or that the neck . . . and in all the usual places as well.

It was unbearable! Until this helpful bit of wisdom from Crazy Gerry, who was a close friend of Crazy Larry:

“So yer boy’s got that in-sep-a-light-ness,” he said, as if he was auditioning for a part in a revival of “Oklahoma!” In his case, probably not a Broadway show; perhaps more on the level of a summer production at the Murfreesboro Community Theater.

“Yup, that shore is tough,” noted Crazy Gerry, but with a rise at the end of his sentences, making them seem like questions with no possible answer. “Friend of mine’s a rancher? His horses got the Big E a couple years back when I was visitin’? Those big dumb critters just got all glazed over in the eyeballs an’ they started to walkin’ ’round in circles? All these big ol’ horses just walkin’ ’round and ’round, the circles just gettin’ smaller ‘n’ smaller ‘n’ smaller. . .” He lowered the volume on the final phrase until the last “smaller” was just a whisper. Back at full volume, he added, “And then they just plumb up ‘n’ died.”

“And ladies and gents, lemme tell ya, dead horses ain’t a purty sight.” He nodded at several people as if to assure them that he personally had seen it. “Or smell.”

“Now, there’s just one thing we all need to know,” Crazy Gerry said. He made sure everyone was watching him, took a sip of Granny Pearl’s lemonade, cleared his throat, and then said, “So. Yer boy walkin’ in circles yet?”

“Secret Sex, A Book Alive Online,” written and lived by John Scott G, is Copr. © 2011 by JSG, all rights reserved under U.S. and international copyright conventions. Commercial use in any form is forbidden without express written permission of the author. Originally published on eNewsChannels.com with permission. Credits: Book cover design: Phil Hatten; Author photo: JSG.