The amount of plutonium produced at the plant each day was Pop Secret. Wait, no, that’s a microwave corn snack product. It must have been Top Secret. Yeah, that’s the term we want. The information was protected by a very official classified classification, something like: super ultra-magnificent big important clandestine hotstuff. Or SUMBICH.

I may have the acronym wrong but the point is that there were about seven different security clearances needed to be in the same room with those figures. Although it’s amazing how much data can be discovered with just a little browsing…

We’re in the Reference section of the Richland Public Library. Towering over our heads are shelves full of unpublished thesis papers, half-finished doctoral dissertations, and semi-published notes for symposia, presentations, speeches, grant applications, and a grocery-shopping list. Well, that last one was something that dropped out of my pocket. You could tell it was my list because it only had three words on it: “bubble gum” and “Trojans.”

No, it wasn’t that I needed to do research on the quarrel between Achilles and Agamemnon. I needed prophylactics. Specifically, condoms. While there were lots of brands, the name that we all used was Trojan. This may have been because that company did the most marketing. Or perhaps it was because of what we heard from our fathers and about an aspect of their military service where they were all forced to carry condoms when they got to go on leave. Maybe that was the brand name they used the most often.

I know that Jimmy Doublejoint, sometimes called Double-J or DJ, cracked us all up by quoting the War Department slogan: Put it on before you put it in. DJ seemed to know a lot about condoms. Or at least about a bunch of brands, some of which had interesting names like Durex, Beyond Seven, CautionWear, Undercover, Night Light, and our favorite, Rough Rider. I don’t remember my dad ever mentioning a specific brand name, which made the guys’ conversations about them that much more exciting.

A word or three about Jimmy Doublejoint. His nickname was not a drug or sex reference but acknowledgement of the extraordinary structure of his bones and cartilage, which allowed him to put his arms and fingers into angles that were not normally found in much of the natural world. Oh, and in case you’re interested, drugs will feature in some parts of this narrative, just not yet.

Anyway, the library. In one of those research papers was a formula for determining the daily plutonium production. Yup, right there in an unclassified publication. The only information you needed to work the formula was the temperature of the river water near the plant’s drainage pipe.

Down the Pipe and Up the River

Yes, you read that correctly: the nuclear plant poured some of its waste water directly into the river. Oh, but don’t worry, because…

“There is absolutely no problem with radiation leakage or seepage or anything like that. Of that you can be absolutely certain.” 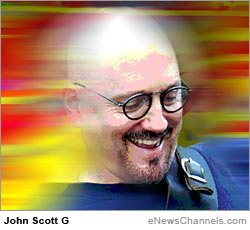 Yup, very similar to the wording used by the maintenance guy earlier. Not sure of the name of the person I’m quoting this time — he was a minor official who was speaking during a presentation at a local PTA meeting. Quite a few listeners did not entirely believe what he was saying. I think some people doubted him because he used “absolutely” twice out of twenty-one words. Also, quite a few residents thought it was peculiar that you couldn’t go night fishing on that part of the river. Not because it was patrolled by boats full of stern-looking men with machine guns, which it was, but because the glow in the water scared the fish away. Or killed them.

My Uncle George, the one who designed and built an experimental plane (and later died flying it), said he didn’t think it was unusual that the formula for determining the daily plutonium output was considered Top Secret despite it being right there on the bookshelf of the public library. “People who have security clearances usually don’t have much use for a library,” he said. “Because books can cause you to think,” he pointed out.

Others in the pod city had different thoughts. “The Dewey Decimal System is, after all, a well-known Communist plot,” was one such idea. The word “idea” having a totally different meaning from the one in the dictionary.

There is a Fear that invades people’s hearts and minds when under a security cloud such as surrounds a secret government installation. A deep-seated Fear of revealing Important Information. You could not, under any circumstances, divulge the number of core rods in the reactors. This would be Classified Information, Eyes Only, Burn After Reading type of stuff. Hell, burn before reading.

One day, my dad’s boss and his wife were over at our house with a few other folks from The Plant, as they called the bomb factory. I mean the facility. The boss’s daughter was getting married next month and so the adults were having an informal get-together to help put addresses and stamps on the invitations to the wedding and the reception.

At one point, my dad looked up from the return address stickers and said to his boss, “Hey did you notice that your home address is the same as the number of core rods?”

The man’s face went as white as a fresh cotton pillowcase. You could almost see the gears grinding away in his head while the sweat glands started working overtime. “Ohmygodohmygod am I exposing a Top Secret?” he seemed to be thinking to himself.

Some of the city “secrets” were ridiculous. For example, another thing that was Top Secret was the number of reactors at the plant. Now, at the time, there were no more recognizable pieces of architecture in the world than the Eiffel Tower, the Taj Mahal, the Great Pyramids of Giza, and the Andy Gump portable toilet. Oh, and a nuclear reactor containment tower.

As you flew into the Tri-Cities Semi-International Airport (slogan: “Proudly serving the people of Richland while conveniently located in Pasco”) you could look down and see all the containment structures. But you were not allowed to say how many there were. In fact, you would often hear people say, “Wow, what a great view of a certain undisclosed number of containment towers.”

The buses which took the workers to and from Reactors A, B, C, and D were named Bus A, Bus B, Bus C, and Bus D. So even if a spy had not flown into Richland but had hitched a ride or walked into town. . .

SPY:  Am thanking you with your helpingness. (To himself, counting on his fingers) A, B, C, D. . .  Is good. Is having five reactors.

A Classroom Can Lack Class

For many reasons, including the one given by my uncle, reading was not a favorite pastime for the sons and daughters of the worker drones in Richland. This enabled the schoolteachers to use reading as a method of torturing their pupils.

“All right, people, get out your readers.”

There was an off-key chorus of groans.

“Read aloud to the room from the top of page thirty-four. . . Bobby.”

There was a pause because I was reading some material that was a bit more advanced than those incredibly stupid “readers” that would have you believe that someone ever said anything remotely resembling “Oh, oh, how I wonder.”

“I am certain that class would be interested in hearing what was occupying you this time. Please do share it with us.”

“I’m sorry. I said I don’t think so.” Yup, I said it just a bit louder than the last time.

“We heard you. We are all waiting to discover just what it is you find so fascinating.”

“Well, okay, but do you remember the last time I told you what I was thinking? About finding the formula for the daily plutonium production.”

“And then someone in the class finked about it.”

“And then they told us we dasn’t use that formula, even though there’s no such word as ‘dasn’t.’ And then they went away after shaking hands with all the adults. But that book with the formula is still in the library. I saw it there yesterday. Is that an example of how adults behave?”

“Now don’t get smart with me, young man.”

“So dumb is better?”

“That will be enough of that! Read from your book this instant!”

“Okay. ‘The rain and the distant thunder were a symphonic backdrop to our lovemaking. She arched her back and slid up her skirt.'”

“‘She uncrossed her legs and her nylons made a sweet singing sound. Her hands went to the front of her blouse and – ‘”

“What is that you’re reading?!”

“It’s called ‘Passion’s Perfect Desire.’ It’s pretty good. Listen: ‘Her hands went to the front of her blouse and she began caressing her generous mounds of — ”

“Bring that book to me this instant!”

“I’m not finished reading it yet.”

“You will go to the principal’s office at once!”

Looking back on my academic career, I can assure you that I got to know the Principal and the Boy’s Vice Principal of every school I ever attended. Not quite certain why.

“Secret Sex, A Book Alive Online,” written and lived by John Scott G, is Copr. © 2011 by JSG, all rights reserved under U.S. and international copyright conventions. Commercial use in any form is forbidden without express written permission of the author. Originally published on eNewsChannels.com with permission. Credits: Book cover design: Phil Hatten; Author Photo: Phil Hatten.