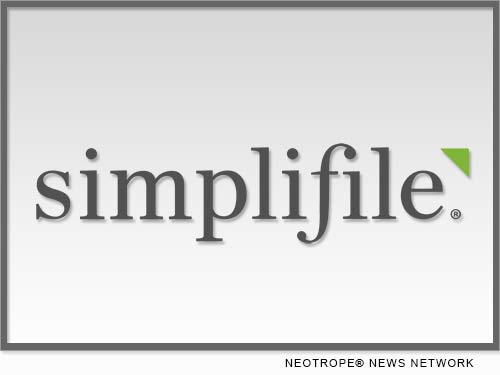 An additional 47 counties and parishes in 28 states joined the company’s e-recording network during the third quarter of the year, bringing its total number of e-recording jurisdictions nationwide to 1,496.

Title companies, banks, attorneys, and lien filers in these jurisdictions now have the ability to securely upload and submit documents directly to recorders’ offices in the Simplifile network via the company’s web-based e-recording service. The recorder is able to electronically review, stamp, record, and return documents back to the submitter within minutes of receipt.

“The beauty of e-recording is that it improves efficiency and reduces costs for both the recorder and the settlement provider without sacrificing the security of the information contained in the recordation documents,” said Clifford. “E-recording is a great example of a momentous and necessary change that results in the best possible outcome for all parties involved.”

“More and more jurisdictions sign on to e-recording every day,” Clifford added. “We foresee a time in the very near future when manual document recording becomes the exception and not the rule, and we look forward to being at the forefront of that paradigm shift.”

Honoring its commitment to service, Simplifile contributed 99 volunteer hours to Habitat for Humanity build days throughout the third quarter. During Q3, Simplifile’s philanthropic program, Simplifile Cares, raised $12,398 at 29 events and through social media campaigns to benefit Habitat for Humanity chapters in 35 states, bringing the total raised this year to $32,408. Since January, Simplifile employees have given 155 hours of their time to volunteer projects.

“Community service is something that is at the core of Simplifile’s corporate culture, and we tremendously value our employee’s ability to give their time and money to Habitat for Humanity, whose mission is so closely related to our own interests,” Clifford said.

Simplifile, the nation’s largest e-recording network, was founded in 2000 to connect settlement agents and county recorders via its e-recording service. Today Simplifile has broadened its services to include collaboration tools and post-closing visibility for mortgage lenders and settlement agents working together on real estate documents. Through Simplifile, users can securely record, share, and track documents, data, and fees with ease.