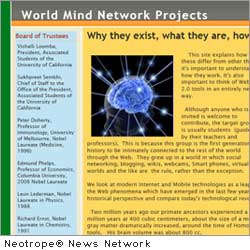 According to World Mind Network Co-Director Sarah Mendel, many of the students were attendees at events sponsored by HSMBB (The Harvard Society for Mind, Brain, and Behavior). Other participants include Dr. Javier Ogembo of the Harvard Medical School and Irina Higgins of the Oxford Foundation for Theoretical Neuroscience and Artificial Intelligence.

Texting, tweeting, Facebooking, microblogging, online video and cell phone apps are not new to students. What is new is the efficient use of all their capabilities in combination to reach important aims in a few hours which the traditional brick-and-mortar academic world would take months or years to accomplish.

The key is the creation of protocols which serve as formulae for easily setting up Internet based projects which achieve well-defined goals, are infinitely replicable, grow by themselves through social networks, and enable each student to carve out a Web niche which serves as the Internet’s focal point for the student’s chosen issue. In practice, this means that each student is experimenting with making their work more public, and yet more personal, at the same time.

Says WMN advisor Wolfram Ruisdael “The Cloud of knowledge, creativity, innovation, and even wisdom represented by the Internet is now incomprehensibly vast. Its power to solve both traditional and new human problems is almost infinite, but until now Humanity has not really demanded the efficient use of it to refine theories instantly, generate new ideas, build communities, and get innovative thinking from where it originates to where it is needed. Students, because of their familiarity with these technologies, are the natural creators of the new change-making networks.”

Crucial to many of the new protocols are programs like Apple’s Siri artificial intelligence app for the iPhone 4s, Facebook’s Timeline, Google+, Pinterest, and msnNOW.

A typical protocol is this one for Disaster Relief, which the network used during the 20ll Fukushima earthquake and tsunami in Japan, as well as more recent floods in Thailand and the Philippines:

1. Create a landing page on Google sites with RSS feeds of latest news, including links to on-site organizations which need help;
2. Use search engines to find and rank current Twitter trackers for affected area;
3. Do the same for Facebook post monitors;
4. Do the same for SMS (texting) monitors;
5. Collate trackers on a Bing map so that rescuers can be connected with victims in real time;
6. publicize site with online press releases.

Among other programs, students have participated in projects which

– Created the world’s largest collection of pre-1900 archival French audio recordings and preserved them with iTunes and Windows Media files;

– Advised legislators in Nepal who are re-framing the national constitution;

– Built the world’s largest online crowd-sourced environmental investigation which discovered several causes for a sudden fish die-off in Taal Lake in the Philippines, and suggested treatments which were successfully implemented.

For more information go to http://Facebook.com/HarvardWorldMindNetwork – or – or write to worldmindnetwork@gmail.com.

The Leverage Network (aka MALVA), A Network of Women Coaches Emerge to Support Their Communities and One Another Mar 18, 2020