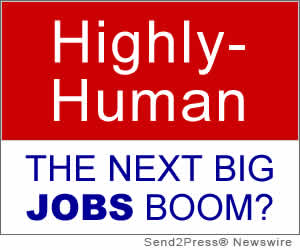 MOUNTAIN LAKES, N.J. (SEND2PRESS NEWSWIRE) — As Walmart tests iPhone checkout, the cashier’s job moves closer to extinction, a fate shared by many routine jobs in most industries; but there’s a bright new countertrend, according to an employment report from EraNova Institute.

What is the countertrend? Is it the imminent creation of millions of high-tech jobs? No, according to the report. Most of the existing technical jobs are an endangered species, like cashiering, because they too involve functions that fast-evolving technology can assume.

The report gives evidence that we’re on the brink of a “highly-human” jobs boom, with millions of positions requiring skills that only conscious beings can provide. These jobs will span all major industries and professions.

Titled “Highly-Human Jobs: The New Work That Technology Can’t Take Over,” the report documents an emerging employment model that elevates purposeful, creative, caring, very-much-alive people above smart, efficient, unconscious, unfeeling systems, no matter how “intelligent” they may be.

“Humans actually have valuable skills and qualities that even the smartest technology can’t match,” says Richard W. Samson, the report’s author. “By leveraging those non-automatable characteristics, we have an excellent chance of creating a very large job market.”

Highly-human skills, ranging from creativity to responsibility, will be vital even in high-tech professions such as biotechnology, robotics, and renewable energy, the report predicts. “People will be needed in these fields when they act like people rather than trying to compete with artificial intelligence,” says Samson. “AI and advanced systems can easily trump humans in the automatable aspects of biotech research, robotics development, and so on.”

Robust job creation need not continue to be such a tough issue for policy makers, Samson believes. “As Washington and business leaders learn more about the highly-human trend, they’ll be in a position to re-evaluate and re-strategize. We’re available to help. We know the characteristics of the new jobs and how government, industry and individuals can prepare for them.”

“America and the world need to get off the endangered-jobs treadmill,” he adds. “It’s time to jump on an elevator to full employment and the best jobs yet.”

Journalists, broadcasters and bloggers may request a complimentary copy of the EraNova report at highlyhumanjobs.ning.com, a website that is a service of EraNova.