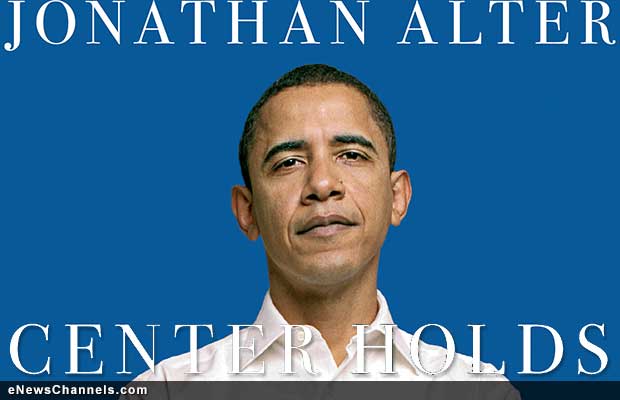 REVIEW: Every presidential election is deemed crucial to America but with the choice of Obama versus the obviously unqualified Mitt Romney, it was more than crucial; it was imperative. In the detailed yet fast-paced ‘The Center Holds,’ author Jonathan Alter takes you inside the campaigns and reveals some of the evil forces backing the GOP.

One of the basic contentions of Jonathan Alter’s “The Center Holds” is that the extremes of the political spectrum were repulsed in the election of 2012, that the democrats and Obama successfully represented the middle-ground position in American policymaking. This is not quite true, of course.

Obama and the democrats are only kinda-sorta near the midpoint, with people like Bernie Sanders being a great deal closer to the actual center, leaving Obama on the conservative side of many issues. But if it’s extremes you want to see, well, Alter outlines the dangerous views of the right-wing nut-job party as it lined up against this evenhanded and rather uncontroversial president.

Alter is one of those writers who can give you a lot of detail without bogging down the flow of the narrative. You are easily carried along with the story and even feel a bit of edge-of-your-seat tension despite knowing the outcome of many of the events.

Before proceeding any further, here is a quick comparison to works in the genre of “big election books” — this one is more exciting than any of the Theodore H. White “Making of the President” volumes and drier than Hunter S. Thompson’s “Fear and Loathing on the Campaign Trail 1972,” which is still the best book on the subject ever written and semi-edited. 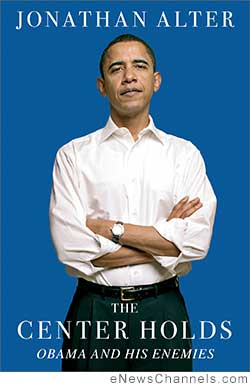 Alter sets the stage with six chapters that read like a horror tale. In a crisp and vicious 82 pages, he presents the results of democratic voters’ shocking laziness in the 2010 midterm elections (“The Shellacking”), the treacherous activities of the tea-baggers (“Tea Party Tempest”), the anti-Americans who have become willfully blind (“Obama Derangement Syndrome”), the turncoats who want to undermine our national experiment in self-governance (“Strangled in the Bathtub”), the people who lie for a living (“Fox Nation”), and the USA-haters who want to destroy the very concept of representative government (“The Voter-Suppression Project”).

Many of these craven cowards and sub-human creatures choose to dance at the intersection of racist and crazy while others pretend to have some sort of “philosophy” to guide their perfidy. Either way, throughout the book you’ll find the usual suspects — Grover Norquist, Roger Ailes, Mitch McConnell, the Koch brothers, and Karl Rove — but also lesser-known effluvia like Jerome Corsi, Edward Klein, and Dinesh D’Souza. The dangerous buffoons of the GOP probably deserve a book of their own (in addition to padded cells behind very high walls) but the main thrust of this volume is the way decency managed to triumph over evil.

In particular, the chapter called “The Shellacking” is a horrifying spectacle in which America is battered by moron after moron, demagogue after demagogue, and loon after loon. It is literally sickening to read about 63 House seats, 11 governorships, and more than half of state legislatures succumbing to troglodytes, misanthropes, racists, and fools.

It is distressing to watch the very worst of humanity achieve temporary success, but Alter makes certain to note that complacent democrats have to share quite a bit of the blame. If good people do nothing, bad people will take the reins of power. As our once-proud nation is mauled by the grubby little hands of the GOP, America lives down to its lowest expectations. Or, as one acquaintance of mine put it, “In the rise of people with tea-bags-for-brains we see what a profoundly stupid place your nation has become.”

Sadly, it is difficult to argue that point when toting up the GOP litany of racism, misogyny, homophobia, xenophobia, plutocracy, theocracy, and hypocrisy. Not to mention their saber-rattling on a massive scale or their frequent spitting on such constituencies as veterans, students, retirees, and anyone who might have occasion to utilize health care or infrastructure.

Also, consider the moronacracy that has been created by the crypto-Fascist Koch brothers, funders of the tea-bagger horde:

The willful misuse of history was inevitably part of the Tea Party story. Harvard professor Jill Lepore argued that Tea Party activists practiced “anti-history,” a form of retroactive reasoning that allowed them to say with a straight face that “the founders are very distressed over Obamacare.” They also practiced “historical fundamentalism,” in which the Constitution and the Declaration were applied as if they were religious doctrines.

There was also the ongoing hypocrisy of the GOP on issue after issue. Take, just for one example, their duplicity regarding taxes:

In 2012 the Congressional Research Service, a nonpartisan agency of Congress, looked back over decades of economic studies and concluded, “The reduction in the top tax rates appears to be uncorrelated with saving, investment and productivity growth.” Shortly before the 2012 election, Senate Republicans pressured CRS to squelch the report.

Faith and Hope and Action

Despite everything, Obama’s faith in the American people remained extraordinary. One might even say misguidedly so. Obama apparently did not foresee (or initially did not believe) Mitch McConnell when he told a RWNJ publication, “The single most important thing we want to achieve is for President Obama to be a one-term president.” But yes, republicans put their own self-interest above the needs of the nation, above the needs of citizens. This is in stark contrast to the president:

Obama had moved ahead with the auto bailouts even though they were unpopular even in the industrial Midwest, and with the Affordable Care Act despite being told by all of his top advisers that it was a loser with voters. He was betting on the ebbs and flows of fortune in politics, where time can change anything. The 2012 presidential election would resolve whether doing unpopular things to help the country could end up as crowd-pleasers down the road.

One might reach the same conclusion about Obama’s decisions on the stimulus, on ending tax cuts for the rich, on marriage equality, and the killing of Osama Bin Laden, but he made those hard choices for the public good instead of for political gain.

That’s part of the context in which Obama had to run for re-election. Daunting odds made all the more formidable by outliers like Grover Norquist, whose actions have a particular stench:

Consuming political tracts from all perspectives, he quietly adapted Lenin’s idea of a “vanguard of the proletariat,” by which a small group of zealous intellectuals would master power politics and execute choke holds on the old order. Norquist simply substituted “freedom” for “the proletariat” and moved to Washington to build his conservative vanguard…

Most of the rest of us would argue against the use of the word “intellectuals” in that description; “sock-puppets” or “asshats” being much more suitable terms.

Alter is far too easy on the fear mongers of the Faux News network but at least he points out that “Fox Nation wasn’t a nation after all. It wasn’t the real America, the country’s heart. It was a bubble, though the people inside didn’t know it yet.”

Far more damaging to democracy than a propaganda channel calling itself “news” is GOP voter suppression, which is still being waged with the help of republican governors, republican legislatures, republican congressmen, and the American Legislative Exchange Council (ALEC).

Starting in early 2011, the GOP, often using ALEC model bills, launched quiet voter-suppression campaigns in forty-one states. It was the most systematic and pervasive effort to discourage voting in almost a century. GOP state legislators introduced 140 bills to restrict voting, and by mid-2012 sixteen states had approved legislation, including the battleground states of Ohio, Florida, Colorado, Virginia, Wisconsin, New Hampshire, and Pennsylvania.

Neo-cons often get red-faced about all this (to match their red necks, I guess) but they have no sense of shame about it since racism is part and parcel of GOP politics. “In 2010, according to a lawsuit, 94 percent of new African American voters were challenged at the polls, compared to 16 percent of new white voters.” Alter points out that the inherent racism of the GOP was just part of their goal since “The new laws also discriminated against students, the elderly, and anyone who didn’t drive.”

Some of the hype for “The Center Holds” promised a peek at the new methodology that will affect political campaigns in the future. It’s not a huge part of the book, but here are some of the ways the 2012 Obama team worked things a bit differently from what was expected:

* The Obama campaign went after the immorality of Romney early and strong, with more than fifty million dollars of broadcast advertising to emphasize the lack of human decency in that empty suit known and loathed as UnfitMitt.

* Ongoing activity in every contested state. “In Ohio, for instance, where several paid organizers on the ground never left after 2008, regional field directors quickly established a thousand neighborhood teams to handle eight thousand precincts–more than a year before the election.”

* Actively pursuing something called “modeling on persuasion,” which enabled Obama supporters to more easily connect with likely voters — especially ones who were on-the-fence — on an issue-by-issue basis.

Part of the democratic thrust was to battle back against inanity, prevarication, “etch-a-sketching,” and misinformation. This meant, just to take one example, reducing arguments in favor of the Affordable Care Act to bumper sticker slogans. Alter put one of these points oh-so-kindly: “Explaining that taxpayers were paying more by subsidizing emergency room care for the uninsured was too complicated for the shorthand of modern communications.”

It also meant trying desperately to find new ways to point out that Mitt Romney’s statements were utter bullshit. Oh, excuse me. I meant lies. What? Oh, we aren’t even supposed to make that simple statement of fact? Well, here’s how Alter described Romney: “disingenuous.” And “flip-flopping.” And “infelicitous.” And “factually wrong.” And “factually untrue.” And… you get the idea.

But sometimes there’s nothing that can be done about stupid, especially when the foolishness affects most of the American people. Consider the first Obama/Romney debate. Despite the litany of lies from Romney, people actually stated that they thought he had “won” the debate. The man spewed phrases dripping with excrement for his entire share of the program, yet there were citizens who judged him the “winner.” Presumably this was because he spouted his lies with the enthusiasm of a traveling salesman attempting to unload bottles of Ye Olde Snake-Oil Liniment and Cough Syrup Remedy (“Cures all ailments, suppresses minority voters, hides your money from taxes, and destroys American jobs to increase your own personal profit — stock up on some today!”)

The ups and downs of the campaign are presented in fact-packed pages that you will enjoy turning almost as much as a book you might take to the beach for your “summer read.” There are so many nifty sections that I have nearly four dozen more passages marked for comment or quotation but this review is already getting lengthy.

So what’s the bottom line on this work? It’s history as thriller. It offers great perspective on current events. It provides superlative insights into the hearts of good people. And in its examination of the defective souls in the GOP, it sometimes reads like a demonic liturgy — which is fascinating and appalling in equal measure.

In short, “The Center Holds” is a terrific book and my biggest quibble pertains to the subtitle; much of this work is about America’s enemies, not just Obama’s.

Article is Copr. © John Scott G and originally published on eNewsChannels.com – all commercial and reprint rights reserved. Disclosure: no fee or any other consideration was paid to this site or the reviewer by the book author, publisher or any other agency in relation to this unbiased review.