AMES, Iowa — Biotronics, Inc., a food animal ultrasound research and development company recently received a $150,000 Demonstration Grant from the Iowa Department of Economic Development. According to Doyle Wilson, President of the Company, these dollars supplement a $350,000 U.S. Department of Agriculture grant they have received to develop and test their first commercial prototype system to measure the amount of intramuscular fat, commonly called “marbling,” in the pork loin of carcasses in the packing plant. Highly marbled pork is a trait that is valued by foreign markets such as Japan, Taiwan and South Korea, by some USA niche markets, and by many chefs in the white table cloth restaurant business. Marbling adds flavor and juiciness to pork. 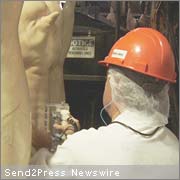 According to a recent National Pork Board Fact Sheet on “Marbling and Pork Tenderness,” years of selection for reduced external fat thickness by the swine industry has resulted in great reductions in the amount of marbling that exists in pork loins today. According to this source, pork steaks with 2.5% intramuscular fat and less are classified as devoid of marbling.

A very large portion of pigs harvested in the USA today will have marbling levels in the 1.0 to 2.5% range and are classified as devoid of marbling according to the National Pork Board report. Wilson reports that when scanning pork loins in a large Midwestern pork packing plant as a part of the Biotronics’ project, about 57 percent of the carcasses scanned had 2.5% or less intramuscular fat. Those results were verified with an unbiased third-party fat analysis on all of the carcasses scanned.

With such a large portion of today’s harvested pigs falling into this “devoid of marbling” category, many pork processors have gone to mechanically injecting the product with salt solutions and non-meat flavor enhancers to artificially restore what has been lost through breeding for leaner pigs. These products are labeled and marketed under what is referred to in the trade as “Enhanced Pork.”

Wilson says that their ultrasound technology is a noninvasive and safe method to measure marbling in pork carcasses. The first commercial prototype will be ready for testing in 6 to 9 months. The technology is used on the intact hot carcass, within minutes after carcass harvest and before the start of the chilling process. In the research tests conducted to date, the system can operate at speeds of 1,200 carcasses per hour. According to Wilson, this is a line processing speed being used today by many U.S. pork packing plants. The company is actively seeking interested pork packing plants that want to take advantage of the ability to sort carcasses into low and highly marbled product lines.

Wilson believes that his company’s ultrasound technology will allow packing plants to capitalize on identifying highly marbled pork loins for specialty markets. For plants that have the ability to track individual pork carcasses, the packer can provide ultrasound information back to the producer of the pigs to assist in genetic improvement programs for pork quality.

Biotronics, Inc. has developed and sells ultrasound technology and software under the trade name of BioSoft Toolbox(R) for Swine around the world for use in the breeding selection of live pigs. Young boars and gilts are scanned and measured for their amount of marbling, along with external fat thickness and loineye area. Only those animals that meet acceptable levels are selected for breeding. Wilson, an animal geneticist and a professor emeritus from Iowa State University, says that swine breeders can genetically improve the amount of marbling in pork without increasing the waste fat by paying attention to the breeding stock and selecting only those animals that excel in marbling.