eNewsChannels COLUMN: Wisdom and wit make a devastating combination, which is why The Rachel Maddow Show is steadily charming its way into the hearts of progressive thinkers all across America. Now, with Maddow’s examination of how the USA has altered its ways of war, she has upped the stakes considerably with a book that can help refine our nation’s war policy decisions for coming generations. 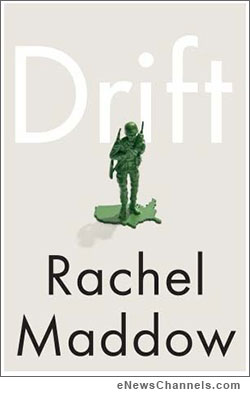 Full disclosure: there is love in my heart for Rachel Maddow. Oh sure, a few minor difficulties need to be overcome in order for the two of us to pursue a relationship. As a straight male who claims to be five-nine but who is really only five-eight, my deficiencies in terms of “the feminine factor” and “the height factor” may give pause to a tall lesbian such as the lovely Rachel.

My obvious lack of “the hunk factor” can be overlooked because of the “beauty and the beast” syndrome, as happened with Claire Bloom with Rod Steiger, Julia Roberts with Lyle Lovett, Padma Lakshmi with Salman Rushdie, and Dita Von Teese with Marilyn Manson. True, these are dated references, and not all of the relationships lasted all that long, but (A) you can Google them, and (B) it’s safer to let the distance of time remove some of the sting of pointing out the physical deficiencies of most of today’s male heartthrobs.

Then, too, my average-level intelligence could be seen as a detriment when compared to someone with the acumen Rachel demonstrates on her TV show and in her public appearances. Not to mention the disproportion in our academic credentials (her bachelor’s in public policy from Stanford and her doctorate in politics from Oxford are just a tad more impressive than my bachelor’s and master’s in drugs, oops, I mean in art and filmmaking).

But it is my belief that we can get beyond all those superficialities.

It is in our mutual embracing of the merits of a humanistic approach to the world that we can find common ground for sharing. Here, of course, I refer to her love of a cocktail on Friday nights. Wait, no, I mean her love of logic and her admiration for policies that work for the betterment of society as a whole.

Also, she’s damn funny. A question about her politics garnered this not unreasonable observation: “I’m undoubtedly a liberal, which means that I’m in almost total agreement with the Eisenhower-era Republican party platform.” And if that doesn’t bring a smile to your mug, then go back to the gloom-meisters on the vile Murdoch/Ailes FauxNews.

While Drift is a serious work, there are tremendous grins to be enjoyed in many of Maddow’s comments and observations. Best of all, these flashes of wit leap out at you in every chapter, often at the ultimate point in one of her deft delineations of the historical facts. For a work this fluid, there is an amazing amount of history here and it all goes down quite easily. Anyway, the point is that Maddow can be as cunningly comedic in print as she is during her broadcasts, so those without a sense of humor are hereby forewarned.

Whys and Wherefores of War

Despite some carping from the Wrong (read “the Right”), the premise of this book cannot be summed up in the first line of an Edwin Starr song. (“War, unnhh! What is it good for?”) Maddow is accepting of war’s necessity, as long as it is debated and declared. Of war’s justification we can argue, and we should. Then, contrary to the way we currently act with our armed forces, Congress should declare war and the nation should be involved, at least in terms of available knowledge of the scope, duration, cost, and consequences of the battle.

But through a series of often subtle but sometimes Brobdingnagian steps, the USA has drifted into a whole new and anti-constitutional method for waging war. Maddow lays it out beautifully, in prose that is an amazing blend of the scholarly and the friendly. Her writing seems to combine a litany of facts with a lovely talk from a worldly-wise and kind friend who’s giving you much-needed dating advice.

The whys and wherefores of our country’s slide into a perversion of what our founding fathers wanted are carefully spelled out by Maddow. She’s pretty spot-on specific, although the general reasons for the drift all come down to money, power, and a cavalier attitude toward the basic intelligence of the American people.

Throughout the book, she’s not afraid to name names, from the Continental Congress forward to familiar newsmakers. In more modern times, beginning with JFK and LBJ, Maddow points out that the USA’s Way to War underwent some fundamental changes: a twist in the interpretation of the law here, a look-the-other-way from Congress there, a grab of power by the Presidency everywhere, and suddenly, we find ourselves in a place far different from where Thomas Jefferson, James Madison and others had carved out for us:

Rational political actors, acting rationally to achieve rational (if sometimes dumb) political goals, have attacked and undermined our constitutional inheritance from men like Madison. For the most part, though, they’ve not done it to fundamentally alter the country’s course but just to get around understandably frustrating impediments to their political goals. The ropes we had used to lash down presidential war-making capacity, bindings that by design made it hard for an American president to use military force without the nation’s full and considered buy-in, have been hacked at with very little appreciation about why they were put there in the first place.

And now we are a nation almost permanently at war, with little debate, less oversight, spending off-the-books, the horror unseen, the sacrifice unequally shared, and the service unacknowledged.

Worst of all, the results are questionable. Except, you know, for the obscene profits of the military-industrial complex as well as privateering firms like Brown and Root (Halliburton), Blackwater (which became Xe, which became Academi), DynCorp, and their ilk.

Not to mention where our policies leave us:

Unless three-ton V-hulled armored MRAP trucks and pilotless flying killer robots are going to provide the basis of America’s new manufacturing base for the twenty-first century, we’ve built ourselves — to the exclusion of all other priorities — a military superstructure we can’t use for anything other than war and that we can no longer afford.

Gotta hand it to our gal Rachel, she makes her points with a durn fine use of the English language:

Cheney had cut his bureaucratic teeth (and exceedingly sharp they were) as White House chief of staff during the Gerald Ford presidency, back when Congress was first wielding its War Powers Resolution (stupid regulations!). . .

Civilian life has rolled on virtually uninterrupted. If you’re not in a military family, you’ve barely even felt it. The country has perfected the art of frictionless war. America’s wars thrum away like Muzak in the background here in the United States, kind of annoying when you tune in, but easy enough to tune out.

The federal government spends “about $55 billion a year on civilian intelligence (that’s not counting $27 billion for military intelligence)” but citizens are not allowed to know much about any of the spending of our dollars. BTW, that’s 82,000,000,000 bucks.

Since we dropped bombs on Hiroshima and Nagasaki, the US has spent the equivalent of eight trillion dollars on nuclear weapons. That’s $8,000,000,000,000 if you are wondering about the zeros.

And the costs roll on, right along with the waste, most of it just kinda-sorta swept under the rug. A big, and soon to be very threadbare, rug.

Can we work our way out of this mess? Maddow is actually very upbeat on this point: “The good news is we don’t need a radical new vision of post-Cold War American power. We just need a ‘small c’ conservative return to our constitutional roots, a course correction.” As she states about how we’ve drifted off course, “It wasn’t inevitable. And it’s fixable.”

In a stunning three-and-a-half page section at the book’s conclusion, she shows how the repairs can be made. How we could un-drift. The section is just ten paragraphs long. It’s about 900 words or so. Nine hundred of the most sensible words ever written about our national policy of war. Write your Senators and Representative and ask them to read the Epilogue, if not the whole book. The country, and the world, will be better for it.

Article is Copr. © 2012 by John Scott G, and originally published on eNewsChannels.com – all commercial and reprint rights reserved. Disclosure: no fee or other consideration was paid to JSG in composing this review by any third party involved in publication or promotion of the book being reviewed.