eNewsChannels COLUMN: Mounting well-reasoned attacks against those who seek to steal, degrade or destroy creative works is not an easy task these days but Robert Levine accomplishes it with wit, style and taste. That he also points the way toward some possible solutions just makes the book even more valuable. 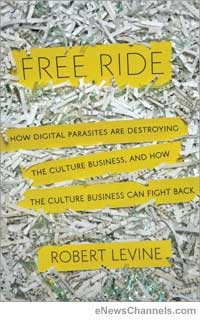 The marketing push sometimes seems to be a bit much for “Free Ride,” Robert Levine’s exciting first book, but the people at Doubleday/Random House can be forgiven because the work is genuinely important. It’s also what is known as a good read.

Well, a good read if you’re interested in how the greedy and unscrupulous seek to financially rape writers, artists, photographers, musicians, composers, filmmakers, and others who create.

The Introduction certainly lives up to the hype surrounding the book. Quite simply, these dozen pages are terrific. This essay should be must reading in every law school, dorm room, and corporate suite. As Levine points out, “The Internet was supposed to empower creators, corporate and independent alike…It’s time we acknowledge that this isn’t happening — and that it won’t until we turn the online free-for-all into a free market.”

He also points out how the forces for evil often misquote information to serve their own avaricious ends, as with the out-of-context use of Stewart Brand’s statement that “information wants to be free.” The words may be accurate, but without context they are very wrong. Levine provides the full quote:

The rule of law is important to a free society, something Levine obviously cherishes, and he is concerned that we have laws that do not function properly. “I’ll start my story,” he writes, “with the Digital Millennium Copyright Act, a 1998 law that media companies first championed and technology companies managed to manipulate into a compromise that undermined the market for media online…”

Note: I am not objective on the subject of the DMCA, having written an article calling it “Denying Monetary Compensation Always,” which can be found here:

All the usual culprits are in the book, from the Napster twerps and brain-damaged Grateful Dead lyricists to the Google/YouTube empire. Levine gets comments from a lot of them and the effect is often quite damning. Arianna Huffington, for example, comes off surprisingly badly, appearing to be a whining, imperious greedhound who is no better than the rightwing oligarchs she pretends to fight.

He takes the time to demonstrate how proposed laws must traverse a snake-pit of Senate and House sub-committees plus all the backroom swappin’ ‘n’ tradin’ that goes on in Washington, noting that no one appears to spend much time thinking about what is best for the public.

While consistently demonstrating sympathy for those whose lives involve actually creating what some people callously dismiss as “content,” Levine still appears unusually fair to all sides of the issues.

He deftly handles Metallica’s brave attempt to take on what many of us called “nabster,” revealing the misperceptions and misunderstandings of that event. Reported here for the first time is the fact that the band was hung out to dry by several other major acts. Also dealt with is the way “for-profit technology companies deliberately set out to make money form piracy and never came up with a workable plan to pay artists.”

Again and again, Levine displays a dry wit, as in commenting on people who talk about growth in the music business if iPod sales are counted. “Since in the United States none of this revenue goes to anyone who makes music, this is like saying the clothing business is booming if you count the installation of custom closets — both technically accurate and entirely beside the point.”

This chapter examines the uneasy and queasy who’s-in-bed-with-who world of technology companies and telecom firms. Quote after quote and fact after fact show the gluttony of those who want to destroy copyright in order to line their own pockets.

Haunting the pages of the book is the scumbag ex-Stanford professor of sham (who shall remain nameless here as I in no way wish to provide him any extra publicity) who advocates the non-concept of “free culture” while making certain everything he publishes is protected by copyright.

Levine’s chapter on newspapers devotes quite a lot of space to the efforts of News Corp., one of the most disreputable conglomerates in the world. Ironically, they are making some smart moves in monetizing their presence on the ‘Net. But the sad part of all the digital changes is summed up in two ominous sentences:

At a time when Americans have faster and easier access to more information than ever before, they don’t seem to be any more informed than they were two decades ago. In a November 2010 study, for example, only 14 percent of Americans identified John Boehner as the presumptive Speaker of the House of Representatives.

TV or Not TV

In a world where abusive websites offer stories like “9 Great Gifts for the Media Pirate in Your Life,” Levine and others may often seem lonely in their morality.

And while some consumers will always pay for content and others will always take it without paying, the behavior of the vast majority of those in the middle depends on who the online television systems of the future will work.

Fun Amidst the Farrago

The more you read of Levine’s prose, the more enjoyable it becomes. Consider these wonderful observations:

…Megaupload, owned by a Hong Kong-based company that also runs the streaming service Megavideo and the self-explanatory Megaporn.

Apparently, the movie distribution business can be quite lucrative if you don’t have to cover the expense of making films in the first place.

All of this costs money, which authors need while they write, rather than later….it’s not that easy to give a book away, since it’s harder than most people realize to write one.

A specter is haunting Europe — the specter of piracy.

As anyone involved in health care can tell you, what works smoothly in Scandinavia can start fights in the United States.

In Western Europe, voters tend to see regulations on commerce as a way to protect their rights rather than limit them; generally speaking, they tend to want freedom from the market, rather than for it.

Although there are hints to possible solutions throughout the book, there is no getting around the fact that this is primarily a litany of woe and economic carnage until the final two chapters. “Blanket Protection” goes into some detail of ways that blanket licensing might be the compromise that would allow a way out of the current mess (although the twits and nimrods are already incorrectly calling it a tax, which is a lie worthy of the likes of the GOP’s Frank Luntz). “The Future of the Future” deals with the openness of the ‘Net and how laws can be enforced properly. Trust me, it reads a whole lot better than I just made it sound.

Things move fast in the digital world. In the news as this review is being written are two stories that relate to the book. The first deals with the Stop Online Piracy Act (SOPA), the House’s version of the Senate’s Protect IP Act of 2011, both of which will increase the Dept. of Justice’s ability for enforcement against infringing sites.

Can one take issue with elements of the book? Sure. Levine’s fairness sometimes prompts him to go in too many directions at once, although things get sorted out by the end of each section.

Parts of the book seem rushed, but fortunately nothing is major. Examples: the U.S. Telecom Assn., the Briefing site, BT (the ISP, not the musician), the TalkingPointsMemo site, and the very important concept of “orphan works” are all in the book but not listed in the Index.

ASCAP first appears on page 94 but the acronym (American Society of Composers, Authors, and Publishers) is not spelled out until page 219. The organization is mentioned in an important section on page 214 but it isn’t in the index. The acronym BMI (Broadcast Music Inc.) is never spelled out.

No big deal for any of those things (other than orphan works), but it would be nice if corrections were made for the next printing. A book this good deserves that kind of attention to detail.

Finally, to all the crooks, scoundrels, liars, prevaricators, mountebanks, and parasites out there, let me conclude with the quote Levine uses to begin his book:

Everyone has the right to the protection of the moral and material interests resulting from any scientific, literary or artistic production of which he is the author. — Article 27, Universal Declaration of Human Rights, 1948

Article is Copr. © 2011 by John Scott G, originally published on eNewsChannels.com – all rights reserved. No fee or other consideration was paid to the author of this original article, or this site, or its publisher, by the book author or its publisher.