REVIEW: A newcomer to American politics would write off the Republican Party as a gang of xenophobic, racist, theocratic, misogynistic, fiscally irresponsible war-mongers. In “Rule and Ruin,” Geoffrey Kabaservice explains how and why this happened. 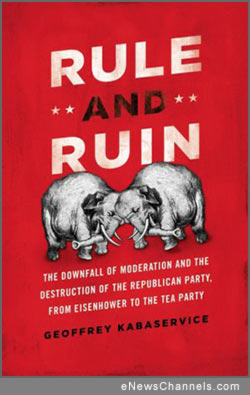 Difficult as it may be to believe, there once were people of some decency in the Republican Party, men who “spoke out against the power of monopoly, inherited wealth, and vested interests.” Yes, ladies and gentlemen, boys and girls, it is a verifiable fact that there used to be some members of the GOP who “put forward social programs that included unemployment insurance, sickness and disability benefits, old age pensions, slum clearance, state aid to education” and more. I know! Unbelievable!

These people did something that is heresy in the Republican Party today: they acted in the public interest for the betterment of society as a whole. Not only did they grasp the concept behind the formation of our country, they tried to live up to those lofty goals and principles. Would that those days would return.

Unfortunately for the nation (and the world), the current GOP is “almost entirely composed of ideological conservatives” engaged in “silencing, co-opting, repelling, or expelling nearly every competing strain of Republicanism from the party, to the extent that ‘liberal Republican’ or ‘moderate Republican’ have practically become oxymorons.”

In prose that is consistently absorbing, author Geoffrey Kabaservice lays out the causes and reasons for the GOP’s descent into what everyone now recognizes as a gaggle of RWNJs (that’s “right-wing nut-jobs” for those of you who are just getting into following the perpetual political silly season being foist upon us by Republicans).

Kabaservice, a contributor to many periodicals and the author of The Guardians, a National Book Award nominee, takes a reasonable tone for his analysis of the GOP’s most recent sixty years or so. He observes, as we all have, that there is a peculiar stench emanating from the conservative side of Congress as they shovel sand in the gears of government.

While there are many possible reasons to explain the present American political dysfunction, the leading suspect is the transformation of the Republican Party over the past half-century into a monolithically conservative organization. Throughout American history, the two principal political parties — whether those parties were Federalists and Whigs or Democrats and Republicans — had been coalitions of interest rather than ideological vehicles. The Republican Party as recently as the 1960s had contained large numbers of moderate and even liberal representatives.

The transformation of the GOP into the party of perfidy began long ago, but the current outrages can be traced to such disreputable figures as Senator Joseph McCarthy, William F. Buckley Jr., Barry Goldwater, and those of their ilk, and it continued with the likes of Karl Rove, Lee Atwater, Phyllis Schlafly, Dick Cheney, Newt Gingrich, Mitch McConnell, and Donald Rumsfeld, or “forces that continue to warp and distort modern politics.”

Conservatives opposed federal efforts to desegregate the South, usually on constitutional grounds but in some cases because they approved of racial segregation. In 1957, National Review, which acted as the mouthpiece of this form of conservatism, carried an editorial by Bill Buckley asking “whether the white community in the South is entitled to take such measures as are necessary to prevail, politically and culturally…The sobering answer is Yes — the white community is so entitled because, for the time being, it is the advanced race.”

Buckley excelled at offal of this type. He could prosper from it only with the support and encouragement of the GOP mainstream. Considering the typical statements made by members of the GOP clown show, it should come as no surprise that Buckley is held up as an example of the “intellectualism of the right.”

Or consider this wonderful summary of the GOP’s “taker” philosophy:

Goldwater, like many Western and Southern conservatives, was only a rhetorical conservative in fiscal matters, representing a region that clung to a self-image of rugged individualism while gobbling up millions of dollars of federal defense and public works spending. Arizona had become fixed in this pattern during the New Deal years, taking in $342 million in federal funds while remitting only $16 million in taxes.

Bet that sounds familiar. It certainly should because the exact same thing is taking place today as the Red States continue in their role as “takers” rather than “makers.”

Something hardly ever acknowledged in the media is the Republican dedication to dirty tricks such as one of the “most important architects of the conservative movement,” Cliff White, who “wanted to emulate the Communists. He saw in their example the methods by which a small, disciplined minority, uninhibited by bourgeois scruples over fair play or tradition or truth, could defeat a majority and bend an organization to its will.”

Kabaservice does a great job of putting you into scene after scene throughout a rather tortured history and sometimes just part of his sentences serve to illustrate the terror that is the GOP. As in phrases like:

“…Goldwater was not personally a racist…”

“…disregard for truth or traditional standards of fair play…”

There are telling accounts of some of the GOP’s many odious figures of the recent past (some of whom are sadly still causing problems for the USA), including Mitch McConnell, Grover Norquist, Spiro Agnew, Jim DeMint, Pat Buchanan, Phyllis Schlafly, Tom DeLay, Robert Novak, Jerry Falwell, and, of course, Richard Nixon. As you can imagine, several dark and terrible tales about Tricky Dick appear in the book, but I rather like this gentle one:

John McClaughry, who had been an advisor to both George Romney and Charles Percy, recalled that when Richard Nixon had met with some of Percy’s fundraisers and supporters during the Illinois Senatorial campaign, “One of the guys asked him, ‘Mr. Nixon, what should Chuck Percy say about Vietnam?’ Nixon turned to him and very earnestly said, ‘Here are my four points,’ and he went through them from one to four. There was a short pause, and the guy asked, ‘Do you think that will really work?’ Nixon said, ‘No, but it will get you through the election.'”

Fooling the American public is the goal of every marketing team but the GOP carries it to new heights. Or perhaps that should be new depths. Take the reputation of Ronald Reagan, who was given the label of “tax cutter” when he was governor of California. He campaigned on a promise of no new taxes and then promptly raised taxes, “the largest tax hike ever put forward by any governor of any state, with a price tag of approximately one billion dollars.” He raised California’s taxes so much in his first year that he could “lower taxes” a little in each of the next seven years, all while the GOP marketing machine pounded the populace with the message that Ron was a “tax-cutter.”

More on the Ronald after he became our nation’s first Alzheimer’s president:

In real terms, defense spending increased by over one-third between 1981 and 1985, and totaled $2 trillion over Reagan’s eight years in office. The federal deficit tripled under Reagan, which the federal debt jumped from $900 billion to close to $3 trillion dollars. The United States went from being the world’s largest creditor to the world’s largest debtor.

Things never got much better as Kabaservice shows how “conservatives were skilled at politics but deficient at governing, and that a Republican Party without moderates was like a heavily muscled body without a head.”

In one of his last interviews as president, Bush called for a “compassionate” Republican Party and warned that the GOP must not become too rigidly and ideologically conservative: “It’s very important for our party not to narrow its focus, not to become so inward-looking that we drive people away,” the President told Fox News. “We shouldn’t have litmus tests as to whether or not you can be a Republican.” This message, however, carried little weight since it came from a party leader who had spent most of the previous eight years failing to take his own advice.

Page after page of the book reveals that the primary objective of the Republican Party is the dismantling of anything that works to the benefit of the vast majority of Americans. What they favor is a neo-Fascist concept of making the U.S. government simply an arm of big business, seeking “to turn the party into a sort of mechanism for delivering big-government benefits to its conservative base and backers.” Kabaservice also touches on Tom DeLay, Grover Norquist, and other disreputable figures as they “instituted the K Street Project, which essentially allowed business lobbies to write legislation to their liking….”

Origin of the Book’s Title

Conservatives used to accuse their moderate opponents of pursuing a “rule or ruin” policy in Republican politics, preferring defeat to a party controlled by conservatives. In fact, it was the conservatives who typically took a rule-or-ruin approach. Goldwater’s warning to moderates at the ’64 GOP national convention that they had to support “extremism in the defense of liberty” or leave the party was a classic expression of rule-or-ruin politics…. The pursuit of absolute rule gave the conservatives control of the Republican Party, but also destroyed the party’s ability to govern. The result was rule and ruin.

The book’s literary chapter titles were derived from “The Second Coming,” a poem by William Butler Yeats, and they seem spot-on in their lyrical depiction of dire consequences. Among the pithy headings: “The Blood-Dimmed Tide is Loosed,” “The Ceremony of Innocence is Drowned,” “The Rough Beast,” “Slouching Toward Bethlehem,” and “The Widening Gyre.” I looked up “gyre” to find that it means “an enormous current swirling just beneath the surface of the ocean.” After reading the book, one might think it means “pit of hell,” but I guess it all depends on your perspective.

Rule and Ruin is as fascinating as a roadside accident scene. Well-documented and well written, the manuscript even holds out the forlorn hope that it might be a map for the GOP to use in emerging from their rabbit hole. But it won’t happen because republicanism is a mental condition from which a significant percentage of the USA will never recover.

BOOK SUMMARY:
RULE AND RUIN: The Downfall of Moderation and the Destruction of the Republican Party, From Eisenhower to the Tea Party by Geoffrey Kabaservice. Oxford University Press, Hardcover, 504 pages, ISBN13: 9780199768400, $29.95.

This original article is Copr. © 2013 by John Scott G and originally published on eNewsChannels.com – all commercial and reprint rights reserved. No fee or other consideration was paid to the reviewer or this site by anyone.