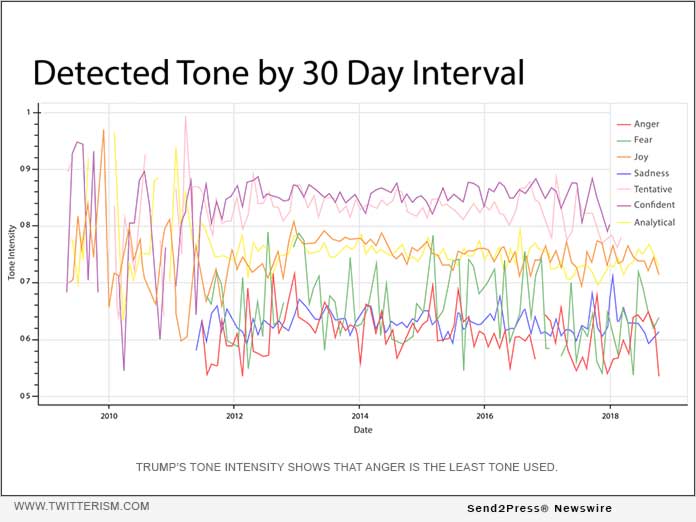 (WASHINGTON, D.C.) — NEWS: Dr. Singh, also known as the CampaignGuru®, has released a new website; WWW.TWITTERISM.COM which analyzes over 50,000+ of President Donald J. Trump’s “social media voice” from his tweets in real-time using AI. The website provides the Tone in which the tweets are delivered.

Dr. Singh, who formerly founded ElectionMall.com, is available to debunk the popular mainstream media narratives that Donald Trump’s tweets often come across as harsh or negative – and proves this via a quantitative scientific study.

* Dr. Singh identifies himself as a conservative turban-wearing Ph.D. holding a Master’s in Political Science, a Master of Science in Social Media, and one of the first in the academic world to achieve a Doctor of Philosophy degree specializing in social media and technology. http://www.ravisingh.com/mediakit

* Dr. Singh has already published a 450-page scientific research paper, for his dissertation from Ashford University, under the guidance, in part, of Dr. Sinan Aral, a professor in social media from Massachusetts Institute of Technology, Dr. Sinan Aral sat on his Ph.D. Dissertation Committee. Dr. Aral is a world authority on social media and fake news. https://search.proquest.com/openview/30286d466b8904f5004ab2d895bcdab5/1?pq-origsite=gscholar&cbl=18750&diss=y

* Dr. Singh’s new self-published book, “TWITTERISM: RAISE YOUR VOICE,” will be available on Amazon in November 2020 with a foreword written by Professor. Anthony Edward Schiappa, an expert on communication and rhetoric from Massachusetts Institute of Technology. https://vimeo.com/295769011

* Dr. Singh’s research for both his website and the book is based on a quantitative study and debunks several media outlet’s theories on Donald Trump’s tweets, including but not limited to Tone, his anger, and his overall follower engagement. Tucker Carlson had one big takeaway from the 2020 presidential debate: “Tone is everything” (Owen, 2020).

* This website is the first to measure the Tone of a world leader in real-time, and it explores the link between tone and follower engagement, creating a “Trump Follower Engagement Index.” The website should be of great use for any social media activist interested in developing followers. Dr. Singh has developed a patent-pending software that analyzes Donald Trump’s tweets in real-time by using Artificial Intelligence. For example, “The mood of Donald Trump is 76% confident right now.” Here is the link to the website http://www.Twitterism.com.

Dr. Ravneet (Ravi) Singh was born in the United States of America. He wears a turban as a requirement of the Sikh religion from northern India. Dr. Singh grew up in the cornfields of Illinois in the village of Prestbury. His favorite hero is Abraham Lincoln, the first Republican (GOP) President. He adopted at an early age the Lincoln notion of “perseverance.” At the age of 11, he met the first Sikh President of India and fell in love with politics.

His grandfather encouraged him to pursue a career in politics, while his father insisted on medicine. Dr. Singh was the first Sikh (with uncut hair and turban) to attend and eventually graduate from a USA Military Academy in American history. Due to the uniqueness of his case and harsh military rules, a legislation was introduced on his behalf to allow him to graduate with full USA military honors as a 2nd lieutenant (ARMY) while wearing a turban which was enacted under President Ronald Reagan’s administration. He then attended Valparaiso University, where he followed his passion and became Student Body President, Captain of NCAA Division 1 Golf Team, and graduated with a Bachelor of Science in Pre-Med and Political Science.

He then enrolled at Northwestern University and pursued a Master of Arts in American Political Science. Ravi Singh served as a public servant in Illinois State Government under Governor Jim Edgar’s administration, working for Lt. Governor Bob Kustra and State Treasurer Judy Baar Topinka, who he refers to as his “political mother.” During his time there, he learned the art of politics and campaigning, which inspired him to run as the first turban-wearing American, for the Illinois State Representative open seat in his hometown Aurora, Illinois, at the age of 25. He was one of the first to have a political website for his campaign and an online town hall, in 1997. He lost the campaign but won the Kane County nomination for the GOP (Republican Party), becoming the first Asian American to win the nomination. During his campaign, he started a website through which ElectionMall.com was born, and led to him being profiled in Business Week Magazine and USA Today, as the “CampaignGuru.”

ElectionMall Technologies Inc. main purpose was to help promote e-democracy and enable candidates, regardless of party affiliation, gender, or religious affiliation, to have access to technology tools for their political campaigns, regardless of their budget. Something Dr. Singh was persecuted for when he ran for State Representative. As CEO of ElectionMall.com, Ravi Singh became a Washington DC politician and maverick. Dr. Singh was a dot com pioneer who worked extremely hard to offer campaign technology in the early days of the “Digital Era.” The campaign and elections industry were full of “good old boys and American political consultants” who were not very welcoming to his Chicago hustle and turban identity. In 2010, the company co-branded with Microsoft Inc., developing the first cloud application for the political vertical, called Campaign Cloud powered by Microsoft. Ravi Singh received an infusion of investment and marketing dollars that launched for worldwide operations. Ravi Singh opened offices all over the world including, Ukraine, Malaysia, Mexico, Colombia, Brussels, and India, working on world leader’s campaigns like Juan Manuel Santos (Colombia), Enda Kenny (Ireland), Jose Sera (Brazil), and Anwar Ibrahim (Malaysia).

The company helped over 9 world leaders and various heads of state with their “digital campaign war rooms.” “Campaign Guru” his software committed to over 7000+ political websites worldwide. In 2014, the company faced charges of election fraud for two campaigns in San Diego, California. The company was forced to shut down operations in 2016 due to litigation cost, but the CEO, Ravi Singh, was personally charged with four federal felonies. He later appealed to the US 9th Appellate courts and eventually the US Supreme Court in 2020; however, the case did not get heard amidst the COVID-19 pandemic. In 2017, Ravi Singh went back to graduate school and pursued a Master of Science in Social Media Management from Liberty University, a Harvard Certificate in Digital Strategy, the prestigious digital marketing program from Duke University, and MIT Sloan Business School Executive ACE program; at the same time finishing his doctoral (Ph.D.) in Social Media and Technology from the University of the Rockies in Denver Colorado, now Ashford University. He successfully completed all these programs in less than three years and, in the process and has settled down in Miami, Florida.

Ravi Singh is a patriotic American who currently offers his social media expertise to business, brands, celebrities and is no longer able to participate in political campaigns without notifying the US government. The science behind his book, “Twitterism” will be published on Amazon in November 2020.

Willow.ai and TECVINE Offer the Next Generation of Artificial Intelligence (AI) Sep 29, 2020