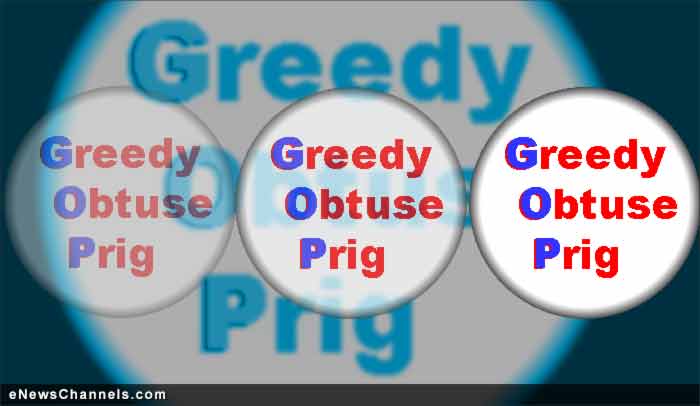 Republicans have long ceased to be the Grand Old Party, if that term ever applied to them, and therefore we are announcing a contest to re-brand republicans with an appropriate moniker.

We’ll mention your name in this column.

The new name for the republican party needs to accurately reflect them. 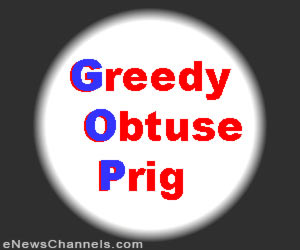 “Yeah, you know, it’s weird but they’re such huge jackasses that it gets confusing considering the symbol for the Democratic Party.”

True, but look, the new GOP name should–

All of these are accurate but the names need to also–

Enough already! Calm down and listen to all the requirements.

“I don’t see why we don’t just redefine GOP to something like Greedy Obstructionist Pricks.”

Quiet! Everybody please settle down. Thank you. Okay, look, just pointing out that they’re the party of stupid isn’t enough.

Well, you won’t win the contest with that. The name should also reflect the fact that they are harming the United States.

“Too long. How about GOPliban.”

“Did that one already.”

“A Whiter Shade of Fail.”

“Plays off their racism.”

“Yeah, but kinda one-note. What about their Fascism?”

“And their theocracy, homophobia, and plutocracy.”

“Almost missed that one.”

“Hey, that works: the Up Yours party.”

People, people, these are all good but they just don’t seem likely to really break through to the public at large. One of the big problems is that people who are so mentally warped that they would ever consider joining a racist party like the GOP are not going to learn a new name unless it’s really catchy.

“They aren’t going to learn anything new so you can stop right there.”

So that’s it? We’re just giving up?

“Look, everybody knows that the GOP is a treasonous, treacherous nest of vipers, but the media isn’t supposed to say so because the media is owned by corporations who support the GOP. They bought the GOP, they paid for it, they continue paying for it, and so we aren’t able to correctly label them.”