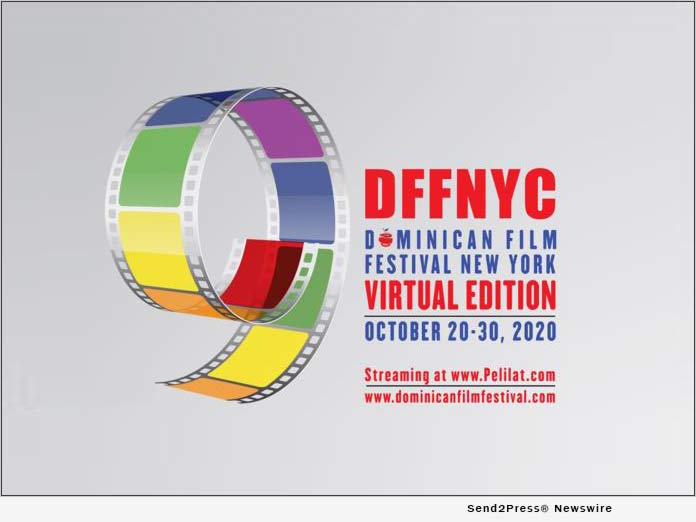 More than 70 films including World, US and NY premieres will screen virtually nationwide on October 20-30, 2020, including Canada and Puerto Rico

(NEW YORK CITY, N.Y.) — NEWS: The importance of maintaining healthy social distancing and stopping the spread of COVID-19, Dominican Film Festival in New York City (DFFNYC) will hold its ninth edition online, October 20-30, 2020. These challenging circumstances have not prevented the festival from continuing to be the largest and most impressive film festival outside the borders of the Dominican Republic.

DFFNYC official program will include a roster of 70 films and offering a program boasting a wide range of genres, from comedy to thriller and drama to romance, plus an homage to the classics and panel discussions with the top leaders of the film industry. All foreign language films are subtitled in English.

DFFNYC opens October 20 with the U.S. Premiere of “Cabarete,” a heartfelt coming of age story directed by first-time director, Ivan Bordas and closes October 30 with the world premiere of social drama “Carta Blanca” by Pedro Urrutia.

“We’re thrilled to support the 9th Annual Dominican Film Festival in New York, which is offering a virtual line-up of more than 70 films this year,” said Commissioner of the Mayor’s Office of Media and Entertainment Anne del Castillo. “The Dominican community comprises the largest Latino group in NYC, and this annual film festival continues to be an important celebration of established and up-and-coming talent within this community.”

Inspired by true events, “Cabarete” follows Somalia, a good-hearted teenage kite surfer from the Dominican Republic who convinces his idol to train him for an upcoming tournament in Cabarete. However, once in Cabarete, the town’s hedonistic nightlife quickly catches Somalia’s attention, and he finds himself having to choose between a life of pleasure and pursuing the athlete ambitions he once had. Director Ivan Bordas and some cast members will be present for a Q&A after the screening.

“DFFNYC is adapting to the ‘new normal’ by going digital while maintaining its essence, which is to bring the most emblematic stories that are made in and about the Dominican Republic and connecting the film experts and personalities from our island and its diaspora. Our message is clear: Stay safe, stay with us,” says Armando Guareño, Executive Director and Founder of DFFNYC.

The festival closes on Friday, October 30, with the world premiere of “Carta Blanca” directed by Pedro Urrutia. The film features performances by Pepe Sierra and Héctor Aníbal, and famous international actors Damián Alcázar, known for his role in Netflix’s “Narcos,” and Julio Bracho, popular for his characters El Chivo and El Chema.

Running October 20-30, 2020, under the slogan “Stay Safe, Stay with Us!”, #DFFNYCVirtual will screen virtually nationwide on October 20-30, 2020, including Canada and Puerto Rico. The festival will be streaming on http://www.pelilat.com/ (@streampelilat) a platform for Latin American cinema and available in different devices nationwide such as iPhone, AppleTV, Amazon, Firetv, Android, AndroidTV, Roku, and Chromecast.

As the premiere film festival in the North East of USA, #DFFNYCVIRTUAL line-up includes a tribute to much-acclaimed director Jose Pinky Pintor with five of his box office hits “Guilty,” “Mañana no te olvides,” “No hay mas remedio,” “Santo Domingo,” “Sol y Luna;” plus more than 35 World, U.S., and N.Y. premieres, as well as award-winning features, documentaries, animations and shorts from festivals around the world.

DFFNYC offers a rich and diverse program which includes the Official Competition, a powerful compilation of 12 narrative films dedicated to displaying the talents of the established directors alongside the new movement of groundbreaking filmmakers from the island. Special programs include “Point of Views”, a look-back at the films and directors that connected the viewer with the idiosyncrasy of daily life and Dominican history both inside and outside its borders. Among them are “Maria Montes”, “Flor de azucar”, “Adrift,” “Buscando al Zorro,” “A orilla del Mar,” “Loki 7,” “Melocotones,” “Musiquita por dentro.” The program “Reel Family Out,” presenting crowd pleasing films to enjoy with family are Los “Fabulosos Ma’ Mejores,” “Los Super,” “Mision Estrella.” Also included in the slate of screenings are programs dedicated to short films such as “Dominicans in the Diaspora,” which exhibits talented Dominican filmmakers who choose to tell their stories away from home for various reasons, and “Short Films – Big Stories,” a cinematic celebration and powerful demonstration of new and emerging filmmakers from the Dominican Republic and the diaspora competing for Best Short.

The centerpiece this year is “Malpaso,” directed by Hector Valdez. This is the story of Braulio, a young peasant, who after the passing of his grandfather has to look after Candido, his twin brother, secluded because of his albinism and who dreams of the return of their father.

One of the most important goals of DFFNYC is to offer remarkable discussions and panels with filmmakers and talents, as well as a rare chance for one-on-one conversations with directors, actors, and producers. Most of these, free of cost.

This year’s line-up of masterclasses and panels include:
* From Telenovelas to Films with Antony Alvarez
* Reel Dominican: The Dominican Actor Experience in Hollywood
* Master Class led by actor Juan Hernandez
* Film Festivals in Times of Pandemic
* Reel Women: Dominican Filmmakers in the Diaspora

INDIVIDUAL TICKETS: $15 (streaming available for day of the screening)

The 9th annual Dominican Film Festival in New York Virtual (DFFNYC) runs October 20-30, 2020 under the slogan: “Stay Safe, Stay with Us!.” The festival offers a platform for members of the Dominican film industry wherein both new and established filmmakers can promote their works to the public, establishing DFFNYC as a premier cultural event for the USA.

11th Annual RVA Environmental Film Festival for 2021 to be Presented Virtually, Free and Open to the Public Jan 19, 2021