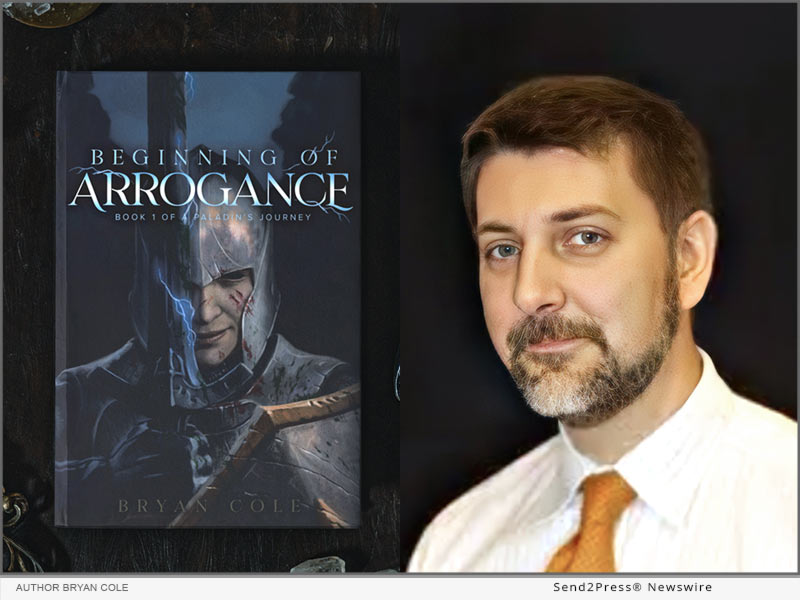 (TORONTO, Ontario) — NEWS: A fantastical story set in a world where paladins are heroes and the champions of the gods finds itself in the shadow of a looming threat. Their only choice? To rely on the services of an uneducated, incapable and stubborn paladin named Krell, whose adventures we follow in the fantasy novel “Beginning of Arrogance” (ISBN: 978-0228868668; Tellwell) by Bryan Cole.

A new release, “Beginning of Arrogance,” is set in a world where paladins are nothing but trouble and stories about paladins are everywhere. Paladins are notorious for upsetting the balance of power, to the detriment of any who don’t worship their deity. So when Krell is called to service by the capricious god of the seas and skies, ReckNor, those with wealth and power, can’t help but be concerned. ReckNor hasn’t called a paladin in years, and his nature is ever-changing and erratic.

The fact that Krell is also an uneducated nobody with a stubborn streak as wide as the sea turns their concerns into fear. All of which matters less than the threat clawing its way from the waves, ready to turn the ocean red with spilled blood….

“I rarely, if ever, see the implications of gods being active entities who seek out followers while in competition with other gods for followers,” says Cole. “I want to tell the story of how I would see when such a person is called to serve by a god in this fashion, one where the god takes an active role in trying to preserve the fate of his followers.”

The recently published fantasy is perfect for fans of “Lord of the Rings” and “Game of Thrones” as it has already received high praise from fantasy lovers, saying it is “…a promising start to a series that high-fantasy fans will enjoy” and had an ending that “kept me hanging on for more…”

BRYAN COLE is an avid reader and has loved the fantasy genre since he was a child. His love of stories of mighty knights, terrible dragons, and noble steeds has inspired him for decades.

Find out more at https://fatpaladin.ca/.

Note to editors: Review copies of “Beginning of Arrogance” are available upon request. Bryan is available for interviews and commentary. Contact info can be found on the author’s website, linked above.

'The Leafwing' by author Deborah Copeland, is a new YA fantasy novel making waves on the YA Fantasy charts Apr 7, 2021