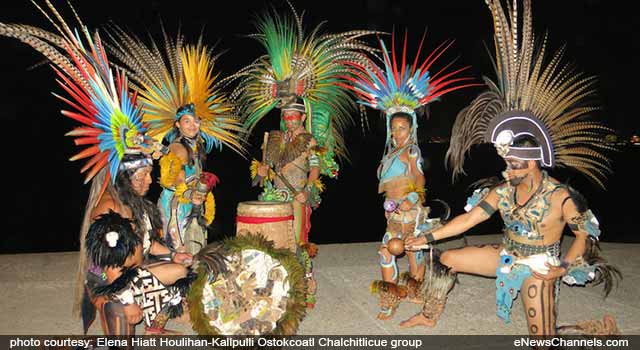 From the Big Apple to Mexico’s Puerto Vallarta, people are understanding the importance of giving gratitude to Mother Earth on the Solstice for all Her gifts, like the gentle rains and snows. And multi-cultural groups around the world are hosting an unprecedented number of ceremonies this June 21st. They also know that giving Her love and appreciation in solidarity is the most powerful way to heal our Earth Mother and spread Peace.

Manhattan is celebrating with yogathon on Time Square plus a concert, Seattle is hosting a bicycle race, so you may be able to find or create a celebration. If you live near a body of water, which could probably use a purifying, plus it is a sacred site, you may want to orchestrate a little gathering like ours in Vallarta, at the urging of the UN’s Sustainability officer. Ours will include prayers, songs and joyful friendship oceandance at Los Muertos Pier led by diverse spiritual leaders. They include Azteca Alexandro Perez, Father Saul of our Lady of Refuge Church, my co-host Cherokee Phil Kerr and his Mayan healer friends Raymundo Covarrubias Gonzalaz and Gayle Weatherly, an English healer. It will culminate at sunset with our making an offering of flowers to Mother Earth’s ocean.

Cover Photo (above) Caption: Center: Alexandro Perez (Tzinacan Tlamatini), as well as Father Saul of our Lady of Refuge Church, will be helping lead the June 21 Solstice ceremony at Los Muertos Pier at 7:30 pm on Sunday to anchor in Divine Feminine Energy and the Summer of Peace. Photo courtesy: Elena Hiatt Houlihan-Kallpulli Ostokcoatl Chalchitlicue group.

The SHIFT Network also coincidentally launched their Summer of Peace June 13 to Sept 13 in collaboration with the Charter of Compassion with ongoing inspiration by the world’s wisdom keepers on http://summerofpeace.net/ They also have a brilliant multi-cultural plan to joyfully make this the decade that brings in the new dawn. http://theshiftnetwork.com/vision2020. When I told Gayle that we needed to host a Solstice ceremony in solidarity with them and my ski student, Lakota Chief Arvol Lookinghorse’s 20th World Peace and Prayer Day/ Honoring Sacred Sites DayWorld … in Ashland, Oregon, June 18-21st, she got really excited. She said, “Let me show you something.” A few moments later I saw these photos from their recent trip to Oregon’s sacred Crater Lake.

Said Gayle, “Sue (Kennedy) shot this beautiful sunset, but I didn’t see this phenomena until we got back to Vallarta two months later.” Her IPAD showed even more distinctly her explanation of “The pink rose circle and ray of the divine feminine energy has started coming back, representing Mother Earth, Mother Mary, Mary Magdelaine, our Lady of Guadeloupe -all in one.”

Gayle added, “The diamond is the Christ Consciousness energy – the divine masculine and the divine feminine energy, which we all have, in balance. These energies started being anchored into pristine places like Crater Lake in 2013, and can be greatly enhanced on this Solstice with our help. It results in hearts that are open and people who stand up and do something when they see a suffering person, animal, ocean or planet, like Jesus exemplified, and many women and more and more men embody.” 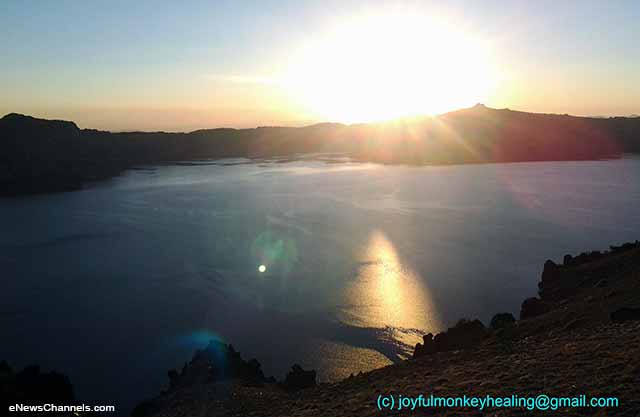 ”See this blue light…it’s Archangel Michael helping protect this anchoring, along with Archangel Raphael, the green light.” I said, “Wow you can see their great wings. You don’t have to take this all on faith.”

How perfect that we are celebrating our Earth Mother on the Solstice at the same time as launching this summer of peace. I told Gayle, if you stop and think, how many wars have women ever started? When the Goddess Era succumbed to the Patriarchal Era and the churches were only led by men, isn’t that when religious wars took hold? And when eight million of our European female ancestors who healed or guided others working with Nature, like Joan of Arc, were taken out of our gene pool in the Inquisition, respect and love for Mother Earth gave way to Her resources becoming a commodity. The Indigenous and the Egyptians, who had strict laws against fouling the water and land, held on to this yin yang balance, and have the longest records of sustainability.

Scientists say that war is also the biggest cause of global warming and a major cause of poverty. The most male-female balanced peace-loving country is Sweden, and they have the highest humane standard of living and universal healthcare.

A female wisdomkeeper said that this chaos happened so humanity could learn this lesson about balance and now together rise. Giving gratitude and attending these divinely choreographed events are powerful ways to restore that balance and evolve onto the high road to enjoying more heaven on Earth! Here are some inspiring multi-cultural songs to Mother Earth since love songs are the key to our Native American Elders-led snowdances that have helped ski areas end droughts starting with the 1960 Squaw Valley Olympics at Walt Disney’s request. IMAGINE: Earthrising in 2015 Through Love Songs!

We invited Father Saul at the suggestion of my Vallarta Saludable co-founder Carlos Von Hauske, and a 14 year old parishioner who told me she hoped that all the Churches would work with the Indigenous to help heal Mother Earth for all us children. Praying together is not entirely new for Mexicans. We will be honoring Mazatl, whom I recognized as being a revered local Azteca Elder (in the bread section at Wal-Mart) for likely helping inspire this after dancing for Pope John-Paul II 18 years ago. Two years later, at the turn of the Millennium, the pontiff apologized to the Indigenous of the Americas and Women, and then became a Saint.

Click here to learn more about Pope Francis’s climate encyclical and ask the faith leaders in your community to join the call for climate action. – “because it is a massive threat to our planet and its people.”

In February, Gayle and Phil were part of a group who helped lead our whale protection ceremony at the pier for UN’s Interfaith Harmony Week’s Charter for Compassion, guided by Cherokee PhD, Olivia Ellis. Our energy attracted 10 whales and their babies that jumped for joy and stayed in the purified waters around the pier for an unprecedented three days to the delight of the crowds, said Captain Juan Santana. Mexico’s ‘UN Compassion Week’ Oceandance inspires Whale … Miracle! https://www.youtube.com/watch?v=uaaby0o5-CI&feature=youtu.be

So on the Solstice we will also give gratitude for that phenomena and the University of Guadalajara’s interest in studying this Ancient Wisdom of the tribes, thanks to Terra Noble’s Claudio Rincon since the consensus of the UN’s 192 countries is it is key to regenerating our oceans and Earth in combination with green technology. So with the help of Arturo Ortega, PV’s guru of festivals, and Ray Dion of PromovisionPV, Indigevision (VS) is also documenting this ceremony.

If you can’t join a Solstice celebration you can still make a difference through some kind of an offering or a prayer to Mother Earth, remembering as Jesus said, “Where two or more are gathered,” and that includes on phones. Or give a hand to those in the front lines, like our team at NAOTF.org. In so doing the Earth and Her weather around you is also blessed according to the laws of karma!

Article is Copr. © 2015 by Suzy Chaffee and originally published on eNewsChannels.com – all commercial and reprint rights reserved. Opinions are those of the author and may not reflect the opinion or policy of this site or its publisher. Content has not been edited beyond simple typo checks in order to retain the author’s unique voice.

READ MORE from Suzy at: https://enewschannels.com/author/suzy/ .