Home ARTICLES and Columns GOP Extreme: Book Review of 'It's Even Worse than it Looks' by Thomas E. Mann and Norman J. Ornstein
SHARE
Facebook
Twitter

REVIEW: Want to know how and why Washington is such a mess? Two respected analysts of governmental policy, one from the progressive Brookings Institution and the other from the troglodyte American Enterprise Institute, demonstrate that the GOP is at fault.

When two political scholars collaborate on a book, it’s not exactly news. But when one of them is from the respected Brookings Institution and the other hangs out amongst the neo-Fascist members of the American Enterprise Institute, their partnership not only becomes news it also raises eyebrows.

Fortunately for all of us, even the guy from the greedwhore organization has noticed that the gridlock, nonsense, and obstructionism in D.C. are the responsibility of the GOP. It’s about time such an acknowledgement was disseminated in print; it should be shouted from the rooftops.

Take the bipartisan Senate effort to create a deficit-reduction task force. Speaking out on behalf of the resolution were such republicans as John McCain and Mitch McConnell, yet look at their actions when it came to a final vote:

Among those who voted to sustain the filibuster and kill the resolution were Mitch McConnell and John McCain. McCain was joined in opposition by six other original cosponsors, all Republicans. Never before have cosponsors of a major bill conspired to kill their own idea, in an almost Alice-in-Wonderland fashion. Why did they do so? Because President Barack Obama was for it, and its passage might gain him political credit. 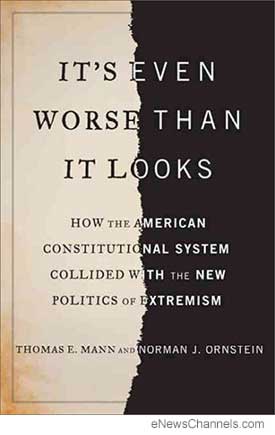 Mere partisan divide cannot be the whole reason for this. Racism is obviously involved. “Republicans greeted the new president with a unified strategy of opposing, obstructing, discrediting, and nullifying every one of his important initiatives.”

What followed was an appalling spectacle of hostage taking–most importantly, the debt ceiling crisis–that threatened a government shutdown and public default, led to a downgrading of the country’s credit, and blocked constructive action to nurture an economic recovery or deal with looming problems of deficits and debt.

The domestic political terrorism of the GOP is disturbing and disgusting but reading such clearly delineated prose describing it is refreshing, as in this lovely paragraph:

…however awkward it may be for the traditional press and nonpartisan analysts to acknowledge, one of the two major parties, the Republican Party, has become an insurgent outlier–ideologically extreme; contemptuous of the inherited social and economic policy regime; scornful of compromise; unpersuaded by conventional understanding of facts, evidence, and science; and dismissive of the legitimacy of its political opposition. When one party moves this far from the center of American politics, it is extremely difficult to enact policies responsive to the country’s most pressing challenges.

Brilliant and much-needed observations — and what I’ve quoted so far is just in the book’s Introduction!

The book is equally divided between two sections, the first half called The Problem and the second half entitled What to Do About It. Time and time again in part one, GOP senators and representatives are shown to be concerned with what they call the republican brand rather than with the needs of the American people.  “Balancing interests, conducting meaningful deliberation and debate, respecting adversaries and, most of all, focusing on problem solving all took a backseat to the Republicans’ take-it-or-leave-it bargaining positions.”

Quite a lot of blame is laid at the soiled clay feet of Newt Gingrich, which is a bit unfair. True, he is the architect of today’s dystopian and delegitimized House of Representatives, but the rest of the GOP went along with it and even abetted it. And the media failed to expose it to the American people (and are not doing much about it even as you read this).

It is traditional that those in the American media intent on showing their lack of bias frequently report to their viewers and readers that both sides are equally guilty of partisan misbehavior. Journalistic traditions notwithstanding, reality is very different. The center of gravity within the Republican Party has shifted sharply to the right. Its legendary moderate legislators in the House and Senate are virtually extinct.

While the media screws up, Mann and Ornstein are able to step up: “Gingrich deserves a dubious kind of credit for many of the elements that have produced the current state of politics,” including: concerted efforts to harm the opposition party president, undermining public faith in Congress, emphasizing electoral goals instead of genuine policy issues, embracing confrontation and obstruction for their own sake, and helping create the modern state of permanent campaigning that further erodes democracy.

Got your attention now! Unfortunately, it’s in reference to something that is very bad news for the nation: “American elections are awash in money, politicians devote an inordinate amount of their time dialing for dollars, and campaign fund-raising is now considered a normal part of the lobbying process.” Trading votes for campaign cash is a sad fact of life in Washington and throughout politics. “Lawmakers rise to positions of committee and party leadership not based on their talents or expertise but on their prowess at shaking down big money donors.” Or large numbers of small money donors.

There are quite a few anger-inducing paragraphs devoted to Citizens United v. Federal Election Commission, the disastrous 5-4 Supreme Court decision that should be grounds for accusations of anti-Americanism aimed at five members of that formerly august body. Well, the authors are too reserved to join me in that assertion but at least they note that Citizens United “has opened the floodgates to even more money in politics, and more corruption.”

Karl Rove, one of the most odious figures in current politics, has several pages in the “problem” half of the book, along with other examples of humanis turdicanus like Ed Gillespie, Jack Abramoff, Norm Coleman, the Clueless Prexy (G.H.W. Bush), the Puppet Prexy (“W”), Dick Cheney, John Boehner, John Mica, Mitch McConnell, and the completely disgusting Koch brothers. And that lamentable litany continues on and on, unfortunately.

Individually and collectively, the republicans’ actions border on treason while the vast majority of Americans let them get away with it (a large part of the problem that is barely mentioned in the manuscript). And then, they repeat themselves (possibly because they know the reading level of most republicans) —

Today’s Republican Party, as we noted at the beginning of the book, is an insurgent outlier. It has become ideologically extreme; contemptuous of the inherited social and economic policy regime; scornful of compromise; unpersuaded by conventional understanding of facts, evidence, and science; and dismissive of the legitimacy of its political opposition, all but declaring war on the government.

Kill a Republican for Christ

Well, no, that’s not one of their recommendations, but “Bringing the Republican Party back into the mainstream of American politics” is one of the tenets of the book, and that might require more than mere persuasion.

The authors begin Part Two with a list of things to avoid, devoting 24 pages to their explanations of why these chestnuts (among them: third parties, a constitutional amendment to balance the budget, term limits) will not work, or at least not the way we want.

Among the ideas they recommend for immediate adoption, or at least for serious consideration, are: expanding the electorate, campaign finance overhaul, redistricting reform, and removing lobbyists’ death-grip on our elected officials. Every decent American can agree with those principles (which, of course, leaves out republicans, hence my frivolous subhead above) but it is the explanations of the ideas that make for terrific reading.

Mann and Ornstein do offer a few words of optimism: “…as voter disgust with dysfunctional politics grows in intensity, the market for ideas like public financing or even mandatory attendance at the polls will also grow.” Here’s hoping they’re correct, but in a nation of so many racists and morons (60 million of ’em voted for Romney) it isn’t clear if the public is up to the task of correcting the problems that the GOP have forced upon us.

…Republicans in office have driven both the widening of the ideological gap between the parties and the strategic hyperpartisanship on such crucial issues as financial stabilization, economic recovery, deficits and debt, health-are reform, and climate change. In the presidential campaign and in Congress, their leaders have embraced fanciful policies on taxes and spending and kowtowed to the most strident voices within their party.

And while there is much terrific stuff like that in these pages, the guys don’t get everything right. For example, the book mistakenly refers to earned income as “entitlements,” a common Frank Luntz-type propaganda technique. Perhaps equally bad, at one point the authors put “tea party” and “principles” in the same sentence. Yipes! Fortunately these errors are few.

At 50,000 words, this is either a slender book or a lengthy essay, and some of the language can get a tad, well, academic:

In turn, the increasing partisan homogeneity of political jurisdictions, exacerbated in legislative districts by redistricting practices, diminished electoral competition and reinforced the polarizing dynamic between political elites and voters.

But don’t be put off by the occasional thesis-style sentence or the relative brevity of the piece. There are important, even crucial, points being made here. If there are any decent people left in the republican party (apparently a very big If), they should read these chapters and make them their battle cry; for everyone else it is a refreshing change to see truth being written by people who represent both the reality-based and the fact-free Faux News side of things.

This original book review is Copy. © by John Scott G and originally published on eNewsChannels.com – all commercial and reprint rights reserved. Disclosure: no fee or any other type of consideration was paid/given to the author of this review of this site in exchange for the review published above.