COLUMN: Heart-warming steps toward realizing a dream of creating a Native American Olympic Team were made at Oklahoma’s City’s “American Indian Sovereignty Symposium” on June 4, 2009. At the sports panel Bill and Jack Thorpe, sons of the late Jim Thorpe, voted the “Greatest Athlete in Modern Times,” joined forces and then offered critical resources to help Indian youth vie for the 2012 London and 2014 Russian Olympics. 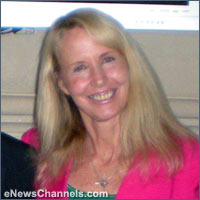 It was apparent at the meeting that the Thorpes carry the hopes and dreams of Indian Country, and Jack and Bill’s unifying leadership was the buzz of the event.

“When like-minded people get together, there is nothing we can’t do,” said Jack, former principal Chief of the Sac & Fox. With the help of ‘big brother’ Bill, Jack pioneered the founding of 130 Native Boys and Girls Clubs, “to help develop Indian sports stars like we had 100 years ago.”

The panel was again organized by Tulsa’s Joe Henson, Olympic bronze medalist wrestler and former AAU President, who also served on the US Olympic Committee with me. He describes giving underserved tribal youth an Olympic break as, “My Church.”

The roomful of tribal and sports leaders gave unanimous support behind Joe’s offering to help put Indian grassroots on a database, like the AAU, to streamline sports opportunities, as well as supporting elite summer and winter athletes in national and international competitons, including the Olympics. That has since inspired Jack and Bill to offer an office at the Jim Thorpe Association in Oklahoma City to house the newly forming Native American Sports Foundation (NASF).

“By giving Indian youth more exciting sports opportunities from grassroots to elite, our Olympic stars can bring pride to their families, tribes, and all our Nations,” said Charles Lone Chief (Pawnee Vice President). “They can make it cool for the rest,” added the running coach, who could have been an Olympic contender, like a number of today’s tribal leaders, if they had gotten a break in their prime.

Now that casinos have taken care of the critical basics: Running water, electricity, housing and economic development, tribal leaders are looking at this exciting Olympic opportunity as a cost-effective way to turn around their obesity, diabetes, alcohol, drug, crime and suicide epidemics – all 2x worse than mainstream – by making them look boring to the kids by comparison.

“I could be making licence plates, breaking rocks, or be in jail, if not for wrestling,” said Ken Bellmard (Kaw), another fit tribal role model, who serves on the USA Judo board including at the China Olympics.

“Wrestling opened doors for me to get a scholarship, travel the world, make lifetime friends, and get a law degree.” As council to a number of Oklahoma tribes, he agreed that restoring the health and spirit of Indian Country could easily be funded by each casino sponsor dedicating one gaming machine to toward this Olympic effort, along with other sources.

NASF has so far identified over 35 winter and summer ‘Olympic Hopefuls,’ including tennis and tai quan do talent that also surfaced during the day long panel. But for lack of a unified tribal support system, Brandon Running and Alvina Begay (Navajo), who qualified for the 2008 China Olympic Marathon Trials, just missed the US Olympic Track Team to China.

Basketball is Indian Country’s most beloved sport. Thanks to a break from my friend Kiki Vandeweighe (Blackfeet), as manager of the Denver Nuggets, Warlance Foster (Lakota-Navajo) got a tryout and then made the Netherlands Team, where his fans wore buckskins. He and Matt Vale (Navajo) then made the ABA “Gallup Outlaws.” They are now working on organizing games between top European and Mexican Teams with an All Star Native American Team. This would bostler business of Casino hosts while giving themselves and other hot Indian collegiate talent valuable experience leading to London. 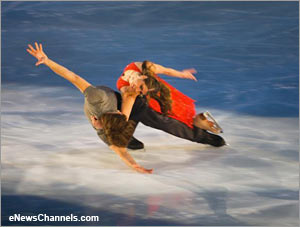 Only Native American woman to ever compete in the Modern Games, Naomi Lang (Karuk), 2002 Olympic ice dancer, who recently starred in NBC Special “Latin on Ice,” filmed at the Seminole’s Hard Rock Cafe in Florida. Her Russian partner is Peter Tchernyshev.

Only two Native Americans have competed in the Olympics in this Millennium. Since her standing ovation at Utah 2002, ice dancer Naomi Lang (Karuk) has starred in NBC Specials like “Latin on Ice,” at the Seminole’s Hard Rock Cafe. Naomi is the only Native woman to ever compete in the 100 year old Modern Games. Since girls/moms get their whole families healthy, expanding exciting sports opportunities, plus enlightened diet, can save Indian Country billions in healthcare and welfare, as sports makes you want to eat healthier, like using stevia.

Stevia is a healthy natural, zero carb, sweetener, discovered by the tribes of the Americas. NuNaturals.com gives 1% of sales of NuStevia, the best-tasting brand featured on GMA, to help support our Olympic effort.

Teachers, like the Taos Pueblo, also use snowboarding ops to inspire model behavior and grades.

Joe Tompkins, charismatic Paraolympic ski racing veteran of Utah and Torino, hailing from the Alaskan Tlinkets, is the only Native male who has qualified for Vancouver’s 2010 Games. Yet hundreds of these bravehearts are training every day, with families sacrificing so much in hopes of bringing pride to their “People” at the London Summer and Russian Winter Games.

The SnowSports Industries of America (SIA) is doing its part having donated $.6 million in gear to tribes, along with ski areas in 10 states sharing over a million in opportunities over 13 years. “We want to help create a generation of Native American Olympians,” said SIA President David Ingimie.

This season, we are working on a win-win plan with ski areas to expand our “Future Olympians Ski & Snowboard Programs.” Olympian Billy Kidd’s (Abenaki), who pioneered their Ute one, now has three Native National Champions under his wing at their Steamboat Winter Sports Club, which has produced 65 Olympians.

“To elevate all Indian talent, we want to assist grassroots program, like Native Boys & Girls Clubs, and organize cutting-edge national coaches clinics and national championships in the strongest sports. With more opportunities and strategic lobbying, hundreds of Indian youth could have a chance to compete on a sovereign Native Amarcan Olympic Team, or at least a real chance to make a US Olympic Team,” said Joe’s son, Josh Henson. This All American Harvard Wrestler at Harvard, now council to the World Olympians Association, was a ‘poster dad’ at the Symposium, proudly showing pictures of his and wife Melissa’s nine month old Cherokee Olympic Hopeful.

In closing Jack said, “The key to this plan success is community support.” Bill then added, half in classic Indian humor, “And we don’t take no for an answer. Either lead, follow or get out of the way.” The Thorpes also give all Indian kids added pride and confidence that they have remarkable sports genes.

Oklahoma Appeals Court Judge Keith Rapp, urged action, not simply words, which elicited a chain reaction of commitments, led by the Thorpes. This synergistic team effort, especially with the guidance of these Olympic insiders and rising sons, the Jim Thorpe Spirit rides again!