DENVER, Colo. — John A. Casper has been named president and chief operating officer of Van Gilder Insurance Corporation, the largest privately owned insurance brokerage firm based in Denver. “John is joining us during what is, perhaps, the most exciting time in our firm’s 102-year history,” said Michael Van Gilder, chief executive officer of the company.

“We call it the Van Gilder Renaissance, and John’s abilities as a leader in both the community and in our profession, bring us an unprecedented level of expertise and vision during this amazing period of growth for our company.”

John Casper comes to Van Gilder after eleven years at St. Paul Travelers, where he served most recently as regional president, overseeing the six states and three branch offices that comprise that company’s Southwestern Region. He is widely credited with significantly increasing the region’s profitability and growth during his tenure at the firm. 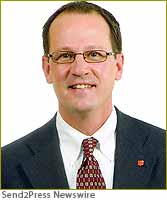 Mr. Casper has worked in the insurance business for more than twenty-one years and is the recipient of numerous awards for his leadership and performance. He holds a Bachelor of Science degree from Arizona State University and currently serves on the boards of both the Western Guaranty Fund and Junior Achievement.

Founded in Denver in 1905, Van Gilder has been an institution in the city and the region, continually, for more than one hundred years. Late last year, it was announced the company was undertaking a renaissance of its business, both internally and externally. “We are very focused on becoming Colorado’s most trusted risk consultancy,” said Michael Van Gilder, the fourth generation of the Van Gilder family to head the firm.

“To do so, we’re re-examining and improving every aspect of our brand to create a customer experience unmatched in our industry. John’s proven ability to achieve similar dramatic levels of change make him the ideal candidate to lead our firm forward,” he continued.

“I simply could not be more pleased,” said Mr. Casper. “Having grown up in this business as a fan of the Van Gilder family and all they’ve accomplished with their firm, it gives me tremendous pleasure to have been chosen to work alongside Michael Van Gilder now, as the company begins its second century in business.”

About Van Gilder
Van Gilder Insurance Corporation was founded in Denver 1905 and is currently the largest privately owned insurance brokerage firm based in the city. From offices in Denver, Colorado Springs, Dallas, and Kansas City, Missouri, Van Gilder provides a wide spectrum of risk consultation and insurance services for businesses, individuals, and families through its staff of more than 275 dedicated risk management professionals.