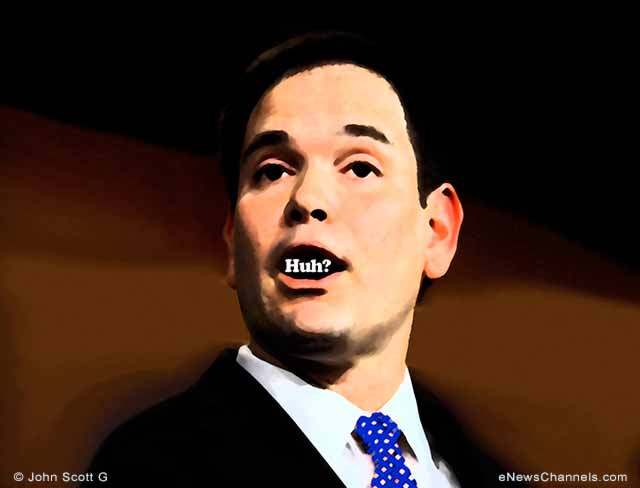 Professional know-nothing Marco Rubio is attractive to people of impaired cognitive reasoning but everyone else recognizes he is unfit for public office. In a surprising turn of events, teachers across America offer helpful advice on behalf of his joke candidacy for president.

When it comes to the presidential aspirations of Marco Rubio, there are three different types of reactions:

First: Rubio enjoys some support from millionaires and billionaires seeking ever-larger undeserved tax breaks as well as from powerful corporations looking for fewer regulations so they can further foul the air you breathe and the water you drink. This might be called the greedwhore vote. While Jeb Bush seems to have a lot of it locked up, plutocrats will cut checks for any rightwing nutjob who runs for political office.

Second: There is adoration from people of limited intellectual ability. “He’s, like, a regular person who ain’t so high ‘n’ flighty,” said Judi Lumpooh of Dampbottom, Florida, the moron-majority state where Rubio is a Senator. “It just feels gooder to hear from someone who’s, y’know, one of us regular folks.”

The waves of derision and ridicule for Rubio have elicited a sympathetic response from an unexpected source: the nation’s schoolteachers. Their reaction seems very odd because Republican candidates do not support teachers. In fact, Republicans do not support education in general, especially science, math, history, English, logic, reasoning, etc. However, the tutoring impulse does demonstrate what kindhearted people teachers are. (I confess to a certain amount of joy in concluding that sentence with a preposition.)

In an astonishing turn of events, educators from around the country are sending words of advice and guidance to the campaign staff of “poor little empty M-P.” Herewith a brief sampling of teacher comments regarding Marco Rubio, King of the Marks and Rubes:

* Young Marco needs to be encouraged to avoid telling tall tales. While he demonstrates admirable creativity in claiming his parents fled from Fidel Castro’s communist regime in Cuba, it would be better to stick to the facts which show that his family departed in 1956 when Batista ruled the island and Castro was still in Mexico.

* Marco could benefit from learning the value of consistency. His insistence on backing multiple and contradictory immigration policies indicates an inability to focus on a problem. I’m sure that more effort in this area will show improved results in a few short years!

* Marco is to be commended on always appearing so very neat and tidy. What a bright and shining example to other youngsters! Obviously he has put in a lot of energy into his appearance. One area where a bit more work would be helpful is in his understanding of science. While he formerly backed limiting greenhouse gas emissions and urged that offshore drilling be proven environmentally safe, his recent denial of these positions is alarming to students who are more concerned with facts.

* Marco would benefit from learning self-control skills to refrain from copying others, especially the slow-learners (his “Drill Here, Drill Now” proposal was Palin-esque to say the least).

* In the area of religious belief, schools cannot take a stand. That being said, little Marco should probably refrain from claiming to be Catholic while simultaneously attending a Baptist-affiliated megachurch and denying his Mormon upbringing.

* Marco has displayed maturity in ignoring the taunts and name-calling of some of his classmates. For example, when one of Mitt Romney’s friends called Marco “a wheeling and dealing Miami lobbyist and politician, always trying to scam the system for his personal benefit,” Marco shrugged it off.

* Kudos to little Marco for refraining from his usual whining! When one of Charlie Crist’s friends said that Marco was “a tax raising Miami lobbyist-politician who has used public office for personal gain and political donations as a personal slush fund,” Marco did not bother to reply but simply moved on. What a grown-up attitude he sometimes displays!

* We must give Marco an “E” for Effort in trying so very hard to grasp concepts that are clearly beyond his comprehension. When Marco claimed that the US approach to ISIS involves trying not to upset Iran, it was naturally embarrassing to all concerned parties. And although John Kerry spoke slowly and distinctly in correcting Marco’s misconceptions, it remains to be seen if the boy allowed any of the information to sink in.

* The whole class always enjoys the fantastic adventures told by little Marco. He is so pleasant and earnest when he makes up his stories! However, he needs to be encouraged to more often stick to reality and accept responsibility for his errors and miscommunication on the numerous occasions when he is “found out.”

There are many ways that Marco Rubio is cringe-worthy as a person and fringe-worthy as a candidate for anything with more responsibility than Hall Monitor. In summing up the many objections to him, it seems best to paraphrase a line that James Carville first used against Bush The Oblivious in 1992. Back then, the line was: “It’s the economy, stupid.” For Marco Rubio, the line is: “It’s the stupid, stupid.”