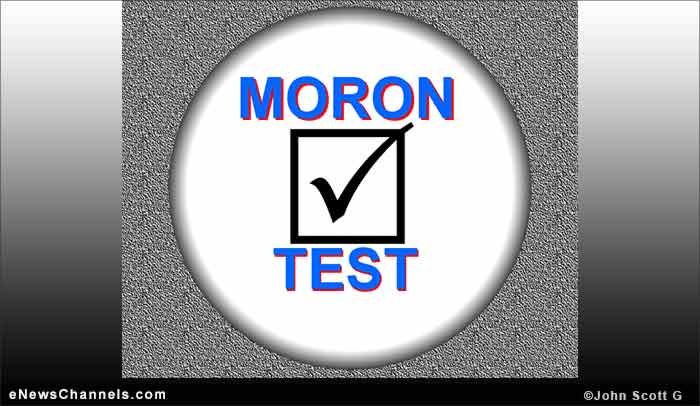 There are many reasons people vote Republican besides stupidity and racism. With so much doubt and confusion swirling around “the moron party,” we thought it was a good time to provide this little test.

You can try this quick and easy examination for yourself as well as give a copy to close family members, friends, coworkers, neighbors, and that weird uncle who always ruins your family gatherings by spouting rightwing nutjob nonsense he heard on “the Fox News.” Most importantly, this experiment will help you find out if you, too, are ready to get in touch with your inner douchebag.

1. When you are confronted with a fact, you:

a) Try to learn from it.

b) Apply it to what you already know.

2. You get information about the outside world from:

a) Newspapers not published by Rupert Murdoch.

b) Magazines like Mother Jones, In These Times, and The Nation.

c) Fictional sources such as Faux News and the Sludge Report as well as phony think tanks such as Heretic Foundation and The Kay-Toe Institute.

3. When an unregulated corporation like Duke Energy poisons the drinking water of an entire state, your response is:

b) File criminal charges against the corporation, its officers, and the colluding governor who has financial ties to the offending company. Oh, and put strong safeguards in place immediately.

c) Yammer about how corporations are being shackled, free enterprise is under threat, and trees cause pollution (even if they are the right height).

4. Your reaction to people who are gay, lesbian, bisexual, or transgender is:

a) Live and let live.

b) Tolerant is as tolerant does.

5. Your definition of “women” includes the following:

a) The female gender of humankind.

b) Fifty-one percent of the population in America.

6. When you see someone of another nation, your reaction is:

a) There’s a fellow human being.

b) There’s a person whose culture may have something to offer us.

c) Be suspicious of “the other” because ya gotta watch out for those strange “feriners.”

7. The rise of plutocracy in America is alarming because:

a) Wealth inequality is harmful to democracy.

b) The concentration of wealth poses a threat to society.

c) If some guy is rich we should listen to him and maybe even give him a TV show.

8. When it comes to theocracy…

a) Faith is a personal choice; leave the government out of it.

b) Religious freedom is a cornerstone of America.

c) I love Jebus and people who don’t will go to hell!

a) It will be great when we can advance to a post-racial society.

b) People are people.

c) It’s a terrible infringement on us poor downtrodden white people to say we can no longer publically call a spade a spade, if you get my drift.

a) You are alarmed at the parallels between the mind-set of people in the Third Reich and those in the GOP.

b) You want to fight against it in the world and hope to eradicate it in the US.

c) You say you absolutely deplore Fascism but you worship authority, conformity, directives, racial purity, closed borders, war, government subordinate to industry, and the freedom to practice any religion as long as it’s Christianity.

11. A great achievement of the USA is:

a) The Bill of Rights.

c) Naming a lot of high schools after Ronald Reagan.

12. Since one of the basic ideals of the United States of America is justice, naturally you feel that people should have:

a) Clean air and water.

13. When it comes to the allocation of public funds…

a) You like roads, schools, libraries, and the electrical grid.

b) You like sanitation, food inspections, and safe medication.

c) You like giving tax breaks to corporations and to individuals making more than a quarter-million dollars a year.

14. Since the GOP is so detrimental to the progress of the USA, what is holding up the elimination of that horrible organization?

a) The GOP moron base.

b) The RWNJ billionaires funding the GOP.

c) Benghazi! IRS! Socialized medicine! They’re coming to take our guns! We must starve the children of the poor! Only moochers want affordable health care!

15. To obtain information from other than corporate-sponsored media, you read:

Any combination of (a) or (b) answers: congratulations, you are a normal person. Any (c) answers: you should be ashamed at being a rightwing nutjob idiotic scum sucking pig. (But we mean that in the nicest possible way!)