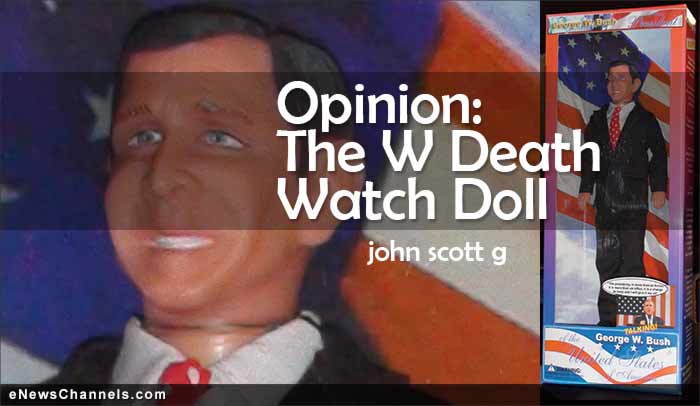 Note to the Secret Service: This column in no way calls for any harm to come to the 43rd POTUS. It’s just that there is a monetary gain that will accrue to some of us upon his demise and so, well, we’re interested in his health, that’s all.

A long time ago on a planet very similar to ours, two friends had a practice of giving each other bad Christmas presents. It was a contest of sorts in which the winner was whoever could find the most outrageously awful gift. One of these twisted souls was me. The other person will not be held up to public ridicule here. (You’re entirely welcome, Pete.)

So one year he would open a carelessly wrapped offering of a recording featuring “24 Solid Gold Polka Classics” and I’d open an equally casually swathed book — which sounds like it might be an okay gift except it would turn out to be an autographed copy of “Ego Ain’t the Half of My Awesome Greatness!” by some Hollywood hack. Or something equally alarming.

He usually won these contests, and one year he totally outdid himself to become the CBCGG (Champion Bad Christmas Gift Giver) and now my storage unit is the repository of something besides guitar amplifiers and bric-a-brac inherited from my mom, something weird, twisted and evil, something eerie and unsettling, something called the George W. Bush Talking Doll.

We will pause for a moment to allow you the fun of blurting out questions that immediately come to mind. “How is a talking W doll any different from the real thing?” Or “You have got to be freaking kidding me.” Or “You’re making that up.” Or “That gives new meaning to the term ‘gag gift’.”

Sorry to dishearten anyone but the George W. Bush Talking Doll is for real. It is a hideously ugly, 12-inch high inaction figure in suit-and-tie with battery compartment and prerecorded tidbits of auditory blather. As it proclaims on the side of the box, “George W. Bush delivers actual speech sound-bites.” They were referring to the doll but that line fits his entire speechifying output for the 2,920 days the country suffered under his “presdensity” as he might put it. The doll purportedly delivers seventeen recorded statements. I haven’t the stomach to actually play the thing so I don’t really know exactly what kind of audio garbage the doll emits. But in order to fully appreciate some of the rancid flavor of this thing, let’s just consider the Bushisms that are printed on the side of the package:

1. “Together we will renew America’s purpose.”

This is a fabulous quote from Shrub because it is so accurate. Well, perhaps “accurate” isn’t exactly the correct word because, like much of what W said, it wasn’t, well, accurate. Unless you think getting America into unnecessary wars and nearly bankrupting the nation are both part of America’s purpose.

As everyone knows, that is an absolutely-positively true statement. After all, the guy was born in the section of Texas called New Haven, Connecticut. He also attended Phillips Academy in the corner of Texas called Andover, Massachusetts. And let us not overlook the fact that he attended those great Texas institutions of higher learning known as Yale University and Harvard University.

Again, completely true and verifiable, assuming the nation being served was the military-industrial complex. With non-stop warfare and off-the-books spending on weaponry and logistics, he served that crew like crazy. Estimates vary, but W and his fellow war criminals filched around half a trillion dollars from the pockets of most Americans and placed it in the coffers of the defense industry. And the cost of taking care of veterans who have limped home from the Bush wars ticks upward every single day.

Here’s another quote that also seems to be a reference to Bush’s vast war machine expenditures. The use of the word “charge” must refer to putting the wars on a credit card. Using the most conservative estimate, W and cohorts charged $500,000,000,000. And since it was never funded in the nation’s budget, the drain on the nation is even worse than it looks at first glance. (Current estimates of the ultimate cost of the Bush wars are around $4,000,000,000,000. You read that correctly: four trillion dollars.)

5. “I didn’t have Hollywood people come down, I didn’t have an advisor on my staff trying to convert me into some kind of Alpha-Male.”

You know, it would be great fun to mock this statement except nobody can figure out what the hell it means. Moron is as moron says, I guess.

Checking out this ugly product online reveals the fact that other people who have received one of these fanciful recreations of W have posted some interesting comments about it. One of my favorites: “I gave it to my dog as a chew toy and he loves it!” Another nice one: “I have used it to light my fireplace, get dust-bunnies from under the fridge and unclogged my toilet twice!” So take that, liberals — George W. Bush is good for something after all.

The big problem for me is that the damn doll isn’t worth very much. I’ve seen them on eBay for less than a hundred bucks. Kitsch isn’t selling well this year, it seems. But once history marches forward a little and a certain doll’s namesake is finally able to do something right — that is, shuffle off its mortal coil — then perhaps the price tag might climb a bit. Just like the deficit under W.

Not that I would ever do anything to foster such a thing. No, I wish Bush well in his taxpayer-funded retirement. He isn’t screwing up anything as long as he completes his paint-by-numbers canvases. So I’m okay with him continuing to exist despite his having been at the center of a litany of monumental fuck-ups:

* took the nation to war on false pretenses

* responsible for the economic crash and a worldwide recession

* declared “Mission Accomplished” in a war that would last another decade

* withdrew from the 1972 Anti-Ballistic Missile Treaty

* attacked the credibility of U.N. weapons inspectors in Iraq

* tax cuts for the wealthy

* oversaw an assault on reproductive rights

Whew. But republicans aren’t called the party of stupid for nothing.

Yet, despite all of that, I respect the law that says there should be no threats against a current or former president. I’m just saying that for those of us in possession of one of these demonic totems, there are dollars at stake here and the natural course of events will eventually boost some of those dollars. Nothing personal, George, but you can understand why some of us check in on your health from time to time, right? So while you keep on pretending to be an artist, you might also consider some other interesting hobby like, oh, say, training for the National Glass-Chewing Championships. Or going on a hunting trip with Dick Cheney.

Let’s conclude with a quick glance at some of the other extremely valuable information printed on the idiot doll box. For example, the following three statements:

“Do not immerse in water.” Gosh, ya think? But then this is, after all, a product designed for the mentally retarded. “Made in China.” No comment seems necessary for that one. And: “Warning: Choking Hazard – Small Parts. Not For Children Under 3 Years.” If only everything associated with republican candidates came with cautionary language. Perhaps something like: “Warning: GOP May Be Harmful to Your Environmental, Social, Political, Psychological, and Economic Health.”

Meanwhile, Merry War on Christmas, everyone!

This opinion piece is Copr. © 2013 by John Scott G and originally published on eNewsChannels.com – all commercial and reprint rights reserved. Editorial title illustration is Copr. © 2013 by Christopher Simmons. Read more from JSG at: https://enewschannels.com/author/scott-g-the-g-man/ .