eNewsChannels COLUMN: The magnificent pristine fragile Arctic is now in a battle for its LIFE, which will affect all life on Earth, especially the youth. On one side of the Arctic Ring are the super rich oil companies whose track record has proved “beyond a doubt” that their only concern is profits and they are now in manic oil rush fever mode. On the other side, is the way of life of four million Inupiat or Eskimo Peoples who have lived in harmony with Nature for eons, backed by heroic environmentalists, a million earth citizens, and 100 stars. It was launched by Robert Redford, owner of Sundance Ski Area, and Green Peace at the UN’s June’s RIO+20 Earth Summit since it is critical to a Sustainable World we all want. 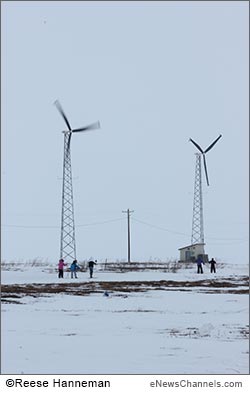 Photo Caption: U.S. Olympic Nordic star Lars Flora teaching some of the 650 Arctic youth the joy of cross-country skiing near a wind turbine in Selawik, north of the Arctic Circle. Credit: © Reese Hanneman.

”Our subsistence for the winter, it all comes from the ocean, the fish and whale. It’s going to ruin our ocean,” 79-year-old Abagail Nashupuq of Point Hope told CNN recently. Nearly half of the world’s whales, the superstars of tourism for ports around the world, rely on the rich ocean foods in the Arctic, which is critical to their cycle of life. And the whales are already endangered by plant of the US Navy (unless we stop them) to do high frequency sound tests along the California, Gulf and Atlantic coasts where the whales of the Americans migrate in the summer to the Arctic. That includes the Beaufort and Chukchi seas where Shell is now sending a dozen ships for exploratory drilling.

Fortunately, Mother Nature forced Shell to postpone drilling by an unexpected thick ice pack. The delay cuts valuable time from Shell, which is operating under U.S. permits which require them to stop drilling in the seas by the end of October. So thank Creator and Mother Earth for that!

This is happening at a time when Alaskans, including villages North of the Arctic Circle, like Selawik, are experimenting with safer renewable wind and solar. And Swiss and US ski areas and Mexican schools who shifted to solar are eliminating energy bills and generating profits. While some oil revenues have helped Alaskan Natives finally get better healthcare and prevention programs, this vital funding could likely continue through safer land based oil drilling and support by humanitarian visionaries, like these stars, becoming aware of their plight.

All the other Arctic countries have enjoyed thriving XC skiing opportunities for decades. Finally, this April 650 Alaskan Arctic youth in four remote villages had a chance to learn how to ski thanks to a team effort of US Nordic Olympian Lars Flora and his 17 volunteer coaches, including US Olympic Biathete, Sara Studebaker, our Native American Olympic Hopeful Mariah Cooper (Lac Courte Oreille-Oneida), the (tribal) NANA Development Corporation, their Maniilaq Diabetes Association, and a few US snowsports manufacturers.

Said NANA Development Director Robin Kornfield, “Health challenges including diabetes and substance abuse have taken a toll among the Inupiat youth shifting to a modern world, concern about changes from their permafrost melting in our region, and lack of exciting opportunities during our eight months of winter. That is why Nordic skiing is an ideal, healthful way for more to get out and enjoy the spectacular country.”

Sweden was first to shift from nuclear to renewable energy, and this year they took another bold step toward a sustainable world with their announcement of also becoming Oil-Free! Meanwhile companies like Shell Oil are jockeying to spend billions, against the expressed will of the majority of citizens of the US and other countries, to subsidize with taxpayers monies, this offshore oil exploration to force us to stay dependent on expensive dinosaur technologies that threaten life on earth.

Mourned a NASA scientist, what happened to integrity, including with Nature? Oil companies are fully aware that they are accelerating the melting of the glaciers and snowsports, which will soon submerge more islands and then coastal cities where most of the earth’s population lives, including their own children.

The Earth is shifting to a milder climate and we can prolong our way of life if we act wisely and in unity now. Or we can further enable a handful of trillionaires to get richer. That is where public outcry is critical to ensure they put people instead of corporations first by insisting our leaders make investing in safe cost-effective renewables Priority One! The French have one of the best healthcare systems because their citizens have screamed the loudest when logic fails.

While there are some short term perks from offshore drilling, the wise Inupiat Elders around Pt. Hope told CNN, “Hell No to offshore drilling” since it puts them one spill away from death to their subsistence way of life, learning from the Exxon-Valdez Spill in 1989. The Southern Alaskan coast has still not recovered, and ALL the cleanup workers have died because they also used the “lethal” Corexit dispersant. Knowing this, BP again used it in the Gulf to submerge the vastness of the oil to hide and reduce the cost of their liability. Scientists say it settles and devastates all the marine life on the floor of the ocean, why Corexit is banned in Europe. And instead of collecting and salvaging much of Gulf’s valuable oil spill through Kevin Costner’s humane effective way, BP used Corexit, demonstrating over and over that profits take priority over people and eco-systems.

Plus Exxon never reimbursed Alaskans for their losses even after they won a costly court case! Shell and others want to do similar untested deep water drilling as the Gulf, which was already at super high risk and resulted in the biggest catastrophe in history next to Fukushima. Then add the untested ice factor, where questions have been raised on how they could possibly recover any spill under the ice.

Pete Slaiby, the vice president of Shell Oil in Alaska, admitted to CNN in July that drilling in the Arctic would be the “most complex, most difficult wells we’ve drilled in company history.” And one of the ships Shell plans to use to drill in the Arctic slipped its mooring and apparently grounded on the beach in the Aleutian Islands.

While Shell says it’s pretty safe, you be the judge also considering: Shell is responsible for the largest spill in the UK’s recent history in the North Sea, and is currently facing a $5 billion fine for leaking 40,000 barrels of crude into Nigerian waters last December.

That is why the high point of RIO’s Earth Summit on June 20, was 100 stars, including Sir Paul McCartney, Edward Norton and Penelope Cruz, campaigning to put a “Global Sanctuary” around the North Pole. Redford teamed with Greenpeace to include in the sanctuary a ban on industrial fishing and offshore drilling since burning oil is a main cause of the Arctic and world’s glaciers melting and many ski areas losing their snow.

“This would help protect the rights of four million Indigenous Peoples who live there,” said Greenpeace International executive director Kumi Naidoo, who invites you to heroicly help preserve the Arctic, along with creating two million signatures on: http://www.savethearctic.org

In the case of a spill, even if there was a chance of beating in court Shell, the world’s richest oil company, GP’s Phil Kline says, “Extinction is forever.” Besides protecting and planting trees, preserving the Arctic is key to “Climate Justice” and the future we all want, said many global youth groups at RIO+20.

Wholesome sports opportunities that keep Native youth clean, lean and healthy to preserve our traditional connection to Mother Earth, is also critical the Elders say. That is why the XC Ski launch, given the long Arctic winters, was also a dream come true for our Native American Olympic Team Foundation (Naotf.org), which assisted after inspiring many enlightened ski areas in the lower 48 and Canada to share the joy of skiing and boarding with their nearby tribal youth. That thoughtfulness has inspired the Elders to pricelessly help save ski areas from droughts for the last 15 years, including Redford’s Sundance, thanks also to his good karma supporting Native American Filmmakers. And the UN has encouraged us to spread their “Snowdance Phenomena” to communities worldwide to inspire them to live in more harmony with Nature. http://naotf.org/articles/Elders-15-Green-MandatesRIO-20.pdf

The consensus of the UN’s 192 member states is that it takes science combined with Ancient Wisdom through the tribes to regenerate Mother Earth.” See more on the jubilant Arctic XC Ski program in Part 2.

Therefore, this Global Sanctuary is the only sane solution to live in harmony with Nature by preventing a 21st Century Gold Rush type feeding frenzy that would quickly kiss the Arctic and our Civilization as we know it, goodbye. But through our timely action and prayers done the Elders way of joyfully thanking Creator and Mother Earth in advance, our stunning Planet can phenomenally rise!

Article is Copr. © 2012 by Olympic Skier Suzy “Chapstick” Chaffee, and originally published on eNewsChannels.com – all commercial and reprint rights reserved. Story has not been re-edited by ENC staff and has been published as provided by the author.