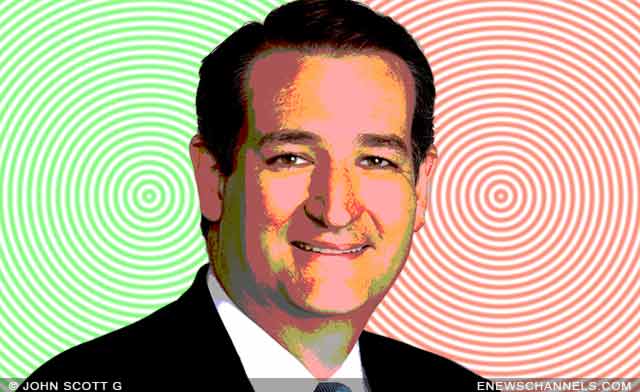 Senator Shutdown (A.K.A. Ted Cruz) announced his campaign for the U.S. Taliban Party nomination and there has been an explosion of helpful suggestions on the Internet. FOAD is, of course, the most prevalent. But many others are hilarious.

On Monday, March 23, 2015, Ted Cruz (Senator, TX and Calgary) uttered the fateful and frightful words, “I am running for president of the United States.” Immediately, the floodgates opened on social media and out poured an amazing tsunami of aid for the rightwing demagogue.

It seems that millions of Americans want to share in the excitement surrounding the first member of this season’s Republican clown car cavalcade.

Within seconds, #TedCruzCampaignSlogans began trending on Twitter, with a delicious assortment of slogans and hashtags appearing from all parts of the country.

Among the helpful ideas freely provided for the RWNJ candidate to utilize on the campaign trail:

~ For a Whiter Tomorrow

~ Not only will I regulate your uterus but I’ll recite Dr. Seuss while I’m doing it

~ Because someone has to bring on the Apocalypse

~ Unemployment down, stocks up, fewer uninsured? Time for a change!

Perhaps the biggest laugh came from a poster reading “Cruz/Palin 2016 — Paid for by the Hillary Clinton for President Committee.”

(TWEET by @jsavite – original artist not known; please let us know who originator is!)

Jon Stewart on “The Daily Show” had a nice summary of the event when he noted that the audience was comprised of students at Liberty University who were compelled to attend the announcement. Further irony emerged as the captive students were asked by Cruz to send a text message to an unspecified source that would then capture their data for unspecified use of their private information. Because, you know, freedom.

I had already been tagging posts about Senator Shutdown with #DreadCruz and the one that’s now on a t-shirt, #YouCruzYouLose, but the torrent of help from the rest of you is so awe-inspiring that I will gladly defer to popular choice.

In closing, allow me to say that my favorite Cruz campaign slogans are some of the scatological ones — but let’s not go there. After all, not everyone wants to get any Santorum on their hands.