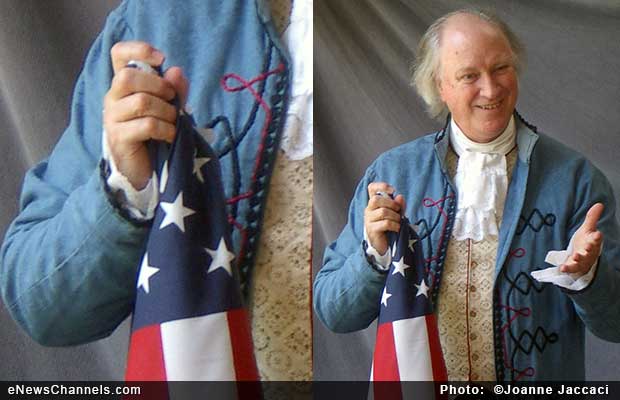 OPINION: On this 4th of July, wouldn’t it be a dream come true for the U.S. and many World Citizens if President Thomas Jefferson, the author of our Declaration of independence and Bill of Rights, came back at this pivotal time to coach us on getting our Grand Experiment in Democracy back on course?

To my surprise, a little book, America Awake! – A Declaration of Interdependence, recently landed on my doorstep from my Vermont ski friend August ‘Gus’ Jaccaci. It was about Jefferson returning in 2008 – just when President Obama was elected, a huge maturation leap in healing our American soul when hopes were so high, even worldwide – to help us finally realize our shining potential.

PHOTO Caption: President Jefferson sharing how Americans this 4th of July can help get our Democracy back on True North through Harvard’s August “Gus” Jaccaci in his acclaimed world show. Photo: © Joanne Jaccaci.

Jefferson’s sharing some no holds barred advice on how we can navigate through this evolutionary moment, made my heart sing. A former assistant dean of Harvard admissions and coach of my brother Kim’s winningest ski team in history, who encouraged his invention of fish-friendly river power, Gus said he received this information on and after the 4th of July of 2007.

Many feel that Jefferson and a few of our other Founding Fathers were divinely inspired in writing the 1776 Declaration. Plus those who work and visit Jefferson’s magnificent Monticello Gardens in Virginia, have mentioned feeling his intense energy there. He was also the Father of U.S. Botany and every night this visionary would contemplate surrounded by his garden of Eden of divine tasting organic heirlooms (original seeds), and hybrids of fruits, vegetables, and herbs of the Americas that he collected and preserved for humanity, next to Nature’s perfect wildflower fields. So I called a number of friends who love Jefferson and study his letters, arguments and laws, and read them some excerpts. They agreed that “his words sounded very genuine.”

What lends even more credibility to Jefferson’s latest words, is that for 20 years Jaccaci did a one man show around the world about Jefferson coming back in 2040, when war had been abolished and free energy transformed prosperity of the few to the many! Coincidentally, Jaccaci shared his Harvard Admissions post with his friend Senator Tim Wirth, now head of the UN Foundation, funded by Ted Turner, who called for a Department of Peace to help end war (that just continues the cycle of terrorism like Boston). Gus recently ran for Governor of Vermont and the US House incorporating many of Jefferson’s latest ideas on his platform, including using nature’s cooperative model of government, virtually free solar energy, and banning war since over half of our budget is spent on this ineffective obsolete way of solving conflict.

Restorative Justice, invented by the tribes, brought back by the PeaceAlliance.org, is however, working beautifully to compassionately solve conflict, along with sports and the Arts exchanges – costing a fraction. 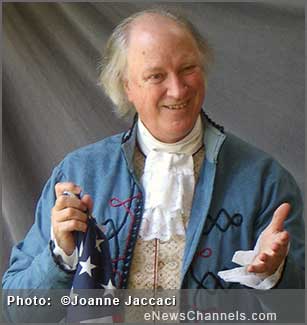 Jaccaci’s Show across the U.S. was about Jefferson, dressed 1700’s style, running for President in 2008, which culminated on the steps of Harvard’s Widener Library where he was greatly celebrated, including in the AP story, “Dead President Seeks Third Term.”

Thinking that President Obama, who attended Harvard Law School would get a kick out of that and especially appreciate how Jefferson in Jaccaci’s book apologized for not freeing his slaves because he said he hadn’t matured enough, (more text below), I felt compelled to send the book to President Obama through a White House friend, as a 4th of July gift from President Jefferson.

Speaking of enslavement, I didn’t see where Jefferson also apologized to American women for not being mature enough to see our ancestors as equals, by leaving them out of the democratic model they copied from the Iroquois, whose yin-yang balance, including Native women always participating in empowering sports, was essential to birthing the most advanced form of democracy. So hello Mr. Jefferson!

Yet his following insights evolved to glorifying all life, like Indigenous Peoples. And to President Obama’s maturation credit, thanks also to Michelle, he brilliantly challenged the UN to launch last October the UN’s Global Girl Empowerment Initiative modeled after our Title IX. (See stories on NAOTF.org)

Yes Jefferson has come a phenomenal way as you will further see by these following impassioned insights, which he whispered in Jaccaci’s ear from his eagle-like perspective, since our souls never die, to help us rediscover our True North:

LIFE, LIBERTY AND THE PURSUIT OF HAPPINESS!

Over the years, I have taken some deep satisfaction that the phrase, ‘life, liberty and the pursuit of happiness’ has been understood worldwide as the definition of the great American experiment in self-government and as a call to the people of the world to free ourselves.

So it is disappointing to me, nay, horrifying, that Americans today are more embroiled in the purveying of death than the glorification of life, more enslaved to war and oil and money than liberating themselves and the world’s people to seek out their own soul’s potential. That apparent regression signals a mortal wounding of the American soul. Human well-being is dependent on the mutual and all-encompassing embrace of all life on earth, all liberty on earth, and all happiness on earth.

When the American soul finally awakened to the crime of slavery, it struggled for freedom by climbing over the corpses of more soldiers lost than in all American wars combined. I was not man enough nor morally mature enough in my lifetime to fully face that primal challenge to life, to liberty or to the pursuit of happiness, to free my slaves.

Now the American soul faces a more primal challenge than ever in human history, for America is enslaved by war. What does a soul do having committed a premeditated preemptive war? You are now slaves to war by less than a dozen men. You seem powerless in the face of our supposedly elected representatives to free yourselves from any calamity. America does not mean sleeping through senseless murder. Where are you Americans, the world needs you to wake up?

America is not a superpower. There is only one enduring superpower and she is Mother Earth. The environment is the economy and the economy is the environment. Only since the industrialization of manufacturing has humanity lost that primal one-to-one. All that is on and within the earth’s land and water and air is all that is on and within your bodies. We are interdependent.

There is little hope of humanity’s future if you do not venture to walk barefoot in the grass and bareheaded in the rain when your soul feels dull and lost. For the primacy of that simple joy is the pathway toward the joy of planting and growing something. It is the same joy as your affection for and from animals you care about. Slowly and surely, your heart and soul will come alive as these friendships with life widen and deepen. Simple as they are, these acts of kinship are the seeds of your salvation.

When America, the greatest military and economic nation in history, turns to the abolition of war, one war-free community at a time, the United States military will become even larger and more valuable because it will transform into the business of living beyond the business of killing in hundreds and hundreds of beneficial ways. This American victory of military maturation will be so courageous and triumphant, it will ring the bell of liberty through future generations liberated in great gratitude. There will be a transformation of capitalism into the optimization of all life on Earth. Free energy is the key to the kingdom of transcendent maturation and successful conscious evolution. Shifting our values from money and property to wisdom and health, from the obsession with material to the celebration of the spiritual, will return joy and pride to the wounded souls of all Americans.

Health is the new wealth. To seek wholeness is holiness. Health is not a commodity to be bought and sold: it is a divine right not to be stolen or denied by anyone for any reason. Anyone or group that put themselves between life and its health is a gatekeeper of hell.

There is no other species of life on earth that would give away the security and fulfillment of life to some distant member of its kind. It is precisely such taxation through distant presumed authority and representation by members of the distant English Parliament which caused the grievances that led to America’s fight to the triumph of independence.

The solution to all difficulties and acts of injustice returns to the local community, given the higher authorities are so constrained by corruption and greed. It returns to the local community to feed, clothe, shelter, educate and heal itself. Then in unity, vitality and wholeness, the communities of America, self-sufficient, self-reliant and self-governed will weave the web of safety and sanctity for which this noble country was founded.

So Americans as social architects, you are faced with the design of a planetary renaissance to benefit all life on earth. Look then to nature for the working ideals of design, the eternal archetypes of order like honeycones and beaver dams. If you build anything, build it with a web of love and it will be ephemeral and timeless, momentary and enduring. Buckminster Fuller is the Leonardo de Vince of modern times who said that love is the steel of the twenty-first century.

Some generations win impossible wars against impossible odds. One generation among you broke the spell of holy Earth and walked on the moon. You are the salvation generations. America means love,” declared President Jefferson.

On behalf of Americans and democracies ‘spring’-ing up worldwide, thank you dearly President Jefferson, Gus and the Iroquois for lighting the way. After feeling compelled to be a lifelong happy activist, and then experienced an energizing renaissance in the last year by learning to grow and have a loving relationship with 21 (carbon-diminishing) delicious organic fruits trees, veggies and herbs on my terrace, I appreciate Jefferson’s insights even more. How Jefferson feels about GMOs is self-evident!

In fact, I am now going to make a pilgrimage to Jefferson’s Monticello, which provided the heirloom seeds for First Lady Michelle’s Organic White House Children’s Garden and their Kitchen Garden, to thank him. South African-born musician Dave Matthews will be speaking there at this 4th of July fun festivities. http://www.monticello.org/site/visit/july-4th-monticello

Since banning war is critical to focus on regenerating All Life on Mother Earth for our children, and our beloved First Father, President Washington first proposed that “war be banished from this earth,” here is chance to be part a maturation leap by signing your John Hancock on this petition to create a U.S. Department of Peace-building (after 90 bills were proposed), through finally passing Bill HR 808 on this 4th of July. Then your celebration will be filled with Amazing Grace!

Article is Copr. © 2013 by Olympian Suzy Chaffee and originally published on eNewsChannels.com – all commercial and reprint rights reserved. Please link back to this page rather than copying our content. To contact Suzy: suzynativevoices@aol.com, or visit her charity at: http://naotf.org . Photo: © Joanne Jaccaci; collage by Christopher L. Simmons. Updated 10am PDT 7.3.13 for minor items per author request.