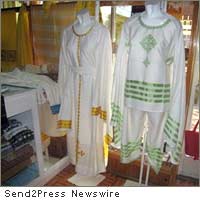 The Marketplace debuts alongside “Afrika-Tage-Wien,” building on the successful 2009 launch of African Crafts by the World Crafts Council concurrently with “Afrika-Tage-Wien.” The “Afrika-Tage-Wein” continues to grow in strength, consistently attracting an influx of visitors and specialty retail buyers.

“The Afrika-Tage-Wein provides the African Culture a great platform to learn about the people and their social situation, their businesses, music, art, and not the least, the culinary specialties of the continent up close,” comments His Excellency, Werner Faymann, Federal Chancellor of Austria.

The mission of the World Women Trade Fair (www.worldwomentradefair.com) is to provide economic opportunities to women living in third-world countries and to assist them to gradually build a broad-based market. In addition, the World Women Trade Fair offers export market-orientation training which is a component of their Global Market Access Initiative offering skills training and information to access global markets.

“The Women of Africa Marketplace is a touring exhibition and marketplace that addresses the aspiration and needs of African Women Entrepreneurs who prefer face-to-face way of doing business,” Margaret Galabe, Executive Director, World Women Trade Fair explained, “but, it is also important to the women artisans to sell their quality handcrafted products directly without intermediaries.”

At the Marketplace, World Women Trade Fair will have 100 vendors from various countries in the African continent, and the Indian Ocean States of Seychelles, Mauritius and Reunion represented. For example, Ethiopia will present tibels hand-woven textile, the women of Ethiopia revived their ancient traditional weaving and skills to create jobs and to re-build their communities.

A wide array of products for sale range from hand-crafted fashion and decorative accessories, gifts, folk arts and crafts, to intricately-beaded jewelry and dolls and elaborately-woven baskets.