DALLAS, Texas — Competitive boys and girls who want to improve their basketball skills with the hope of playing at the college level one day, will participate in a training camp and competition that will qualify them for a national event. The “2009 Adidas Jr. Phenom and Phenom150 Regional Exposure Camp for Boys and Girls” has a limited number of openings for boys in grades 5th to 10th and girls in 6th to 12th grade. Participants will spend two full days of training and competition against the best players in the region, according to Adidas regional director Reginald Grigsby. 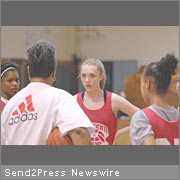 “The 2009 Texas Adidas Phenom Regional Qualifier was created to give players in Texas, Arkansas, Oklahoma and Louisiana an opportunity to test their skills and game against the best players in the region,” said Grigsby.

The camp is highly recommended for competitive players who hope to qualify for an invitation to the prestigious National Adidas Jr. Phenom and Phenom150 Camps held every August in San Diego, California. The only way to get to the national event is by attending their regional camp, according to Grigsby.

“All players wanting an invitation to the National Adidas Jr. Phenom and Phenom150 Camps must participate in their regional qualifier camp. There are no exceptions,” he explained.

The Texas Adidas Jr. Phenom and Phenom150 Regional will give each player a barometer of how they measure and rank with the top players in the region.

He warned that there are only 75 openings in each age group and the spaces are filled very quickly. The Regional camp is hosted only one time a year.