eNewsChannels COLUMN: Ideas and opinions come flying at you non-stop in Mark Morford’s essays. His eye-opening concepts are presented with slashing images and hyperbolic language. This results in delightful shock waves for the brain and jarring karma for the soul. 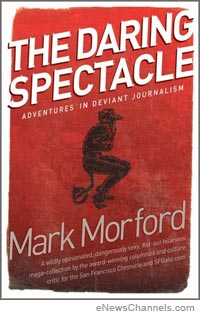 Words as weapons of social redemption. That’s what you will find in the wild and witty tumble of exquisite prose flowing from the mind of Mark Morford, surely one of the most erudite fellows to ever create a newspaper column that has censors continually on the edge of their chairs. Twice each week, you can count on Morford to serve up a brilliantly written essay that is life-affirming while often chock-full of bile and battery.

There is so much evil in the world that Morford is compelled to rail against it time and time again in the hope that someone will join in his sweet song of satire so that there can be a Movement, a Revolution, or even just s series of Strongly-Worded Letters to the Editor. Or perhaps it’s enough that he generates a few collective sighs of recognition that there is another soul in the universe who calls out the mistakes, mismanagement, and megalomania of people with more power than humanity.

While oodles of readers share in his disgust for all things repressive, there are also large numbers of people who find his views a tad upsetting, such as those in cahoots with conglomerates, religions, right-wing politics, and police states. Needless to say, when the GOP is finally installed as the social enforcers for the mega churches and multi-national corporations, Mr. Morford will be among the very first who will be whisked away to a re-education camp.

In the meantime, he writes an explosive column in the San Francisco Chronicle (print) and SFGate (online) where his work is regularly excoriated by greedwhores and jesusfreaks throughout the English-speaking world.

All of the nearly 100 essays in this collection are excellent or better. All are thought-provoking as well as entertaining. Many are impassioned attacks on the appalling avarice and power-lust of people like the Koch brothers, Roger Ailes, Karl Rove, Carl Forti, Antonin Scalia, Clarence Thomas, Pat Robertson, and the many others of their ilk.

With an artful presentation of the facts, he always manages to make his case with the linguistic equivalent of a fusillade of venom-tipped dueling swords. Sometimes it gets personal. Consider this tidy little description of Dick “Puppetmaster” Cheney and his “hunting” trips:

Dick and about nine other overfed white guys sitting in a comfy luxury blind with their manly shotguns, waiting for the Westmoreland guy stationed behind them on a hill to release clusters of stunned, fat, tame game birds from a net. Then they shoot them. Lots and lots of them. And then they slap each other on the back. And they grunt and say nice shot as the birds drop like flies as dogs race back and forth hauling dead or dying birds into huge piles. What fun.

Time and time again, Morford reveals Truth, Anti-Beauty, and the American Way of doom, death, decay, and destruction that is being carried out in the name of power and profit.

The most heated debate seems to arise from his columns exposing the hypocrisy, hatred and fear-mongering of the right. However, Morford will also gleefully deliver a head-slapping turnaround into positivity. Consider this excerpt from one of his columns offering us an optimistic way of looking at the world:

Realize that for every ongoing war and religious outrage and environmental devastation and bogus Iraqi attack plan, there are a thousand counter-balancing acts of staggering generosity and humanity and art and beauty happening all over the world, right now, on a breathtaking scale, from flower box to cathedral.

Other columns take a comedic turn, while still upholding the Morford tradition of attacking trolls and troglodytes wherever he may discover them:

I say our culture needs psycho parents and their preening, hyperplucked kids, simply because the culture needs future Paris Hiltons and Lindsay Lohans and spoiled UCLA sorority girls with names like Dakota and Bree because, well, who else will we mock? . . . Who will grow up to date all the obnoxious frat guys and have lousy drunken sex with them for 3.2 minutes and later marry and soon contribute to prescription med statistics and America’s fine Christian divorce rate?

Email from the Dark Side

One of the ironies of the modern age is that many people who are most harmed by the policies and practices of the conservatives are tricked into voting for them. Much of this lunacy is fueled by religiosity mutants, all of whom are excoriated in in this book, and many of whom regularly send vicious, if grammatically inept, hate letters to Morford, who gleefully includes some examples of them. As he puts it:

Scattered like intellectual potholes throughout TDS, you’ll find a very bleak bizarro-world where everything is backwards and phlegmy and violent and sad. . . This is my hate mail. A premium sampling, a few dozen of the nastiest, most nauseating, hilarious, vile hunks of spittle I’ve received over the years. It is something to behold.

It is, indeed, a sore sight for any eyes. I couldn’t finish some of the letters. Too disgusting.

Morford writes in a style that is a titillating threat to the casual reader. I’ve sent his columns to some folks who have responded by saying “That was great but I’m exhausted after reading it!” The phrases come flying at you in squadrons, carrying you along on waves of emotion, elation, rage, and righteousness. This guy uses nouns, verbs and adjectives like bullets, sentences like stinger missiles, and paragraphs like cluster bombs.

When a writer decides to try altering the public consciousness, the approach often goes in one of two directions: either horror story or tug-at-the-heartstrings. Morford alternates between the two but does so with such dynamism that the effect is almost the same as a combination. In any case, his writing argues from the human side of each issue while not overlooking the social, political, and emotional positions.

You can judge the superb quality of his work by opening the book to any page at random and diving into his rivers of ruminations. I also think you can judge the effectiveness of his arguments by looking at the effluvia of those who attack him.

Sprinkled through the book you will find a fine collection of haiku, the unrhymed Japanese-derived verse arranged into three lines of five/seven/five syllables. I know what some of you are thinking: Yipes! Poetry warning! Be advised that these are quite special in that they are what Morford calls Mullet Haiku. And they are hysterical. Examples:

Dang! Your tube top is

making me want to forget

that you’re my cousin

and my own personal favorite for its cinematic presentation:

Taunts me with its brand new face

Hand me my damn gun

The Yang and the Yin

Article is Copr. © 2011 by John Scott G and originally published on eNewsChannels.com – all commercial rights reserved.