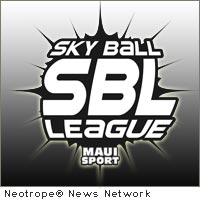 LOS ANGELES, Calif. /eNewsChannels/ — The Tampa Dragons, a new team in the up-and-coming national Sky Ball League, can be seen battling the Los Angeles 405’s in the Sky Ball League semi-finals (previously taped in L.A.) airing August 20 and 27, 2011, in Florida on the Fox Sports Network, on WTVT-13 in Tampa and on DIRECTV nationwide (check local listings for times).

The Dragons consist of 5 male and 3 female Tampa locals who were selected from over a hundred hopefuls to compete in the first season of this already popular next generation coed sport.

Brian Dunkleman, one of the original co-hosts of American Idol, hosts the 16 episodes in the Sky Ball League series, which was created by Brian Kessler, who designed the Sky Ball, and sports executive Danny Swartz. “Sky Ball is an energetic combination of basketball, baseball and volleyball, with a little lacrosse thrown in,” says Kessler. “The game uses Sky Balls and smash gloves and is played on a court with goals set at each end that consist of three scoring pads 12 feet to 17 feet high.”

Slightly larger than a softball and constructed of a special combination of plastic and rubber material that is pumped with oxygen and helium, Sky Balls are capable of bouncing up to 75 feet. “Besides the requisite physical dexterity, the challenge to players,” says Swartz, “is that they must not only excel in controlling the ball, but the skillful manipulation of a challenging piece of equipment.”

“Age knows no bounds,” Kessler adds. “Across the league, this season’s players range between 18 and 39, and neither age nor gender has made a bit of difference on how well anyone plays.”

The four teams that were formed and competed in the first season of Sky Ball League – – are the Tampa Dragons, Austin Starz, Youngstown Ballers and Los Angeles 405s. The final episode in the series will feature the remaining two teams standing, who will compete in the Tournament of Champions in Los Angeles. This final “smack down” determines who gets the winner’s purse of $40,000.

HornBlasters Inc moves its base of operations into metro Tampa, Florida Jun 8, 2020