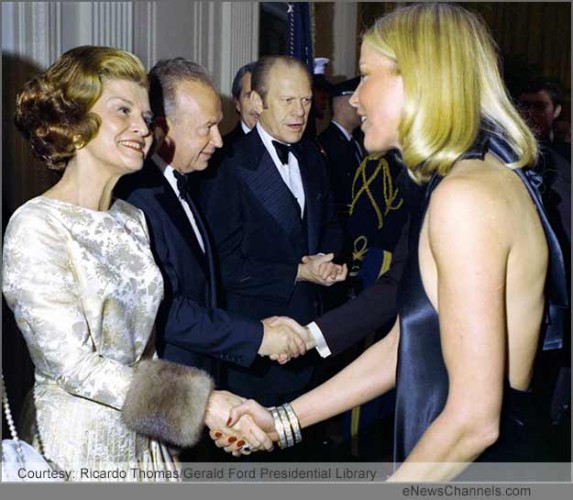 OPINION: People around the world have recently mourned the passing of Whitney, Amy Winehouse, and First Lady Betty Ford, exemplified by the touching New Years Tributes and Grammy Salute to Whitney. With the help of doctors Drew, Phil and Gupte these (celestial) shooting stars left us with priceless lessons to prevent or recover from alcoholism. And I believe they are happy to see that their passing is uncovering solutions that could save millions of children and their families from heartache.

One of the breakthroughs was connecting the dots to finding the root to this pipeline to alcohol, drugs, abuse, prison and early death: Years of unknowingly overdosing with sugar starting as children.

Thanks to the American Diabetes Association we learned that “The average American consumes 150 pounds of sugar a year.” That means the average 50 year olds – Whitney was 48 – have consumed 7,500 pounds, a barge load of mainly toxic refined sugar has gone through our bloodstreams and organs robbing organs of nutrients. Therefore, that’s likely what messed up the healthy chemistry of Whitney, Amy, Betty as well as U.S. Olympic freestyle skier Jeret Peterson, leading to their “Sugar Blues” swan song. http://www.shirleys-wellness-cafe.com/sugar.htm

Rachael Ray, who created 100 school gardens as an important part of First Lady Michelle’s campaign to reduce obesity, also revealed that “the recommended healthy amount of sugar a day is 15 grams, or four teaspoons -including healthier honey, maple syrup and raw sugars. Yet the average American consumes 168 grams of sugar per day.” There are 40 grams of sugar in most sodas and the U.S. and Mexico are the biggest consumers of colas.

That is why TV hosts like Martha and Cathy Lee plus Good Morning America have used Stevia in recipes to responsibly reduce the sugar grams in delicious drinks and desserts. Plusthe Ritz-Carlton and many cafes, especially in the Pacific Rim, offer Stevia as a healthy alternative. Through awareness they are preventing the sugar highs and lows and mood swings that make children vulnerable to challenges with alcohol, a fermented sugar. Armed with this info, more and more who get this message can enjoy the fruits of their talents and love from family and fans.

First Lady Betty is a hero for creating a national exploration of solutions to alcoholism in the mid 70’s. Her courage coming clean in front of the world at the White House about her addiction to alcohol and prescribed drugs, liberated families who had once kept especially female addictions secret, out of shame. She then put more heart into rehab programs through her Betty Ford Clinic. She also raised my awareness that girls were not getting the sports (and education) opportunities to get natural highs to be psychologically healthy. That helped inspire me to lead the Title IX March for Equal Sports (and Ed) opportunities in 1977, which also lifted families and communities.

In November, Dr Sanjay Gupte’s CNN Special “Deadly Dose,” encouraged by President Clinton, reinforced Betty’s warning about the lethal combination of drugs and alcohol.(CNN reported that grapefruit juice can similarly multiply doses.) Dr. Gupte brought to light that Americans take 80% of the world’s pain killers. Then add alcoholism like Whitney and 23 million Americans, added to 70% of our college students currently predisposed to binge drinking, and no wonder someone dies every 17 minutes in the U.S. from the combo. Plus an alcohol related accident happens every 15 minutes, and more often on reservations.

The cautionary tale of another iconic songbird, Amy Winehouse, renowned for singing “No No No to Rehab” that put her in prison five times and a grave at 27, was that the strain of detoxing after alcohol and drug binging can also be lethal. So it is important to get professional help and build up your immune system with ideally fresh organic fruits and vegetables, since sugar and alcohol rob nutrients. That is why addicts often suffer from malnutrition.

Given a study that “82.6% of those who have attempted suicide were under the influence of alcohol and drugs,” one wonders if the Jeret’s suicide could have been avoided if he grew up consuming a healthy amount of sugar through having access to a natural no carb sweetener that doesn’t raise ones blood sugar.

If Jaret also had the tools to get in touch with his higher self as a youth, perhaps he could he have healed his wounds, which all families have, through forgiveness. Here is a way he and others, besides AA and counseling, could stop the ‘dark night of the soul:’ http://divinecosmos.com/videos

Those with alcoholism and diabetes in their families, like my grandfathers, are more vulnerable, along with the Indigenous and Asians who had more natural diets over the last two millennia. Because diabetes started around Roman times when mainstream cultures had access to stockpiles of sugar, they developed more enzymes to process it. That is why the tribes and Asians are more affected by sugar and alcohol, yet they have heroicly lit the way to now save millions of lives, for which I am deeply grateful.

SECRETS OF SOUTH AMERICANS AND ASIANS

“Blessings on the South American tribes for discovering and sharing Stevia (Rebaudiana), an extraordinary rainforest herb having leaves they have used for the last 1,500 years to sweeten their medicinals and teas. The rebaudiana extract from Stevia is the only known natural sweetener with zero calories, carbohydrates and glycemic index, which gives you zero fluctuations in blood glucose and contributions to any disease,” said my gifted advisor, Olivia Ellis PhD (Cherokee). She is a teacher and Master Gardener and guide at President Jefferson’s Monticello Gardens.

When the Spanish arrived in the 1600’s, they spread this “magical” sweetener worldwide. Asians have been the biggest users of Stevia since the 70s when Japan banned toxic sweeteners Aspartame, Sweet & Low, Equal, and Splenda. Using Stevia to sweeten 40% of their foods from yogurts to baked goods, to colas, they reduced their diabetes, alcoholism and violence thanks also to exercise, baths, and cutting down on meat. Thanks also to China’s becoming the biggest grower of Stevia, many Asians have a decade higher life expectancy than Americans.

DANGER OF SUGAR IMBALANCES IN THE BLOOD

Nutritionists say that habitual overdosing of white refined toxic sugar, mainly from sodas (40 grams of sugar) and processed foods, alters the healthy blood sugar balance of developing youth, making them obese, hypoglycemic, diabetic, and vulnerable to alcoholism. Wanting to get high again sometimes leads to sniffing, drugs and then violence, abuse, prison and early death. The Doctors Show called “the craving for toxic sugary foods similar to that of cocaine and heroin.”

CHANCE TO GROW A GENERATION OF GREEN GENIUSES

Since addictions and their illnesses vampire our energies from being responsible Earth Caretakers, here is a chance to mobilize a generation of green geniuses, like the high school students who invented the 400 mpg electric car for a few thousand dollars. The Siberian mystic Anastasiain the RingingCedars(.com) books, says that by being pure of body and spirit from also spending time in Nature, the secrets/creativity of the universe open to us. Native peoples agree.

I don’t drink or do drugs since I found the few things I’ve tried never got me higher than I feel when fulfilling my dreams, especially being of service. Plus alcohol puts me to sleep, and healthier beverages taste better. I first became aware of the signs of alcoholism at 20 when I wondered why my brilliant boyfriend repeated himself a lot. Harry Belafonte admitted on Katie that, “what woke me up was a friend sharing, ‘You have sinned against your talent!’”

A June 2011 study verified that “processed sugar causes brain damage, memory loss, and depression. Therefore, reducing or substituting sugar with Stevia raises our IQs and sunny outlook on life. Those are some of the reasons why Good Morning America TV show called the Stevia the “Holy Grail of Sweeteners.”

The healthiest Stevias are organic and use the whole leaf which has anti-plaque, bacteria and viral properties. No fillers, except for inulin fiber, a prebiotic and Chromium a digestive aid. The most affordable organic leaders are: NOW Foods(.com), Sweatleaf, Wholesome and KAL. Stevias come in packets and shakers, (avoid liquid with alcohol), yummy organic Cocoa-Stevia drink powder and organic Berry Stevia Drink Sticks and teas.

You can also find Stevia sweeteners at gyms, grocery stores, supermarkets and super discount stores. Healthfood stores also have the tastiest organic and all natural Stevia beverages with zero carbs like: Zevia with 15 flavors includingcolas (also in Canada and Mexico) and Steiz. In Mexico Bonafant has teas and fruit juices with Stevia.

A Mexican-American teacher heroically got sugary soda machines banned from the LA School District around 2003, which surprisingly “reduced violence in the schools by 65%,” reported NPR. Since Stevia uniquely prevents these energy and emotion swings, both could reduce bullying and our tragic student shooting sprees.

Having flexed our wisdom to save the U.S. election and preserve women’s rights, moms now have a chance to also reduce violence against women, send more sons to colleges instead of prisons, and be 65% more peace-loving through diet choices. By also redirecting monies wasted on war, crime and prison toward renewables, FREE healthcare, healthy schools – 1/3 of U.S. schools are dangerously toxic – we are bringing in the New Era.

The other keys to creating psychologically healthy children: Daily sports plus Arts in schools, time in Nature, plus giving gratitude and our gift to humanity. Carl Jung, the Swiss Father of Psychology and AA realized this while living with a Taos Pueblo Chief’s family.

The soda machine ban then spread thanks to parents wanting to protect their children and reduce schools pressuring gifted kids to take the mind-dulling toxic drug Ritalin. Michael Phelps, Tom Cruise and Will I Am had ADHD but their moms fiercely resisted doping them.

The bans resulted in Coke and Pepsi launching their (more processed) Stevia called Truvia, and PepsiCo PureVia in a table top sweetener and their new zero carb or reduced carb drinks in U.S. and many countries: http://online.wsj.com/article/SB122955049250715515.html

PepsiCo’s Stevia/Purvia is in SoBe LifeWater and Trop50, and Dr Pepper’s Stevia/Rebiana drinks include Snapple and All Sport Naturally Zero.

Websites may have store locations.But ALWAYS check the type of sweetener in “Ingredients.”

My raising awareness about Stevia was motivated by losing my dear friend Scott Newman while he was making a comeback from substance abuse. I also wondered why I found myself engaged to two wonderful men who turned out to have alcohol challenges. In the Indian tradition your name is your job. My Olympic mother’s name was Stevia, like my middle name. Since we have all lost loved ones, I believe they are united with Whitney, Amy, Jaret, and First Lady Betty, in guiding us. Together we can help children steer clear of the sugar pipeline so their pure genius can help us win this “Super Bowl of Life.”

Hail to the Latin American Tribes for sharing their Holy Grail of Sweeteners to help our lean, clean magnificent Earth Family bring in a breathtaking New Dawn.

Article is Copr. © 2013 by Suzy Chaffee, and originally published on eNewsChannels.com. All commercial and reprint rights reserved. To contact Suzy: suzynativevoices@aol.com.