LOS ANGELES, Calif. — Dr. Madan Kataria, creator of Laughter Yoga, has long dreamt of having simultaneous laughter sessions in different parts of the world. “I wished for major television channels like BBC and CNN to telecast all laughter celebrations and reach out to the people in every corner of the globe,” says Kataria. “The dream I long cherished was fulfilled on May 10th when I received a surprise invitation for doing a global laughter session on Pangea Day in Los Angeles. My goal is to have one million laughter clubs around the world within the next ten years,” said Dr. Madan Kataria at Pangea Day 2008 as he addressed millions of people via satellite on Saturday, May 10, from Stage 15 at Sony Studios. He and actress Goldie Hawn led the audience in several moments of roaring laughter across the planet. “I couldn’t have asked for more,” said Kataria.

This was a historical moment because millions witnessed the live show and participated in the laughter session through television, the internet and You Tube. For the first time in the history of our world, representatives of the human race laughed together, on all continents, in real-time, for world peace and harmony. The powerful sound of laughter resonated globally and established a connection among people. It helped to bring the world a little closer. 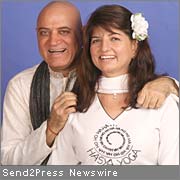 “When you laugh, you change,” Kataria told the crowd “When you change, the whole world changes around you.”

Pangea Day is a global initiative for world peace that unites people worldwide through the power of cinema. It helps to increase tolerance and compassion amongst the people divided by the conflict and other differences. One of the films shown at Pangea Day was about the Laughter Yoga movement. It was titled “Laughter Clubs” and was directed by Canadian filmmaker Neil Davenport.

The event was broadcast live in 7 languages across the globe. It linked Cairo, Kigali, London, Los Angeles, Mumbai, and Rio de Janeiro by a program of powerful films, live music and visionary speakers.

There are currently over 6,000 Laughter Clubs in 60 countries, and growing. 350 are in the USA including several in Georgia. Laughter Clubs are generally free and open to the public. All are 100% independent.

Certified Laughter Yoga Teacher Craig Whitley says the classes are about people coming together to laugh as a form of exercise. “We laugh for the health of it, without using jokes or comedy.” He adds: “there is a huge need these days for what Laughter Clubs have to offer. They help people feel better physically, mentally and emotionally. The clubs also help fill the need for social connection, something that is lacking in our society today.” Whitley and his wife Helen, a licensed clinical social worker run a free weekly Laughter Club in Woodstock, GA.

Ten good reasons to laugh for no reason

1. Laughter is a stress buster. It reduces the levels of stress hormones epinephrine and cortisol.

3. Laughter is anti-aging. It increases blood supply to the face, nourishing the skin and making it glow.

8. Laughter Yoga makes us more creative and imaginative. It improves our sense of humor.

9. Laughter shrinks the hurts of everyday life to a smaller, if not inconsequential size. It interrupts the power struggle and defuses anger by releasing it.

For more information, or to find a laughter club near you go to http://www.laughteryoga.org.