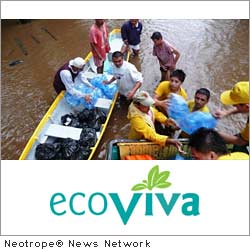 JIQUILISCO, El Salvador /eNewsChannels/ — A tropical depression in the Pacific, coupled with a weather front stemming from Hurricane Jova in the Atlantic, converged on El Salvador this weekend to cause what appears to be the largest disaster in a generation. EcoViva, an international development organization based in Oakland, California, has been in close contact with its local partner organization in Jiquilisco, the Mangrove Association, to assess damages and raise funds for both immediate relief and future reconstruction.

At of this morning, the region had seen over 1.2 meters of rainfall accumulate over a seven day period, far eclipsing the historic impact of Hurricane Mitch in 1998 which saw the accumulation of 0.86 meters of rain. Government civil protection authorities estimate that over 48,000 people throughout El Salvador are now crowding into a system of over 500 flood shelters. The number of reported fatalities is currently 32, with two people reported as missing. Areas hardest hit by flood waters include the provinces of La Paz, Sonsonate and Usulutan.

On Saturday, October 15, the President of El Salvador declared a state of emergency across the nation, with special attention to coastal areas like the Lower Lempa River Basin, located in the state of Usulutan’s Jiquilisco municipality. Approximately 40 villages were completely flooded out in that region. Dozens of communities were cut off from contact for up to 48 hours as roads were completely washed away. For the last four days, community groups have been working with local and federal authorities to reach isolated communities and evacuate everyone effectively.

In the Jiquilisco area, over 7,000 people are currently staying in schools, community centers and other makeshift shelters. Community organizations have been helping coordinate relief efforts as the government’s resources have been slow to arrive.

Government officials from the Ministry of Agriculture and Ministry of Public Works have begun to assess the damage along 17 kilometers of levee systems along the Lempa and San Miguel Rivers. Foreign aid has begun to trickle into the country, and the World Bank has already pledged $25 million to the national efforts. Civil protection authorities are currently estimating the cost of response at nearly $900,000, and the Ministry of Agriculture has assessed crop loss at 40% nationwide.

There is concern that a lack of needed supplies and overcrowding at the shelters could potentially lead to a health crisis. Communities will also face major reconstruction after the flooding subsides. Initial assessments already identify millions of dollars in losses to crops and livestock due to the flooding.

Donations may be made online with a credit card at http://donate.eco-viva.org . Indicate: El Salvador Relief in the comments section.

Mid America Mortgage Donates $250,000 to Services of Hope with Matching Funds from the City of Dallas Oct 1, 2021