NEW YORK, N.Y. — ElectionMall launches new social media tools – great for candidates from school board to President. As technology continues to drive political participation at all levels, the need for the latest tools makes all the difference as candidates, from the school board to the White House, look to engage voters, raise money and win on Election Day. “Thanks to President Obama, everyday is a campaign day,” said Ravi Singh, CEO and founder of ElectionMall(R) Technologies Inc. (EMT). 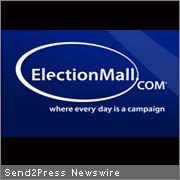 In acknowledgement of this, Founder of Personal Democracy Forum Andrew Rasiej joined Singh in a press conference today at the 6th Annual Personal Democracy Forum (PDF) – which is the world’s largest and best known conference on the intersection of technology and politics – announcing the launch of the Money Bomb(TM) fundraising widget for Facebook(R). Money Bomb(TM) helps campaigns of any size raise money and is compliant with the fundraising rules of the Federal Election Commission as well as state and local laws.

“Money Bomb is a fundraising tool the McCain 2008 campaign wish it had,” Singh said. “Since our systems of election laws are complex, technology needs to accommodate the paradigm shift from large campaigns to smaller ones, simply using the latest technology to empower them with the same tools. Fundraising is the ‘mother’s milk’ of politics in the United States.”

“As we have recently seen in Iran and Europe, technology is changing political participation worldwide,” Singh said. “Technology empowers would-be challengers to compete with incumbents. It allows a candidate to raise the money they will need to compete. A candidate armed with the latest technology can bring down the ‘good ol’ boy,’ and that is what we are doing.”

“With the rise of social networking sites like Facebook, Twitter and YouTube, the question continues to be how you use it – how can you engage users with your message and empower them to participate,” Singh added. “Every candidate wants to emulate the success of the Obama campaign, and ElectionMall is offering those campaigns the right tools at the right time.”

Established in 1999, ElectionMall.com is a non-partisan world leader in providing on demand (SaaS) Internet-based solutions for campaigns and elections worldwide, effectively utilizing technology and business know how to enable candidates, advocacy groups, and nonprofits to generate enhanced gains in awareness, funds, and votes. ElectionMall has 2 registered international patents. ElectionMall has identified over 54 different campaign behaviors and has categorized them into 5 specific product offerings, including: Build, Manage, Raise, Promote and Shop, creating a one-stop-shop that encompasses the entire life-cycle of a campaign. ElectionMall is headquartered in Washington, D.C., Chicago and L.A. with international offices in Brussels, Belgium and Mexico City, Mexico.