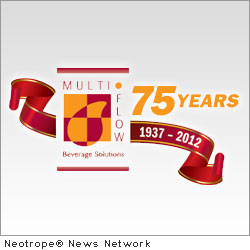 HUNTINGDON VALLEY, Pa. /eNewsChannels/ — The Employees of Multi-Flow Industries, a manufacturer and distributor of fountain-dispensed beverages, are happy to announce their Company’s 75th Year Anniversary.

Multi-Flow was founded in 1937 by United States Navy Veteran Sam Gottlieb in Philadelphia, Pa. Sam’s business has grown to include 11 warehouse operations, along with the 70,000 square foot manufacturing facility located in Huntingdon Valley, Pa. (about 2 miles north of Philadelphia). The company provides direct store delivery to over 6,000 customers, and manufactures product for an additional 14,000 locations.

Although Sam has passed on, his passion for providing quality beverages continues to be exemplified by its nearly 200 employees in 7 states. Upon his retirement in 1990, his son Bernie took command. Upon Sam’s death, Bernie wrote, “Dad could hear a soda system operate and know what was right or wrong. He could look at a building and know the value of the inventory with one walk thru. He could add, subtract, multiply, and divide in his head faster than a calculator. To label Sam would be very difficult. He had an eighth grade education and look at all of his accomplishments.”

In 2008, CMS Companies (based in Wynnewood, Pa.) purchased majority share of Multi-Flow, and brought in a former Pepsi executive to become CEO. Since then, Mark Stephens and his executive team has brought Multi-Flow to record-level revenues and profits by expanding the sales, marketing, manufacturing capability, and net profit that was first begun by Sam Gottlieb in 1937. In honor of Sam’s memory and his accomplishments, the company now gives a “lifetime achievement” award to a handful of employees every April. The award is affectionately called “Sam’s Club.”

Multi-Flow Industries produces branded and private label concentrated Iced Teas, Juices, Carbonated Soft Drinks, Energy Drinks and Fortified Functional Waters in Bag-in-the-Box packages, as well as jugs and cartridges. In addition to the recent “Excellent” rating from Silliker, Multi-Flow Industries has been an OSHA VPP Star Site since 2005. More information on Multi-Flow can be found on the company website at http://www.multiflow.net .